It's time for another update! This one focuses mainly on bug-fixing, although there's balance changes as well.

With our previous update we gave you new co-op missions. If you're a Medium or Hard level DTA / C&C player, you might've noticed that they were a bit easier than usual. Well, we have to admit that since we don't have the quality assurance resources of multi-million dollar game companies, some nasty bugs can sometimes make their way in. These bugs included one that made most co-op missions easier than intended (on Medium and Hard, it didn't affect Easy). With this update we're addressing that bug and a lot of other issues that we have noticed in the last few weeks.

While fiercely destroying each other's and the AI's bases on the battlefield we also noticed that some special units, namely the GDI X-O Powersuit and the Nod Cyborg Prototype, weren't as satisfying to use as they should've been. To solve the problem, they've both received increased stats.

To see the full list of fixes and changes in this update in more detail, check out our change log page. 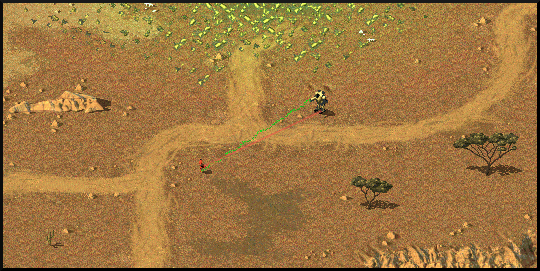 Talking about the X-O Powersuit and the Cyborg Prototype, are they feeling somehow new or confusing to you? Are you a new DTA player that has a hard time figuring out what each new unit does? Or would you just like to refresh your memory and save some time by reading an interactive manual rather than checking the units out in-game? We've got you covered with the new DTA Enhanced Mode Faction Guides. These interactive guides tell you everything essential about every single unit and structure in the game. Click on the links below to view the guides for each of DTA's 4 factions. 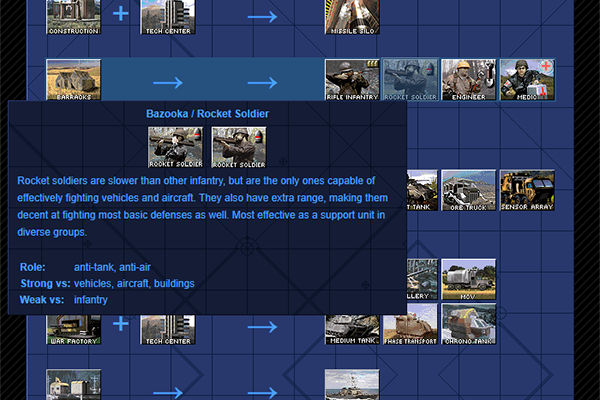 We've also started making videos of each new mission (both singleplayer and co-op) that we make. These videos are not only (hopefully) entertaining to watch, but they also tell you how to beat these somewhat difficult missions of DTA. All the replays are of course going to be on Hard mode, so don't get scared if they look impossible for your skill level; DTA missions scale very well with the different difficulty levels, so on Medium and Easy the missions are far easier than on the Hard mode which we'll record on.

We've already posted our first mission video. It's of the recent Allied single-player mission, named Frostbite. The player in this video happens to be me (Rampastring).

We hope you enjoy latest update and the videos that we'll be putting up in the next months. See you on the battlefield!

It was a cool mission, and thanks for the factions lists (units and structures), I already know all the units but some of my friends didnt play much C&C when they were younger (heresy, I know) so they got a bit confused when playing, this may help them a lot.

I've been saying it for months, and you guys finally caved in and buffed those 2 elite units. lol

Maybe I have selective memory, but I can't remember you saying that they're too weak =P

But yeah, we're constantly evaluating the game balance. At this point the balance is already pretty good, so any changes need to be carefully thought through. We were discussing the Cyborg and XO's weakness for a while, and finally decided to buff them.

I said a while back that they needed more fire power or more HP or a little of both. And the reason was because they were easy to kill and almost not worth the price tag. The buff you gave them fixes this issue. :-)

Nice update, but you weakened the Allied even more now by making the medium tanks available only with a tech centre, while the soviets get their heavy tank right with the armory only?

Allies have always required the Tech Center for Medium tanks in DTA's Enhanced mode, ever since 1.12's release almost two years ago. However, to make them worthy of needing a tech center, they're cheap; an Allied Medium tank only cost 700 credits, while being exactly as effective as the GDI Medium tank (which costs 800 credits).

Allies aren't weak even without medium tanks though, they still have fast light tanks which do a great job when micromanaged well. I personally prefer Allies over the Soviets.

I haven't played enhanced mode for quiet a long time, I'm sorry :)
Hm I always felt that balance was WAY off in Red Alert 1. Since the soviets got all the heavy stuff like both big tanks, grenadiers, tesla coils, flamethrower and allies only build the weak units. They're fast, yes, but what does fast bring on, in this game, when you have to defent your base. I never built the light tanks.
This is more a general discussion and not really about your mod, I understand, I just needed to get this out, I'm sorry ^^

Light tanks indeed aren't great defenders, but try attacking with them. On many open maps Light tanks can move past the enemy's base and destroy buildings while the slow Heavy tanks have no hope in catching them. Of course, using fast units effectively requires good micromanagement skills and so Soviet is likely the better side for most players, but if you have those micromanagement skills, you can make your enemy's life complete hell with fast units.

When Light tanks (or Nod bikes) are properly used, Heavy tanks are simply unable to effectively defend their base on most maps, forcing Soviet to build defenses and rocket infantry, which drains resources.

About RA1, I agree that the balance is messed up there, but I'm certain that DTA is better balanced :) We've played hundreds of player vs player matches to verify this.

Another note, the AI has this tendency of building defenses all around its base with the extra money that it gets with cheating, which makes fast units less effective against the AI than they are against human players.

Thank you for your pro tips, I've never seen RA1 this way and now I'm keen to try this out! :D You see how a pro can easily outnumber the arguments of a noob with his knowledge. Thank you for not bashing me and I hope I can learn much more from you :)

Heh, bashing our players is the last thing we'd do. I'm glad to share my knowledge =)

Note however that while DTA is similar to TD and RA, it still isn't exactly the same, so DTA gameplay tips and tactics might not work in TD or RA. DTA is far better balanced than original WW C&Cs at least in Enhanced mode.