Before the close of 2011, The Dark Mod team brings you an enormous update! 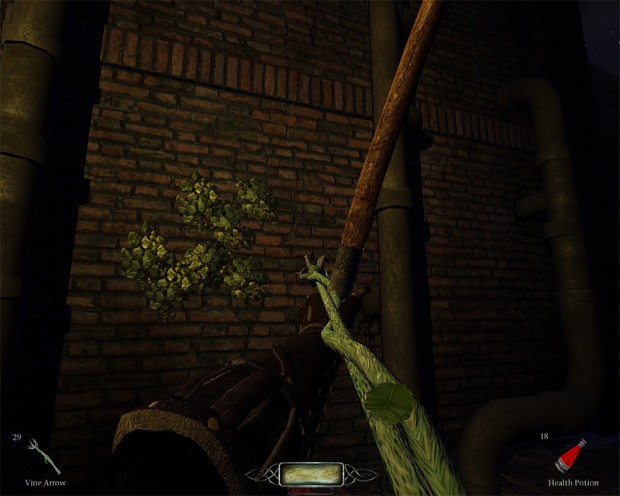 What does that image below mean? It means that significant work has been done to internationalize this mod. There is now a language localization framework which will allow translations to be downloaded separately from the missions and all the GUI, HUD, and Menus have translated versions for many languages (more translators are welcome). Aside from the obvious benefits for our international players, this effort will help bring mappers from other Fan Mission player communities world-wide. Already we are shortly pending the translated release of (marvelous) mission "Crystal Grave" from Polish author ERH+ 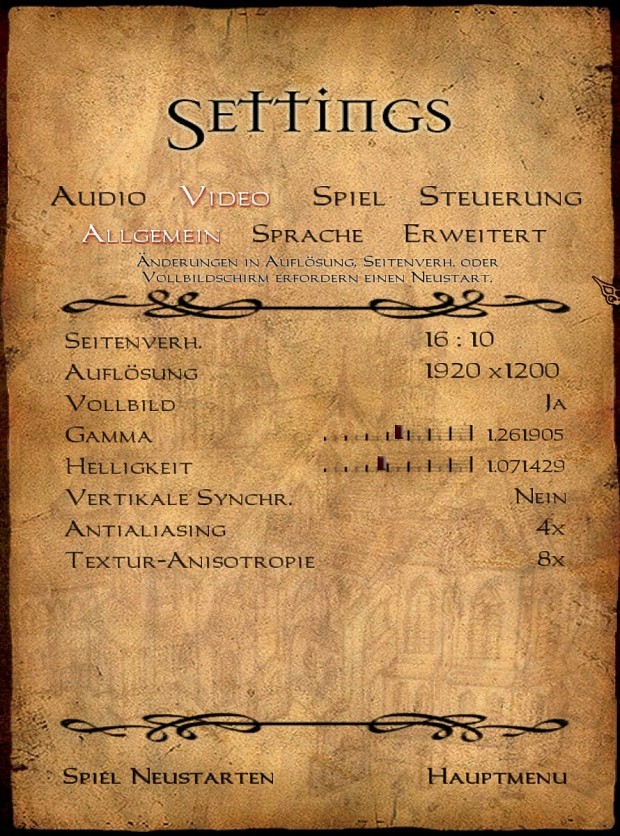 The long awaited arrival of the last "arrow type" is here. Originally planned to be part of the v1.0 release, this feature had been left unfinished due to the lack of team members with the time to complete it. Now mappers can create missions where players with the right ammo can surmount previously unclimbable obstacles. 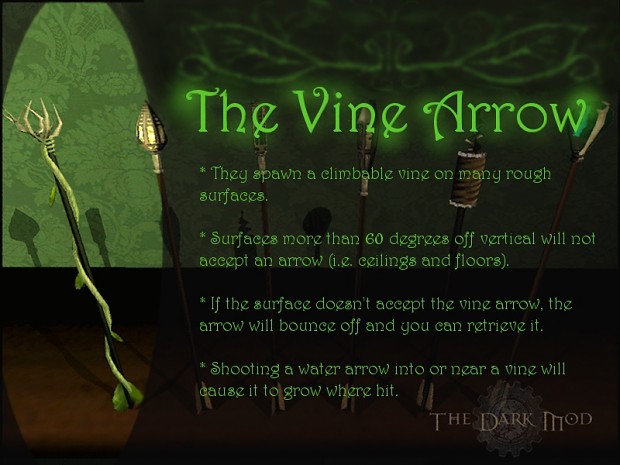 One of the main nit-picks that reviewers have confronted TDM with over the years has been the "clunky combat animation". New combat animations have been authored by animator Noisycricket and results will be much more natural and life-like for players. Along with the new animations, the different melee weapons that AI use will deal different amounts of damage to the player.

Yes, you've read that right... You can now un-lock or trigger Mines using keys or lock-picks. The Mines now have improved detection so AI will no longer be able to walk over them unharmed (as was seen in previous releases).

It’s hard to describe all the ways our AI have become more sophisticated in 1.07, mostly thanks to grayman. AI will now properly notice and comment when suspicious doors are left open. They’ll notice rope arrows left dangling in lit areas, and will come over and look up or down the rope to see if anyone is on it. AI will notice if arrows are left sticking out of things (and will no longer call them “weapons”, or comment casually after getting shot with them). AI will do a better job of warning each other about suspicious events now too... If an AI sees the player but fails to catch him, he’ll warn all his friends that there is a thief in the area. If he sees a dead body, he’ll start warning people about a murderer. This causes the friends to start patrolling with their weapons out, ready for trouble. All the new interactions make the AI seem even more believable and challenging.

Some new textures have been integrated as well as improved with better material characteristics. Many textures which had not yet been compressed to DDS format are now properly compressed thus saving memory and disk space.

The stealth score was improved for v1.04 to be more meaningful to players where a perfect score was changed to "zero" making all alerts additive. The level 5 alert "player seen" was not producing correct results and now this has been fixed in v1.07 to track how long the player is seen and by how many AI the player is seen by.

The v1.06 TDM Launcher appears to be incompatible with the Steam version of Doom 3. A fix has been added to this version so that missions remain installed and game saves will work again.

This release does not include a new Doom 3 executable nor any improvements from the GPL release of the Doom 3 source code. You must install TDM in the same manner as with previous versions. The Dark Mod team will begin the process of integrating the Doom 3 source code shortly but it will take time to fully merge the code bases. The Dark Mod can not be a standalone release until all the Doom 3 art assets and animations have been fully replaced. If you wish to help with that effort, please visit The Dark Mod forums and post in the "I Want to Help" sub-forum.

Yet another large release in 2011! Congratulations to The Dark Mod team!

Nice news, I hope you can optimize this excellent mod, because now it needs a very hard performance.

Already the Quake 1 coding community discovered an optimization that helps make the shadows render 1.5x faster (or better in heavy scenes). With help from the Doom 3 coding community things are likely to improve further from the GPL code changes. With regards The Dark Mod team, they should be able to reduce some of the performance overhead for the light-gem and ambient light system at least.

Incidentally, I found that v1.07 improved the performance for a couple of missions I tried.

I almost despair the opening of the source code because I want to see -- for one of many particular instances -- grayman's campaign begin and I think he may become Michael Corleoned ("Just when I thought he was going to relax a little on the code front they pull him back in!").

About the excellent (again with the "excellent"... oy!) new textures and models:

I wonder if it might be suggested that these "asset" updates can be separated from the "code" updates? So that they might roll out more frequently? Maybe add another level to the version-numbering or something. It just seems -- reading through the official forums (forums.thedarkmod.com) -- that there are plenty of these improvement and additions being "completed" (by Serpentine, Baddcog, Springheel, Melan, Nosslack...) more often. And that these things don't really need to be, for lack of a better and more tactful term, "tied" to code enhancements and tweaks that needs to be thoroughly tested, and thus, understandably, take quite some time to roll out.

I think the philosophy is that each version roll-out is a unified marker for what missions of that version can contain whether it be code features, new textures or new models (etc). This way, instead of saying "To play Alberic's Curse, you need at least TDM version 1.05 and Texture pack 7 and model pack 3". You can instead just refer to what version is needed (though mappers have been pretty lax about including that in the actual mission release...) The weird thing is that a large sub-set of The Dark Mod mapping community are "beta mappers" and thus will usually have early access to new mod assets but there has been no centralized push to get these special members to include new features in their releases and synchronize with mod updates since the v1.0 release. Since I've wrangled mappers into some contests I might be able to orchestrate that kinda coordinated effort? (To be fair, since I've run the last couple of missions, I must take part of the blame for the asynchronous release schedule.)

If you are saying, "Why not release 1.08 with only textures then 1.09 with only models" then I see your POV. I suppose that it comes down to packing more into the releases so they have more perceptual impact. Yet, the version progression still has been pretty subtle with the largest change (from a player POV) happening at v1.03 because of the new rendering options and large influx of textures. If players who haven't played TDM since the Thief's Den demo were to try the current build the drastic improvement would certainly have a larger perceptual impact.

(That said, we are still pending mapper uptake for the use of new mod features from v1.04. Some features will be more popular or easy to use obviously...)

"I listened to a dozen.

[Informs us of more asset updates that will be a great improvement AND hopefully impetus for FM building sparking]:

Grayman has verified his intention to not release the 1st of the William Steele series until 1.08 makes it out.

But to disguise my whinge about that as the only reason I'm here, I will make mention of something else: here at ModDB the TDM "downloads" page is only up to date as of version 1.06.

I am really glad that TDM is doing fine!

The first time I ever heard about this was a short blurb in Atomic Magazine. Print Media WORKS. (Or it would if I could find my copy of Doom 3 before I download this.)

OMG!!! I wasn't expecting this. Thats it screw the rest of my games, I'm going to play this.


This is now being indicated and pointed to by the new article at pcgames.de...

The article is some great publicity! I hope it brings a lot of people to the official site, but if not it'd at least be good to have those that only make it this far to have 1.07 available under "downloads".

Given the current fps drop we are trying to solve after merging the D3 source code, perhaps release will be delayed long enough to try and implement [the fix for the AI being way too quick to go from alerted to ready to kill you] for 1.08. Not a given of course, but the issue with the fps drop has been quite elusive in terms of finding the cause.


This is why the opening of the D3 source code was almost certainly bound to be a double-edged sword...

I almost despair the opening of the source code because I want to see -- for one of many particular instances -- grayman's campaign begin and I think he may become Michael Corleoned ("Just when I thought he was going to relax a little on the code front they pull him back in!").


All the many improvements to the gameplay; grayman's (and who knows which other?) missions being delayed until; all the many assets that have been added and improved upon; all the horizon opening i18n work tels has been up to... dependent on this MAJOR undertaking of merging the D3 source code...

Sometimes I think the future of the mod is more fragile than people realize... The development team keeps getting smaller and smaller. Would the community continue if suddenly there were no more new updates?


The mod hasn't really had much in the way of missions for almost a year now, it seems. The aforementioned grayman mission(s) (and much more, also aforementioned) are delayed until the release of 1.08. 1.08 is inexplicably tied-to/dependent upon the major undertaking of merging the D3 source... Sotha has now stated that his new mission is pending the 1.08... And now this doom and gloom?

But the proposition from Springheel was specifically "what if there is no next release of TDM?"


Oh, well, specifically that would suck.

Because it would mean that 2 of the best fan missions authors' currently completed fan mission builds would not get released because, according to those authors, Grayman and Sotha, they are just waiting on the next release of TDM.