The Commune of Rome

The highly acclaimed Crusader Kings 2 Mod "The Commune of Rome". The Commune of Rome was a republic that rose up in Rome in the mid 12th century. They succeeded in kicking the Pope out of Rome (with the aid of the HRE) and ruled it for several years before it lost the HRE's support, and thus it's existence. But what if it hadn't. In answering that question this mod does more than simply rectify the historical error of not including the Commune (there are rather a lot of errors like that in Italy, but that is a problem for another day). We have created an alternate route to the Roman Empire, but along a historical path.

Add media RSS The return of The Gladiators (view original) 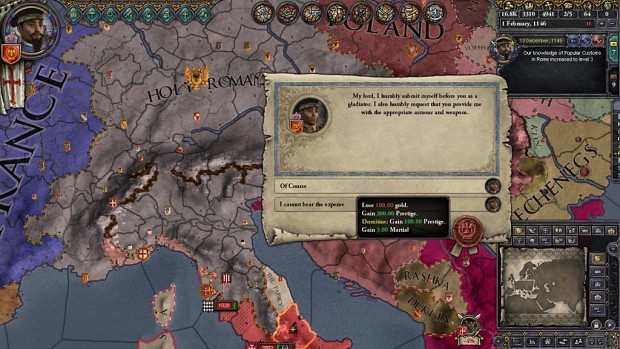 With The Colosseum finally rebuilt the Gladiators battle restart! You could become the Patron of a Ludos and have your team of Gladiators.