I decided I would post an overall completion percentage. I will keep this list updated so that everyone can see the progress. 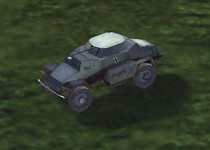 Very fast scout unit with a large vision radius. Best used for scouting and hit and run attacks. The main weapon only does half damage to tanks and structures. 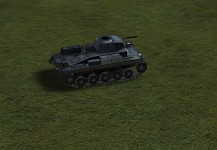 A very lightly armored early tank. It has good speed, but has the same weapon as the SdKfz.222 with about double the armor. 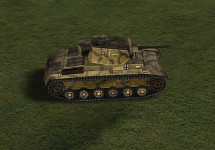 The main tank of the early German army. It is one of the best tanks in the early part of the war. It's main armament is deadly to lightly armored units and will do damage to tanks. 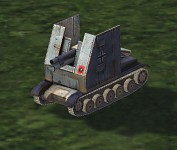 This early self-propelled artillery needs to be well defended as it is very lightly armored. The 15 cm cannon will do quite a bit of damage over a long range, but it suffers from a very low rate of fire.

The Panzer IV was the workhorse of the Germans during World War II. Fighting in every campaign of the war. This well armored tank will easily destroy all Tier 1 units with one shot, while taking little damage. They will remain competitive into the late part of the game balancing cost, firepower and armor. 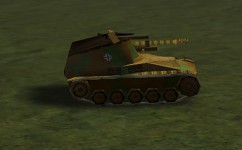 The Wespe SP Artillery is a very effective artillery that will remain the main artillery weapon throughout the game. It does the same damage as the Bison, but has twice the rate of fire with a longer range. 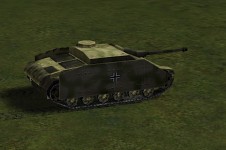 One of the most effective armored units built by the Germans throughout the war. The StuG III has the same firepower and armor as the Panzer IV at half the cost. The only drawback is that the gun is not turreted so it does not fire on the move well. 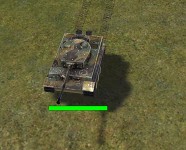 The fearsome Tiger tank features the best armor and gun of any Tier 2 unit. The 88 mm cannon provides firepower that will destroy all but the heaviest armored units with two shots. The biggest drawback is the huge cost and build time. 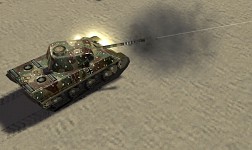 Widely considered the best tank the Germans built during the war. The Panther combines good speed and maneuverability with great firepower and armor. The primary weapon is more powerful than the Tiger's 88 mm because of it's higher muzzle velocity. 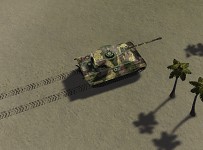 The King Tiger was the apex of German heavy tank design. It is better armored and has a better weapon than the Tiger. The 88 mm cannon will destroy every Tier 1 and Tier 2 unit, except the Tiger, with one shot. Most other units will not stand up to more than two shots. 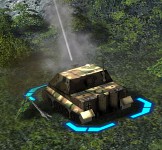 The Sturmtiger is a deadly Tier 3 Artillery unit. It's 380 mm shell does twice as much damage as the King Tiger's gun, but it fires inaccurately and very slowly at about one shot every 90 seconds. The Sturmtiger is best used to destroy the most heavily armored structures. 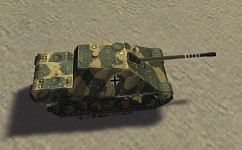 The Jagdpanther features better armor than the Panther and uses the same weapon as the King Tiger. For the cost, it is the best tank killing weapon in the game.

For mobile air defense, the Wirbelwind is the answer. The quad mounted flak guns provide a deadly deterrent to air strikes on your units and will shred even the most determined infantry attacks. 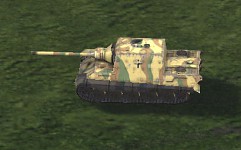 The Jagdtiger is a very heavily armed tank killing machine. The deadly 128 mm cannon will destroy almost every tank with one shot. The Jagdtiger does come with some drawbacks as it is very expensive, slow moving and it does not have a turret.

The initial plan right now is to get the air and land units for the Germans and USA done first and then decide on whether to add naval units or to add...

I am currently looking for help with scripting, textures and modeling. Let me know if you are interested!

Here are all of the finished units for the WWII Mod. Make sure that you only play as the UEF and play against the UEF.

Would love to see this mod continue in Forged Alliance Forever!

And how long this mod done (this mod so cool)

This can use in Supreme commander Forget Alliance ?

Right, except America was fighting a war on two fronts and were nearly alone in the Pacific. That, and I would ask any Polish citizen or other victim nation of the USSR you're praising and ask them what the occupation of their country after the war was like. I'm sure you won't get much positive feedback. So no, the USSR didn't save countries like Poland, they took it from one tyrannical regime and gripped it with their own while forcing their communism and other forms of oppression on those countries.

Next time you will make mod on WWII, don't forget about 27.000.000 dead Russians who won the Great War trully (and not let Nazis reduce England to ashes>follow their march to your grandmother's home, Anon).

America vs Evil Nazis looks badly, especially if consider what americans faced there, even in weakened form.

Check historical records and find out who had exhausted Nazis resources in Europe before Americans arrived in 44.
By the way, it was Stalin who urged Yankees to strike before the very end of war. Of course, as you know, Yankees are not doing anything for thanks. The USSR agreed to strike Japan 3 months after the end of Germany.

So, I must conclude that YOU have rather poor history knowledge, so you just believe everything from TV, or... You just a thankless moron, simply incapable of realizing that every good think you've got now on its place only because of this unbelievable sacrifice.

Of course, politics now tell you that Nazis weren't that bad and the USSR was the true evil. Just keep in mind that Nazis (not Soviets) took Poland, Belarus, Ukraine, France etc and started Full Scale genocidal campaign, called Holocaust. Do you really believe some operations in African desert and in Italy might be enough to stop technically superior Europe rulers? Without eastern front the UK sea barrier is nothing but temporal inconvenience.
Then you must be retarded far far below the level any form of kindness and respect to the Fallen.

Or you know, Russia got all its tech and resources from lend lease and the other million loop holes at the time from the US. Plus the British Arctic Convoys but hey whatev's. at the end of the day Russia's still a country full of retards.

Really? Then, I'd like you to explain me in what reality Ural mines and Siberian factories and Moscow combinates are American. Also, I'd like you to show me some data on American constructors of winning IL-2, Yak series, T-34, IS-series, A-cannons series and famed Katushas.
Do you still think they've used all shining american tech? Do you realize it's not just improbable, but impossible? Or your atrophied brain just can't understand how badly those people needed repairable and combat ready vehicles on the frontlines, while Lend lease support was still unpacked? Or how badly a country like USSR needs their own modern weaponry and army?
Soviets have spent much of their gold reserves to buy vehicles to fight in war, which was noting but danger to us all.
World people should be tankful to soviet and other heroes for their sacrifice. I don't say Stalin, but Zhukov and Vasilevskiy and their soldiers.

Lend lease was 1/3 of all soviet vehicles. And those Cobras and Trucks didn't win nor Stalingrad or Kursk or Voronezh or else, and surely they have no relation to Berlin operation.

British Arctic convoys were not enough to fight Nazis.

At the end of the day Russia fights fraking terrorists in Syria, their MoD gives full data on those operations to all world Media and News channels. Yes, Putin is not an Angel, but on his place... noone could be an Angel.

If not Russians, well... Rememer that episode of ST: Enterprise, where Nazis have taken the White House.

If my arguments are not convincing to you, then you must be lost to history science completely, fellow worker.

One third of all soviet vehicles is still a **** ton of vehicles. Also the US and Britain were a major source of raw materials for the Soviet war effort. The Soviet Union had no native sources for Rubber, a critical war resource. The US and Britain also supplied the Soviets with refined petroleum products, food, raw materials such as steel, cobalt, and tungsten and much more. World War Two was not won by any single nation but by a coalition of more than 40.

Either way, Without Russia, we couldn't have won,as they stopped alot of the German experimental tank projects