RSS Happy Easter and the next update!

This news reveals the new project name and the third playable race!

first of all, we wish you a happy Easter!!
Today, we will reveal the name of our new project and the third playable race! Beyond that, you will get some more screenshots and further information.

According to that our new splash screen 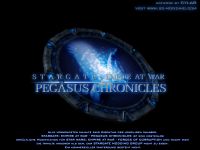 The name implies it already, so here the official announcement of the third playable race, the

But why the Wraith? That's actually quite simple! On one side, similar to the Goauld, they are the main enemy of the show Stargate Atlantis, furthermore they give us the possibility to create galactic conquests in the Pegasus galaxy, in which you can play through the story line of Atlantis and thanks to FoC, only with Wraith against Tauri! Last but not least, the whole team loves the Wraith and with their organic ships and structures, they are a nice contrast to the other two races! The Wraith will replace the Empire, the Tauri the Consortium and Anubis (yes, not the Gouald!^^) therefore the Rebels. As an appetiser, here the new Wraith scout, a fast unit to explore planets with camouflaging attributes: 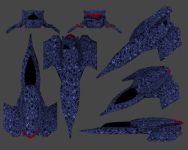 Please ignore the black dot on the bottom side!;-) You know already the Ori ship yard, slowly but surely it gets a texture (still WIP) 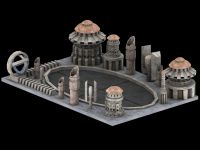 Not only the artists have been diligent, our coder and level designer too! Hugussi has created a new Systemlord Alliance GC map. 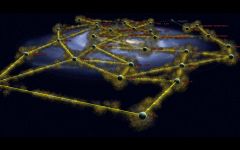 It is again about the war with the Systemlords. But this time the right way! Beside this already well elaborated GC map, we have already detailed scripts about the story (events) and first implementations, this time even for the Goauld! For the new mod, we will finish one GC map completely first, before we start working on the next one. In this way we can guarantee, that no half-done or boring GC maps will be in the final mod.

Klon has been busy too and finished another one of his maps, which shall replace the original EaW ones, this time a city planet: 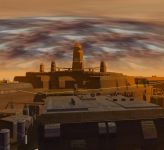 Last but not least, according to the design of the fighter, a new conzept of the Aschen battle ship: 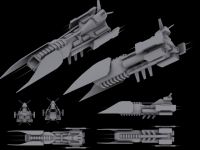 Which design we will take for the mod is still not decided yet!

Unfortunately i have to deliver you a sad message, our longstanding Co-Lead and Skinner Larkis has to leave us because of private reasons! He will still be active in the forums and supervise the developement of the community mod. We wish you good luck for the future! Klon, our Lead Level Designer will now be our new Co-Lead, congratulations!

That's it for this time, the SGMG wishes a lot of fun, we see us in the forums!

coming along nicely it seems,good to see :)

hey that sounds aswome srry to here the co leader leaving but good luck with klon being the new one and just got to say one thing go wraith + merlin to be honest im thinking that the team took a vote on which race to go with lol and if your not sure witch ship to go with why not put up a poll for the public to choose like just try it with one design see where it leads lol well good luck cant wait also will those skirmish modes still be left in the ancients v wraith and tauri v wraith?

Yes and no, for the release, we haven't planned these maps, cause they would take too much time. But we will add some via an update or addon klater on, like new GC maps.
Concerning the poll, actually a good idea, maybe we will start some polls about some ships later.

I hope I have a gread time with you guys

Those maps will not be included anymore, at least not in the first release!

Im glad to see the wraith made it in as the 3rd race. I was thinking you remember the wraith transport type ship that Todd had in the hanger of the deadulus? It would work great for a wraith anti fight corevette like the replicators have. It would free up the wraith cruiser to be more of a 1vs1 lvl with a reg bc304.

And allow the wraith hives to be more on par with the 304mk2 / hero units. Hopefully the zpm powered hive will have a long cooldown on its barrage ability if it is gonna be the same as the EaW version. There is also a wraith resupply ship that was shown in the early part of atlantis but youd prolly have to completely make the design yourself as it was only wreckage in the show. But it is another ship the wraith could use.

Nothing of the old balancing will be in the FoC version anymore! The super hive won't have a barrage ability anymore, the cruiser be a counterpart to the Hatak and BC-304 and so on. This transport wil be the transport, so no chance to make it a corvette. Of course we will invent a lot of ships. Btw, BC-304MK2 will also not be anymore in the mod!

:D why do u guys think i made some many, test/experimental, wraith ships in my patch, i thought to myself, if they will be Race 3 how can i expand there fleet, problem was i was limited to only a hand full of models for the wraith so i had to limit wha i had lol, but yeh, most could be improved and modified to work better, after all they were only experimental ships lol

i like your patch spino, i hope the 304s get the missle barrage that the curruption ships had in the orginal FoC. Would make better use of their missle tubes in my opinion. And hopefully you can get a few more new wraith ship models, even if they are totally fan made.

well im outa it now, ive pulled out from working on te MOD all together, im still ok with answering questions and such but yeh, as far as the mods concerned they are on there own lol

No offense, why want you to have Wraith ships from Spino? All he did was changing the codes a bit. Even i could make a weaker Hive that spawns more Darts and call it "Carrier", lol!
Should be obvious that i will make a lot of new Wraith models...
Asho, why don't you start a Spinobreaker fan club, lol!

well to be honest, that is all i did yes, only because i was limited in models, my original carrier style hive idea was a shorter hive, but 2 times the cruiser without the hollow middle bit, and with 6 hangers and stuff like that, but modeling isn't my big thing, all i wanted to do was put the thoughts out there, figured if merlin liked the idea hed run with it if not then i will just drop it, and so i ask u 2 do the same asho, drop it lol, it wont happen

Only thing i wanted to say is, that modelling a new ship and coding a new ship are two completely different things, so Asho should aks me if he wants to have a new Wraith ship model, never mind!^^

merlin, can we have a new wraith ship model? lol @:) elvis lol

Cause the word "Goauld" actually describes the whole "eel" race, means literally every system lord respectively every person with a symbiont, that is evil.^^
But in this mod, you play only ONE of them, and this is Anubis, that's why we call the second faction now "Anubis", respectively "Anubis' Empire".
One more reason, you fight other system lords (respectively Goauld) as Anubis too, so it fits better, if it is just Anubis. Lol, long explanation, but it should be clear now!^^

i really like what you have done with the mods, but i still think the bc304mk2 should stay in the FOC mod, because it is the best ship the tauri have and without it i think playing them will be slightly boring, unless there are other ships instead of the bc304 you ca have as the tauri, such as the ancient ships