Add media RSS In the Dark of the Night (view original) 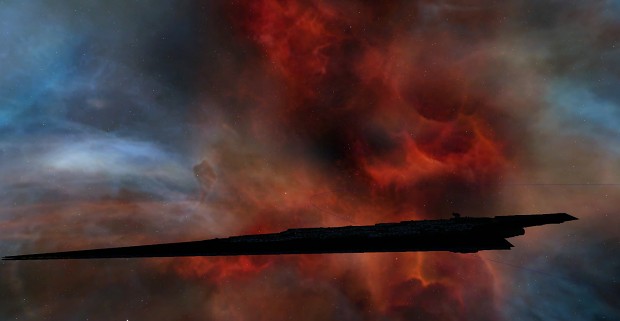 A cloaking Executor, thats what i call "the ultimate power in the universe! I suggest we treat it as such...."

This is by far my favorite mod, not only because of your genius ideas in the realm of gameplay, but because of the way you incorporate the EU lore into it so seamlessly. Keep up the great work Goa and crew!

The ship before you is the Night Hammer, the first model I've ever entirely retextured myself and the last new model that will be included in the next update. A jet black Executor Super Star Destroyer that's equipped with experimental stealth armor, the Night Hammer has a very different history in Interregnum (chief among them, it is never renamed by Admiral Daala to Knight Hammer, the more commonly used name for the ship.)

As in the standard Star Wars canon, the Night Hammer was the idea of "Superior General" Sander Delvardus. However, instead of constructing it in the deep core, in Interregnum Delvardus was sent to repair his forces at the shipyards of Bilbringi after the Battle of Eriadu. He then became one of the dozens of minor Imperial Warlords, and devoted all the resources he could spare into the construction of the ship.

A few years later, Grand Admiral Thrawn gained the blessing of Darth Vader to retake the shipyard, as it bordered Thrawn's own forces at the gate of the Unknown Regions. While Delvardus' forces were easily defeated and the General was unceremoniously executed, Thrawn also recovered the half completed vessel and continued developing it under his own specifications. Having already acquired the prototype cloaking device from the Emperor's storehouse at Wayland as well as some of the schematics to an earlier cloak equipped Star Destroyer, the Terror, Thrawn was able to equip the Night Hammer with its own cloaking device. With its massive firepower, ability to be undetected by long range sensors and tactical cloaking capabilities, the Night Hammer could be an unstoppable weapon in the hands of a military genius like Thrawn.