"Best Star Trek Mod for any game period."
Mod of the Year 2014 I Player's Choice
RSS Ages Of The Federation: Weekly Dev Diary #2!

We're back again with another developer diary. We'll be delving into the last week's changes and updates below!

Development with the Dev's: Live!

Every Wednesday at somewhere between 7.30 and 8PM UK time (use google to work out the time where you are) we'll be running a live stream on my YouTube channel and via Twitch! Feel free to subscribe and follow using the links below:

Check out the latest video with our live devblog. Hobbs and Maxloef join the Gul in showing off the lovely stuff.

This Week In Development!

The last week has primarily been focused on refinement of existing items and the addition on flavour to the mod, both visually and functionally. One or two of you mentioned that you'd like to have a more in depth blog describing some of the work, rather than a bullet pointed description of the work completed so I'll go into a little more detail with this one! Let's get started.

Set Your Course By The Stars, Not By The Lights Of Each Passing Ship

One of the things that we really wanted to achieve for Ages Of The Federation is to make sure that nothing was overlooked when it comes to adding our own flair. In Star Trek Armada 3, we felt that we did a decent job by and large, but there were always some parts of the mod that we didn't concentrate on as much. The Stars themselves are one of these things. This week, Max created and added two new star types for us. 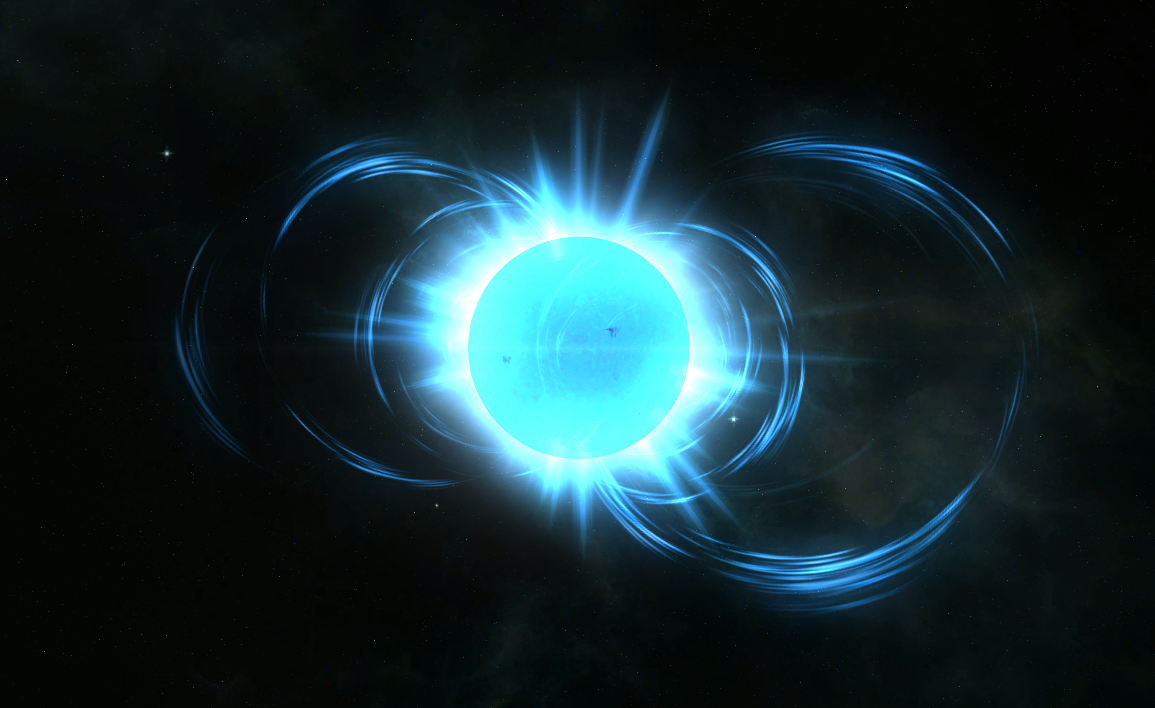 The Magnetar, as you see above, is a dense star that features intense gravitational eddies and a remarkably strong magnetic field. As a result, its coronal mass ejections travel in a much wider and more pronounced arc than on most stars. It's a beautiful, but violent star. Don't keep your fleet close to it for too long as the magnetic fields around the star can impact your systems. 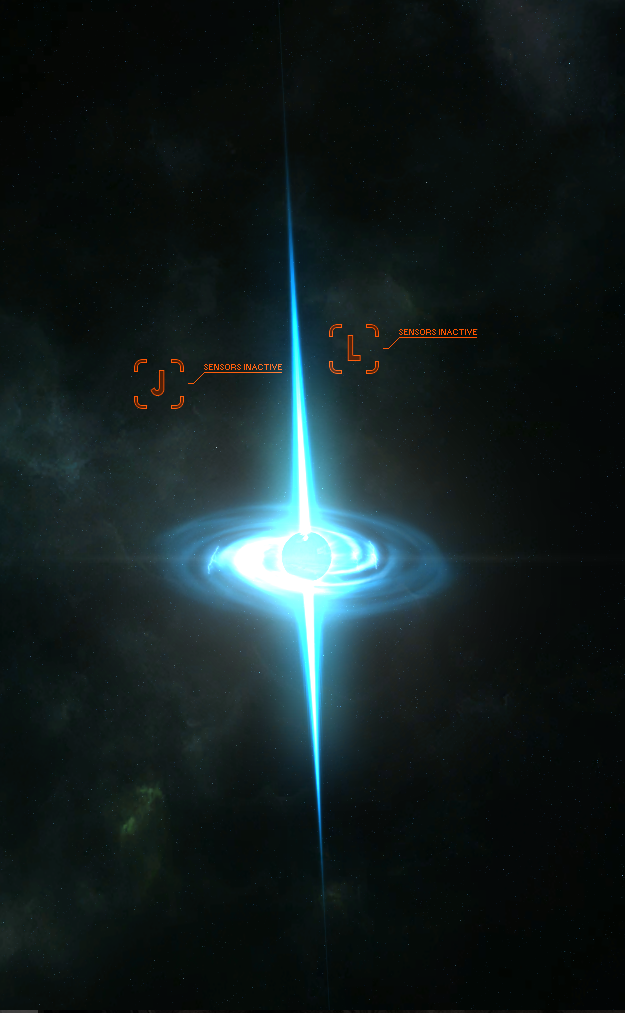 Another absolute beauty is the Pulsar. Max took a little artistic licence with this one as we don't have any evidence that there would be a swirling field of ejecta around a pulsar, but I hope you'll agree that this is a stunning addition to the skies above any world. We haven't agreed upon the affect that this star will have on your fleet quite yet (as we haven't got around to discussing it) but I'm tempted to have it help in replenishing your antimatter reserves. We shall see! 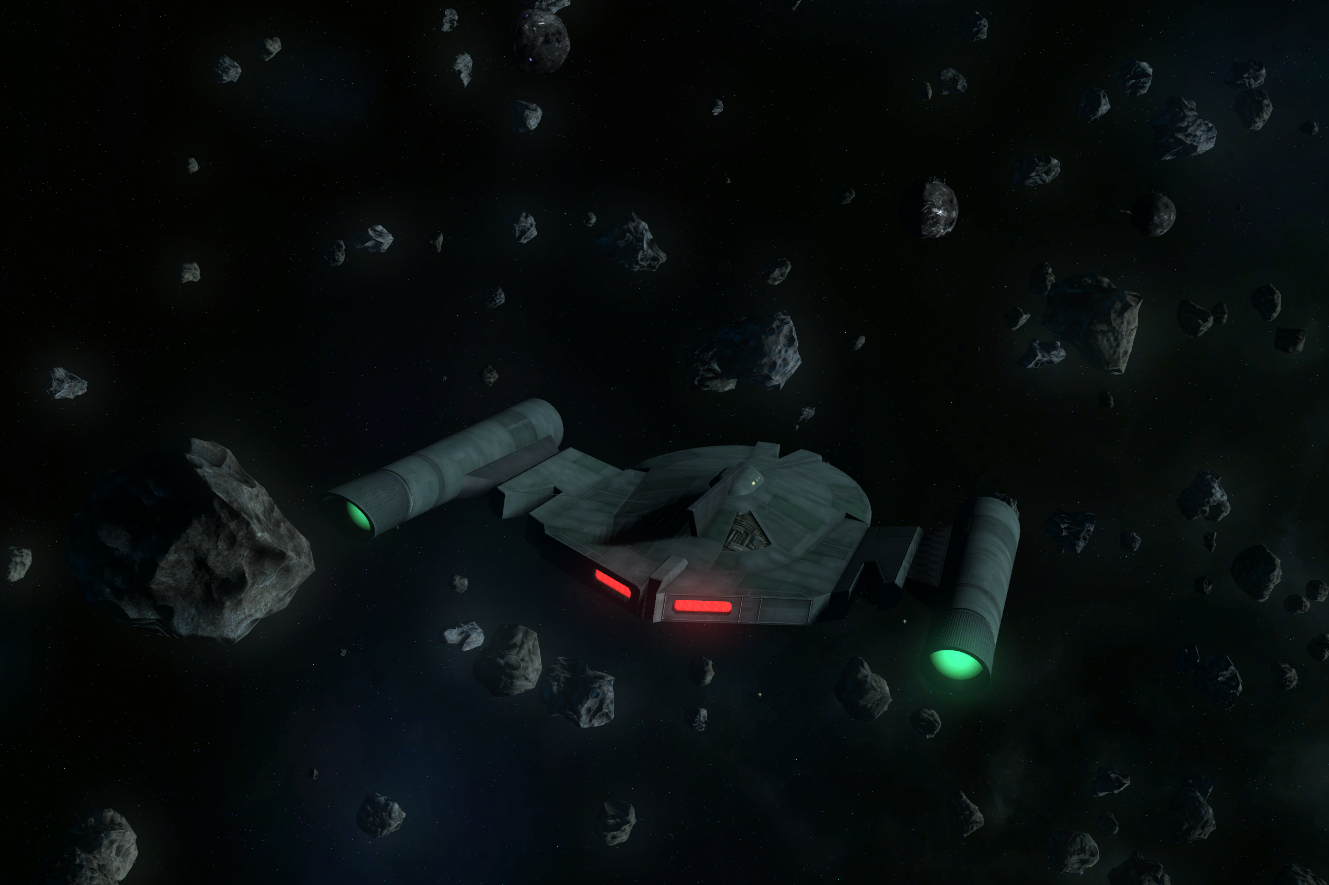 In addition to the stars themselves, we've introduced a new set of asteroid models to the game. One of their usages is in an unstable asteroid field as seen above. These fields are a nightmare for your larger vessels as the deflectors can't fully defeat the sheer number of impacts, given the limited maneuverability of your Capital vessels. They'll take more and more damage, the longer they reside in one of these fields. Your Frigates and Cruisers, however, are nimble enough to avoid any damage through expert piloting coupled with their deflectors.

We wanted to introduce a tactical element to different gravity wells and felt that wells of this nature would be useful. You may wish to park a fleet of smaller vessels in one of these wells to head off an enemy invasion fleet comprising of Capital ships. If you can hold them in the sector, your Frigates and Cruisers gain a distinct advantage in the fight, freeing up your Capital ships for the fight elsewhere!

Hobbs has been hard at work this week improving on the game setup menus and giving them the glorious flair that he brought to the main menu!

What's in a flag? Some might say everything! It's our rallying call, our identity, an indicator of all we wish to protect and defend. I'm sure many of you look upon the flag of your home nation and feel that your values are mirrored in your flag. Hobbs has worked hard to get 50 Trek flags or emblems into the game. He's also tweaked the colour palette a little bit to make sure it's as Trek as we can get it. I'm really impressed with the work and can't wait to choose a flag that will fit my playstyle in-game! 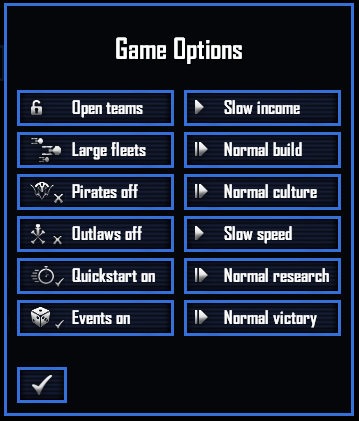 Hobbs has also taken the opportunity to complete the Game Options and Victory Options sub-menu's in order to ensure that they match up with the others we have in place. Above is the Game Options Menu. It's clean, clear and crisp. I love this aesthetic and I'm so glad it wasn't left to an amateur like me!

Why yes, Chang. You have a symbol above your ship denoting its class! This week I've rationalized my in-game menu to the other races rather than just the Federation and have also worked on implementing in-game ship symbols. 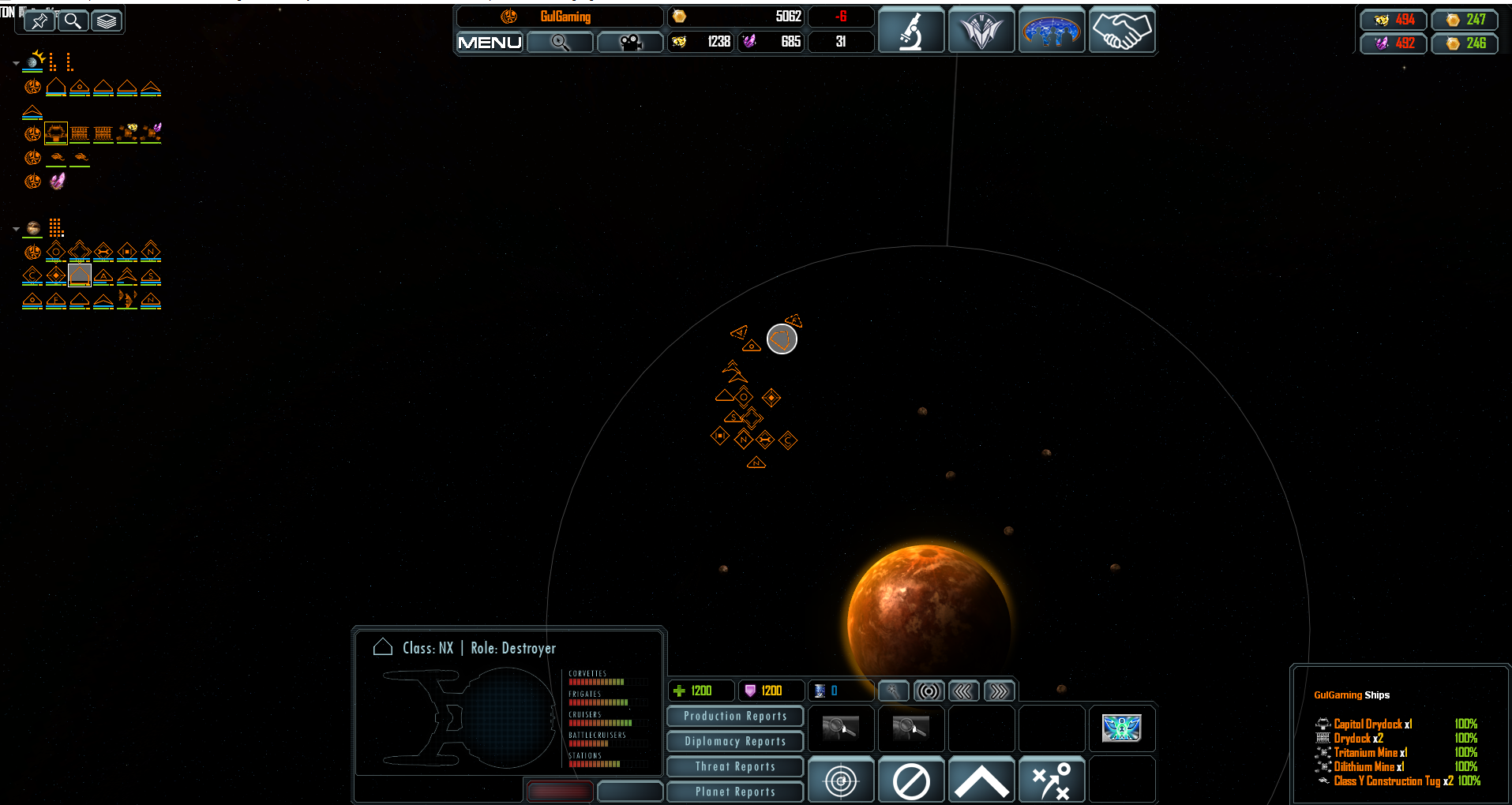 A quick look at the above shows some of the symbols we're using for different classes of ship, both on the in-system readout and via the empire window at the top left. Each different ship class has its own unique symbol (this will be common to all races, so you'll know the type of ship you're up against at a glance). After a lot of discussion on the symbology we wanted to use in AOTF, we were broadly in favour of using "NATO" style symbols to denote ship classes, but wanted a clearer, more identifiable system than STA3 used. That's why each class has its own symbol now, as opposed to a broad size descriptor. Hope you like the look of the symbols we've shown off! Let us know what you think

You're Presiding Over a Massacre

Ah V'las. What a lovely fellow! We desperately wanted to ensure that Vulcan vessels were well used in Ages Of The Federation. This week we made the choice to have some Vulcan neutral vessels as militia around worlds. As the Vulcans were widely regarded as either neutral, or indeed friendly to the Federation, it wouldn't have stood to reason for them to be fired upon with no reason. V'las to the rescue! After his outing as an agent for the Romulan Star Empire, V'las escaped the Vulcan High Command with a number of ships containing the loyalists of his doctrine. These wayward Vulcans were not accepted by Romulus and couldn't return to Vulcan. The Loyalists have set up outposts on far flung worlds. Your fleet might encounter the remnants of V'las' loyalists our there. you know what to do! 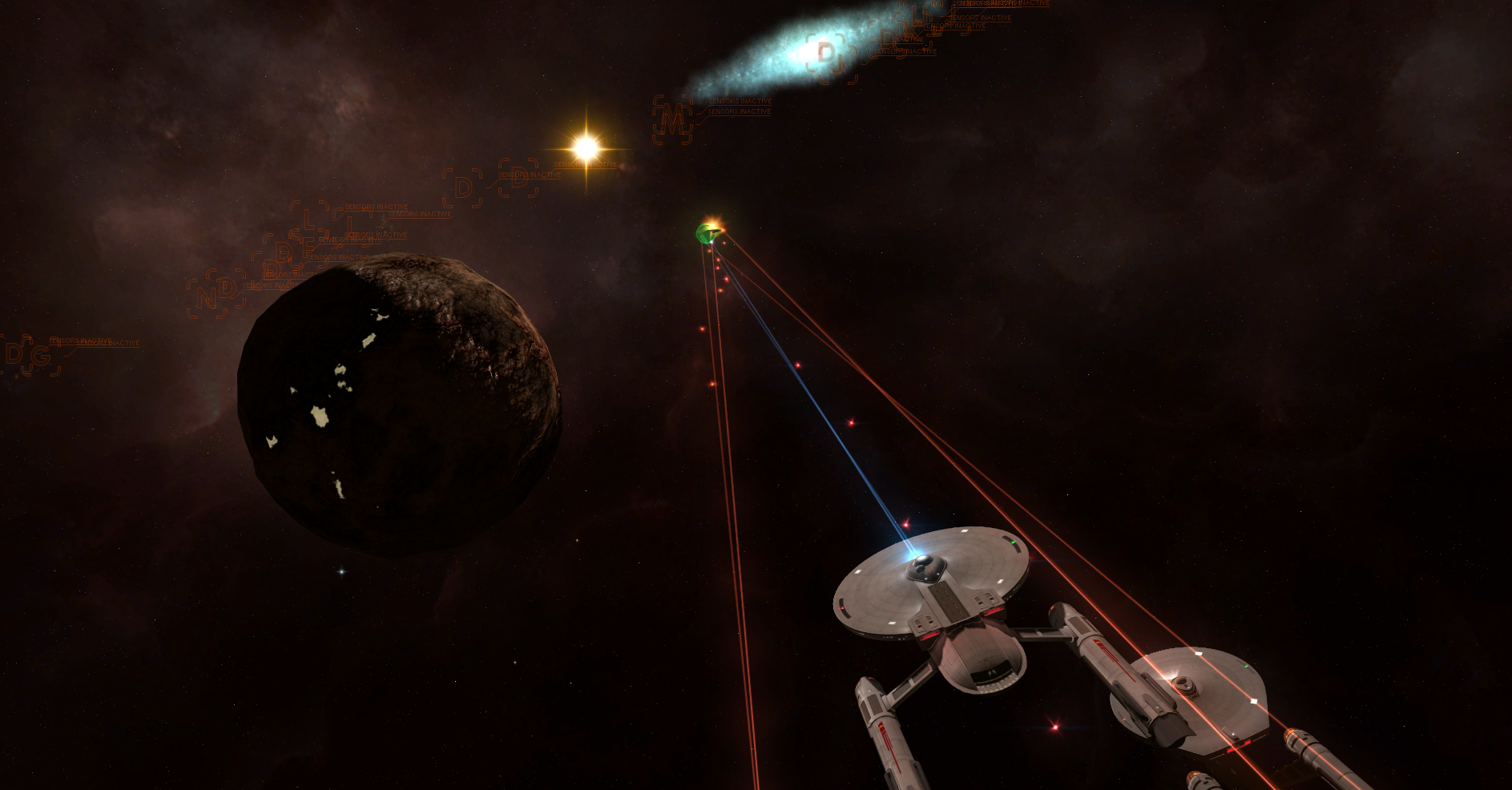 That's it for this weeks development. Hope you've enjoyed this little news piece and come back for more next week! Make sure that you subscribe to Gul's channels for weekly live development content!

It's great you're being so open about the dev process. I have two questions.

You've said before you're thinking of making the upper limit for ships to be about 50. I take this will apply to the large fleet size option. How many will normal and small be allowed to have?

I have a metallic hardon for the Asia class... How powerful will it be compared to the Ares and D6 when fully upgraded?

Hi legion, the ship limit hasnt been set in stone so i cannot really answer that question. As for the Asia, while not having as much firepower as a D6 or Ares the Asia is designed to act more like a tank. So she'll be able to take a lot of hits.

Gorgeous! Really like to read about development, it's good that you are clear and open for fans

I have a questions, though it's quite early for it:

Do you plan to add some historical heroes for factions? As we know, this timeline doesn't appear on TV, but there was books, comic and some lore information.
Maybe you have a rights to add some fanmade-Axanar heroes?

Any plans for events? Events was a so nice and challenging part for me in STA3. This is not so covered timeline, can ve expect something lore-friendly, but previously unseen?

I'm not sure if this question has been answered before but are federation players going to have access to vulcan and/or andorian ships? Or will they be potentially capturable neutral ships guarding gravity wells?