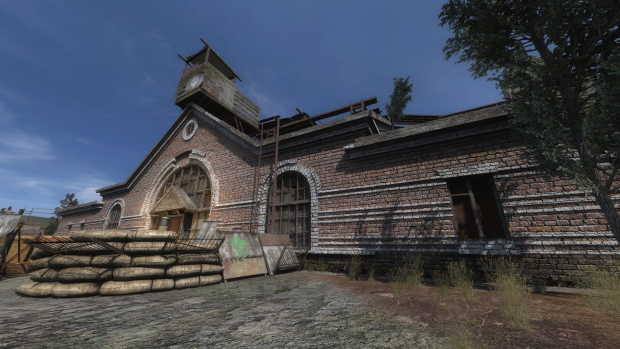 Hopefully you've enjoyed the dev streams this week, I'm going to try and continue to do them more often!

Next up is to work on Yanov's new exterior, to bring it up to the level of the new interior for the Skadovsk. If you're interested in following the dev streams, feel free to follow me on www.twitch.tv/beacondev

is on the other side of the barricade a dolg/duty spray?

*and does the duty side also looks more organized/perfect (the barricade/how it is built/less improvised)?

Great questions, yes the other side of the station is the Duty barricade and has Duty markings, it's differently laid out but not strictly more organised.

This is great, just what it needs. I often felt Yanov wasn't properly done and thought about how I would make it look more fortified. What about Skadovsk? I'd add some sandbags on sides of the ships and as reinforcement on the bridge, rusty sheet metal doesn't provide much protection... Reinforcing nearby outposts would be cool too, the one near docks is a strategic position, it's foolish not to use it as such.
I liked how devs made Loners camp in Clear Sky Cordon, thats the way camps in CoP should be done.

We've already given the Skadovsk the same treatment - you can see the main entrance barricades here Moddb.com ; and there are also a few shacks on the deck for the patrolling guards.

We really liked the CS Loner base, and it was a big inspiration for how we've laid out Yanov and the Freedom base at the Sawmill in Zaton.

Actually metro games felt horribly unbelievable in their stations (awefully static and just not believable at all). This one here though looks like a good addition. The station there felt always kinda unprotected and easy to stroll in yet you never found any mutants getting near it. That said this map needs a lot of work. It's balancing is quite aweful and it feels really weird.

But do you still have large gaps in the windows etc, for that freshly irradiated breeze to pass through?

Will be quite a change, to have a more serious STALKER world, instead of the half-campy vanilla game where men happily let some rusted sheet metal stand between them and horrible mutants.

its looking great so far mate

i don't know if your going to do this but will you be placing ladders on the towers and buildings that have broken ones ?

i personally think it would add to the game to be able to actually use them as lookout/sniping positions, but i do understand if this is something you do not wish to do

We are trying to increase the verticality in all the levels, yes. Previously inaccessible rooftops and high points will be, in some cases, accessible now :)

Level designers rarely take advantage of vertical plane; This is something that always baffled me in many open-world games

Sadly, it's difficult to get Stalker AI to act properly when inside a building and they will stare at the floor or ceiling.

One thing that bothered me a lot in the game was that you could take shelter from blowouts in place that had perfectly clear opening to the outside, like window frames without glass (not that glass should contain a blowout outside). The old barge is a good example of such unbelievable shelter with its holes everywhere, you'd think they'd be closed with metal plates or something.

If you've been watching any of the development streams I've been doing in the last week, you'll know I've been working on the new exterior for Yanov station.

One of our goals in Wormwood is to make Stalker camps feel much more like actual lived-in, believable places - the Metro game series did this excellently.

Yanov's new exterior makes it seem like an actual fortified, defensible position deep in the heart of the Zone.
Loner lookouts patrol the roof while Freedom and Duty each hold a barricade at the front and back of the station.
The side entrances are fortified and barred against entry, funneling any potential attackers towards the much more defensible front and back.