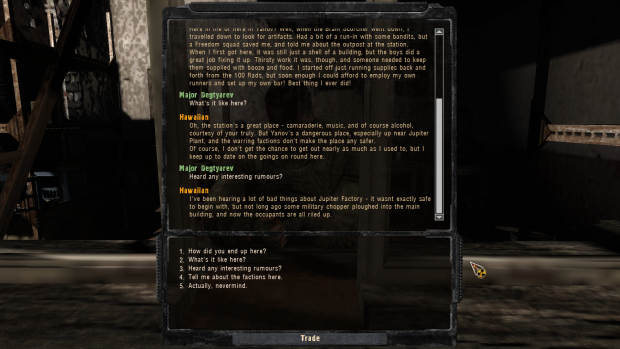 Obviously, any feedback, suggestions, or picking up on my grammar/tone/spelling mistakes is much appreciated!

I'll check on the mod board when I get a chance, though my grammar isn't the best. I guess we can get away with that by reminding ourselves that most of the characters in COP are European.

No worries, it was more of a joke then to be taken seriously, as one of the other comments stated I believe the name was intended to be comedic more then anything else. Looking forward to playing your mod! :)

No way, English Hawaiin is the best part of CoP.

But all the extra dialogue is appreciated.

I actually love the english dialogue of S.T.A.L.K.E.R. thank you very much, Hawaiian is just, how shall we say... the comedic one of the bunch. :P

A quest where he says, "STALKA, let the cheeki hit the zone!" and than he gives you an Exo suit, an RPG and 50 warheads. Heaven :3

That's okay, we got medics onboard :D

Noticed it says "your truly" instead of "yours truly", may want to look at that.

More character development is awesome, characters in vanilla are rather boring. I hope some of the quests you're giving them are repeatable as well.

Good idea! I love things like that may come from my rpg gamer (pen&paper) heart^^
Gives a lot of atmosphere.

He sounds a bit too verbose and intelligent to be our Hawaiian, needs to be more laid back! Half the fun of well written dialogue for colourful characters we often find in the zone should be trying to work out what is rumor, legend or truth.

Since Beacon's away, have a completely non-sexy screenshot of some of the dialogue changes I've been making.

One of the annoying things about Hawaiian (apart from his voice acting and general attitude) is that GSC did very little to develop him as a character or a barman, compared to any of the other traders in the game.

Dialogue option by dialogue option I'm working to fix that, giving him a bit of history and a "What's New in the Zone"-style set of rumours that can give useful hints to existing and entirely new missions, stashes, secrets, and so on.

Hawaiian will also be cutting back on weapon sales - he is, after all, a barman - but fear not, a new trader will step up to fill the void.

Lastly, I've got some missions planned for Hawaiian (he didn't get any in vanilla), which I'll be teasing at just as soon as I can work out how to get them in-game.