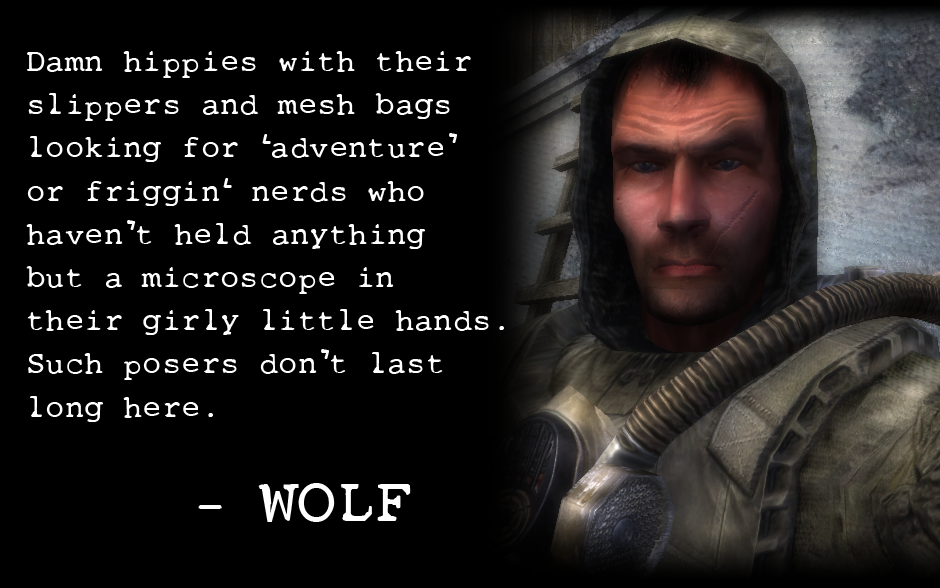 It is my sad duty to inform you, our loyal and dedicated supporters/fans, that development on STALKER: Way of the Wolf is hereby postponed indefinitely.

Due to the inability of our modeler, Joshy, to produce and modify content for the mod thanks to the badly-written and now completely unstable X-Ray Engine modeling plugins, we are unable to continue work on making the mod we the team, and you the people, want. Without modifying existing, and creating new level geometry, the mod would be a hollow shell of what it deserves to be. Because of this, we have decided to discontinue work on the mod.

I know this will come as a shock and a deep disappointment to everyone. Believe me when I say that this is not what we wanted to happen. So much work has been put into the mod so far and it's truly heartbreaking to have to abandon what has become our baby. However disappointed you are, trust that we feel ten times worse, for the disappointment we've caused you, and ourselves.

All is not necessarily lost however - developing Way of the Wolf has been exceedingly educational for me especially, in the use of the SDK/Level Editor and in general modding knowledge. I'm happy to announce that the team will be moving our attentions to a project close to my heart - the creation of Call of Pripyat: Redux v2.0.

Redux v2.0 is going to be bigger and better than ever before. I won't go into specifics in this news post (check out the Redux ModDB Page) but suffice it to say that everything you wanted v1.0 to be will make the cut for v2.0 (stashes + upgrades especially) plus a hell of a lot more. We ask that you stick around and support us in this endeavour as much as you have for WotW.

Once again, we apologize, and thank you for your never-ending support and dedication to the mod. You guys are really amazing.

- Beacon and the WotW Dev Team

In this update, we have big news regarding the WotW Dev Team and we celebrate the success of our community activity!

The fourth WotW status update - this time; development resumes, the problem of bandits is studied, our first Interview is conducted and our Facebook page...

A little news post on the immediate future! Exams are looming, so updates are going to be slow until the end of June!

The third WotW Status Update, featuring recent mod progress, opening of the official forums and the reveal of a new faction!

lol, failure of a dev team

Hey folks! I'm noticing a lot of new Likes on the Facebook page - the mod is not in development, but you can follow our work on the most exciting Call of Pripyat mod to date, here! Moddb.com

Crap. First this and now S.T.A.L.K.E.R. 2 also 'postponed indefinitely'.
:(
The only hope is the Dezowave team, they can, and maybe will modify SMRTER with Wolf storyline, if we're lucky.

Dang, I would have loved to see a total conversion for STALKER.Because-I don't know about you-I'm really getting tired of all these that do nothing but "improve" the original game.

I hoppe that the storyline is more interesting,to come out and bowled over
the peopel they to disbelieve that your it don't handle the Releas.

Single Player
Tags
Embed Buttons
Link to S.T.A.L.K.E.R.: Way of the Wolf by selecting a button and using the embed code provided more...