Sozin's Comet mod is not going to release anytime soon when Bannerlord comes out. Early acces or full release. The mod we be focusing on the Fire Nation primarily. From the units, castles, Lords and the firebending it self and more. The Fire Nation island is going to be added with the existing Banerlord vanilla map. The whole ATLA map is probably not going to be in the mod. I am the ony one working on this mod + i don't have the best modding experience under my belt. So i hope with this mode i see other modders trying to make a mod about ATLA.

*For the full release of the mod* 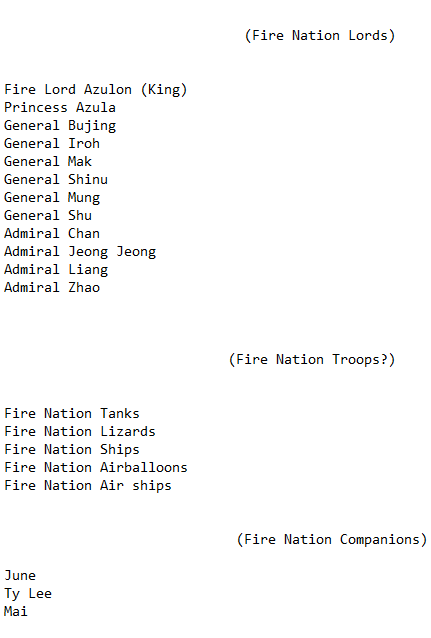 Much as I want to see this, so far it feels like another one of those pages for a mod idea that will never be implemented. :(
Will track for now, but have few expectations so far. Sorry.

I'm so excited about this!

I beg you, please finish this. Please for the love of god do not EVER stop working on this

you know 2 heads is better than 1

Hey I have this old fire nation model if you would want to use it Artstation.com

This realy help me with inspiration for the Fire Nation troops definitely, thank you.

OMFG A AVATAR MOD???? honestly that the series doesn't have any modern gamss is crazy, everyone would buy it. Did you guys get your hands on the modding tools already?

Its only me working on this mod. I am checking out the modding tools and how its works etc. But if you read the summary of the mod, this mod isn't going to be released any time soon. Even when to game is out of early acces. Im learning to become a modder you know. So i hope maybe some experienced modder out there can make a ATLA mod to.

Definitely man! Good luck with it can't wait to see what you're going to do!

And about the series doesn't have a modern game yet. You should check out Elca gaming on youtube.