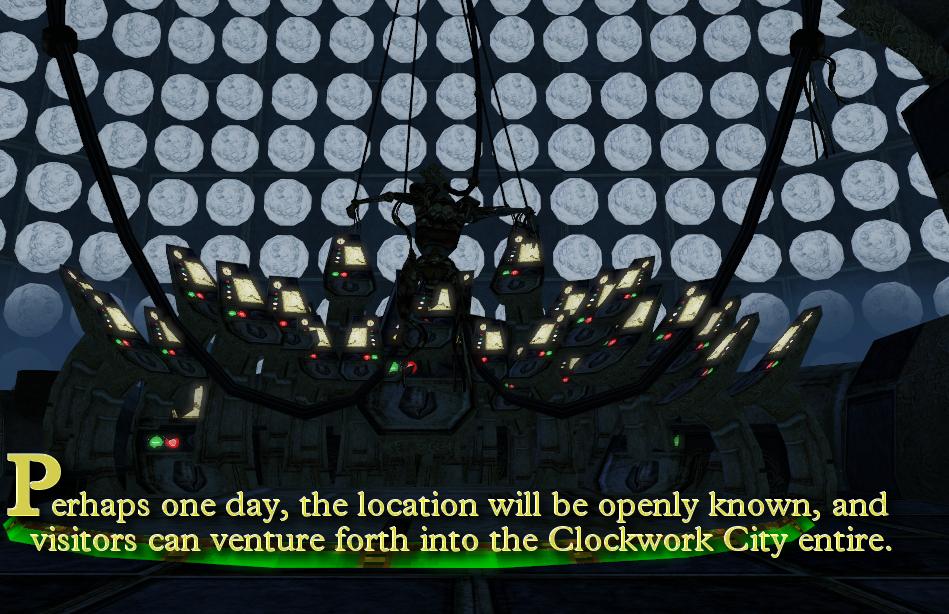 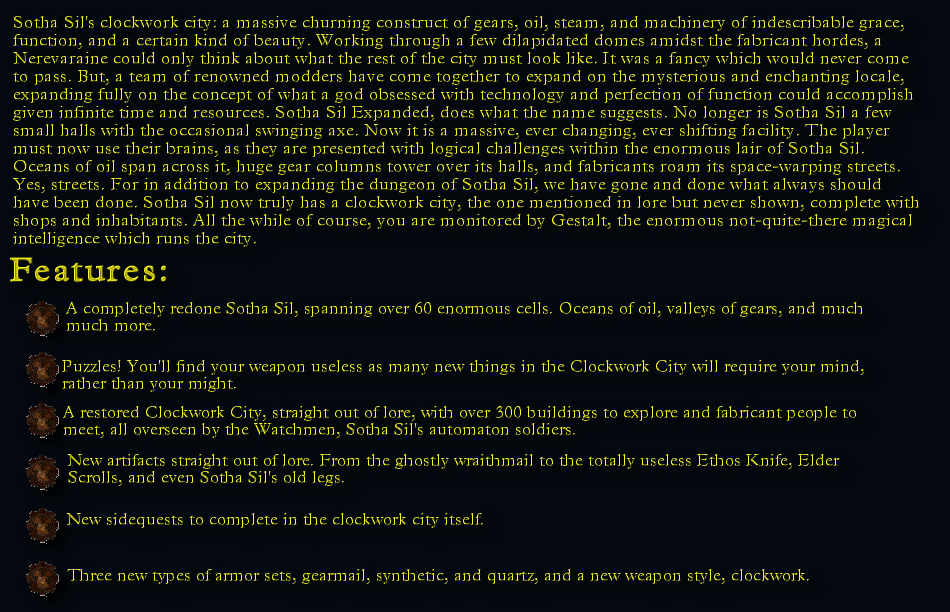 SSE does not change the ending of Tribunal, only expands upon it. Sotha Sil will still be dead, though there is, as we say, more to it. The only things SSE will modify is the end dungeon in Tribunal, and Barilzar's Mazed Band. Any mods that make changes to these will be incompatible, otherwise you'll be fine. If you have already beaten Tribunal and have the Mazed Band in your inventory, equipping it and teleporting to Sotha Sil will begin SSE, including the fights with the new Imperfect and Almalexia. Tribunal and Bloodmoon are required for SSE, though no other mods or plugins are. We still recommend Saint_Jiub's Clockwork City Reborn for textures, as SSE was built with it in mind. As for system requirements, if you are capable of running Morrowind on high settings just fine, you will also be able to run SSE. However, those with things such as MGE will be able to see more detail, as SSE has many interesting things rendered out of vanilla view range. All resources may be freely used, though if you do, please give credit.

Welp folks, we're here. The home stretch. After little more than a year in development, SSE will soon be ready for release, with all the goodies you've expected. In addition to a really really really big expanded Clockwork City (we're talking the size of Bloodmoon) we've got sidequests and crazed robotic NPCs galore, as well as three new sets of armor, a new weapon line, and a bunch of other things. Check em out in the screenshot section.

5 districts down, 1 remains. And lo, the mod edges ever closer to release.

Another update! We edge closer and closer to release.

Thought it was dead did you? Well no, it isn't and you're wrong.

Yet another part of Sotha Sil out of the way, and thus the mod's release creeps ever closer.

Patch 2.1 fixes some duplication issues in the early vanilla cells. If you want to play SSE with Patch 2.0 from the beginning, you MUST get this file...

Patch 2.0, a new year a new version! This is the full version, including all previous patches. -Redoes a vast majority of the Arboretum with new interiors...

Patch 2.0, a new year a new version! This file is for those updating from the old versions to the new one. Features -Redoes a vast majority of the Arboretum...

Like any patch, encompasses all previous patches: for full Changelog check description.

Patch 1.2 released. Like most of my mods, it encompasses all previous patches. Things fixed: -The Headless Man now accepts his head back -Watchmen have...

Patch 1.1, fixes the issues with the Chamber of Soleh, the Legs of Seht, and the quest 'Power Corrupts'

I'm having a problem finding the GDR_Masterfile.esm file and the dn dwemer tileset.esm file.

Is it possible to patch to a later version (1.3 -> 2.1) mid-game. Even from one that hasn't entered the Arboretum yet?

When I did, I experienced an Expression Error.
If not, it isn't critical, as i still have the old ESP saved. But it would be nice...

I had a patch all ready for you guys, but I'm afraid ModDB has decided that uptime just isn't something they enjoy! For now, try getting the patches off of
Download.fliggerty.com
Fliggerty, and Nexus.

Nice mod, but REALLY needs a walkthrough one day. Some parts are just too cryptic or random to figure out, me and my friend has been "stuck" in the mod for days (IRL) not because its fun but because it drags on and and we got stuck a lot.

Again its very nice and full of content, but now we just want to leave and finish the Tribunal storyline. I could cheat/teleport, but I hate doing that. Defeats the purpose. I could describe the things that keep slowing us down, but that would take awhile to explain at the moment... lmao

So yeah, walkthrough would be greaaat mmmkay?

Seeing as my walkthrough writer skipped town, sure, I'll start working on a walkthrough.

hello, it seems to want gdr_masterfile.esm and i cant seem to find out what it is or where i can find it, if you could please help

yeah turns out i'm not the brightest bulb in the crayon box, found it

Where did you find it because I'm having no luck.

Excellent. A another patch.