A speedy adventure full of pits and special mechanics, hovering far above a vast cityscape. Just watch out for bombs and various spiky things.

Sonic With A Gun starts off with Emeraldus, a planet firmly in the Sonic school of level design with its tiered layout of multiple interconnecting paths. Noirlite returns to this style with a vengeance, featuring areas with no fewer than four separate paths laid one on top of another, each one with various holes in the ground inviting you to plummet to the next path down, and the next, and maybe even the next. As a byproduct of the layouts being so prominently horizontal, and thanks to the numerous invincibility powerups found hidden around the edges of your route, Noirlite may be completed very quickly once you've learned where the various traps and enemies are lurking. You might consider this something of a breather planet. 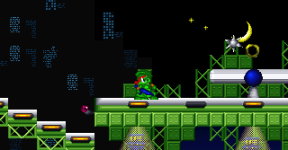 Although the primary culture of Noirlite appears to be massive constructs of skyscraper-styled buildings, hundreds of stories tall, you spend your whole time running around what looks to be a green-tinted construction site floating high above the planet's surface. Construction, however, is the key word here, for there are countless moments where the metal platforms simply cease to exist, and all you may hope for is a bright red STOP sign to warn you of your potential fall. Fortunately Noirlite provides several ways for climbing back up again, including this strange seesaw-like construction. 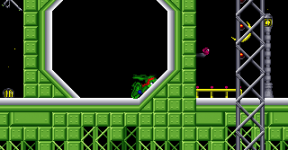 The Jazz 1 engine doesn't properly support loops and running up walls and so on in the style of a Sonic game, but if there was one zone in Sonic 1 that really emphasized such things, it was probably Star Light Zone, and so Noirlite digs in and gives you the very best it can. With loops, seesaws, floating platforms, fans, track switchers, powerups, tubes, and springs of various shapes, Noirlite contains an absolute wealth of ways to get around the level, provided you're not too distracted by all the bright lights and shiny colors. 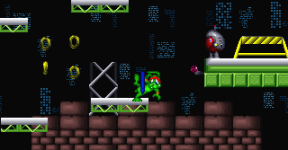 These rust-red buildings appear only in the bottommost areas of the level, and serve as a warning that you're finally near to the planet's surface. A fall from here will take you straight to your death with no fifth or sixth alternate path to catch you. Even that wouldn't be so bad were it not for the bomb-themed enemy to the right, who will explode into a fountain of fireballs and knock you off your platform if you don't kill him first. 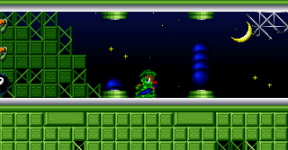 The second act borrows a couple elements from Sonic 2's Chemical Plant Zone to keep things fresh. But don't worry, there's no purple muck to die in this time around. Labyrinthion is past, and I'd need to be pretty sadistic to spring another water level on you just like that. Just keep running and jumping, and remember that Noirlite's open areas and bright lights hide some of the most elaborate secret areas and shortcuts in the game, if you can find them without falling to your death.