Four new screenshots of the second main planet, and discussion of some ways that SWAG's level design differs from the original game's.

It's impossible to escape the fact that Jazz Jackrabbit 1 was partially inspired by Sonic the Hedgehog in the first place, and perhaps nowhere was this more obvious than Pezrock, which gives inescapable Marble Zone vibes to even the most casual observer. The only thing missing was the lava, which was shunted off to the similar planet Marbelara, where an elaborate grassland/volcano theme was added to the mix for variety. Marbelava, though, throws away those pretenses and reunites all the borrowed elements in one long deadly castle. 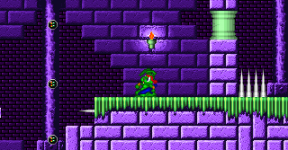 Marbelava takes a largely understated approach to its graphics, with the bulk of the level made up of various shades of purple and some light green accents, and the walls relying on a simple brick texture instead of growing so complex as to distract you from the gameplay. The grass is inherited from Diamondus, but given some additional shading and a subtle crystal effect possibly reminiscent of Ceramicus. Finally, white spikes (and red lava) advertise their danger through their contrasting palettes. 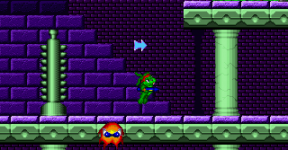 Unlike Emeraldus, where at almost any point in the level there was another path either above or below you, Marbelava is fairly linear. While some alternate routes do branch out from the main one from time to time, they can mostly be qualified as secret areas and/or shortcuts. You'll thus have little trouble deciding which way to go in order to reach the exit, if only you can make it there alive, but the most obvious path may be neither the easiest nor the most rewarding, so remember to check for suspicious tiles in the walls. 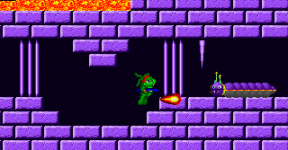 Like the dangerous caves of Emeraldus, Marbelava features murky dark passages littered with spikes and fire, though several secret areas share the same aesthetic. Note that this is what qualifies as a confined passageway in Sonic With A Gun; the native Jazz Jackrabbit planets, while usually pretty, had an unfortunate tendency to shove you into tiny tunnels made from single wall tiles, but you won't be seeing anything like that here. 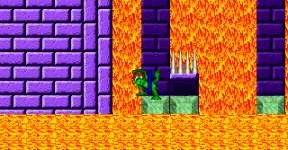 Marbelava introduces another major difference between the Sonic With A Gun levels and the native Jazz 1 levels, besides the multilinear layouts and the wider open spaces. Sonic games, for better or worse, are known for their semi-cinematic set pieces, from speeding down enormous clocktowers in Sonic Unleashed all the way back to racing Metal Sonic in Sonic CD or outrunning the bombs of a random zeppelin in Sonic 3 & Knuckles. Sonic With A Gun does its best to emulate this style within Jazz 1's engine and resolution, largely through the addition of numerous objects to ride around on as they move through the level of their own accord. Here lava falls to the bottom of the room and then rises up like a tide, carrying a series of green blocks with it. But the farther up you go, the more blocks will be prevented from rising and lost forever beneath the fire...