Mod's half over; time for a water level! Introducing puzzles, a new weapon, and lots of unfamiliar enemies and other gimmickry.

During development, Jazz Jackrabbit 2's "Marinated Rabbit" level was titled "Obligatory Water Level" instead. Sonic 1 even included a fourth water level out of nowhere instead of a proper third act for Scrap Brain Zone. Platformers love water levels. Players of platformers, though, are rather more divided on the subject... done right, the water level can be an amazing experience that switches out parts of the core gameplay just when players are getting complacent. Done wrong, the water level can be slow and frustrating. Labyrinthion, of course, is the first type. 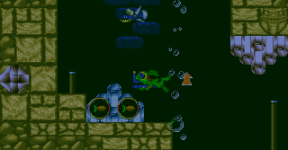 Labyrinth Zone in Sonic 1 featured a non-swimming hero who had to collect giant air bubbles in order not to drown while surrounded by innumerable spikes and other dangers. Dreempipes and Lagunicus in Jazz 1 featured a swimming hero who collected carrots for health and pressed buttons to adjust how much of the level was submerged at any given time. Labyrinthion combines both gameplay styles to create an elaborate underground maze wherein obstacle after obstacle can only be overcome after you find the next button to raise or lower the water to a more convenient height. Not only that, Labyrinthion (as the beginning of the second half of Sonic With A Gun) also serves as your introduction to the Carrot Grenade, a carryover from Jazz Jackrabbit Advance. 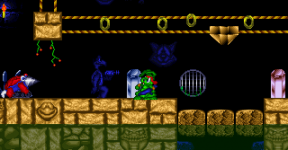 The Jazz 1 engine imposes various technical limits on levels' backgrounds, and even moreso when a level has water in it. Combined, these would have made any attempt to emulate the original Labyrinth Zone's background impossible, were it not for the Sonic 1 8-bit Labyrinth Zone, whose background was a simpler system of blue bricks against black. This was carried over to Sonic With A Gun to create a truly beautiful level with brilliant orange blocks set against deep black and blue. 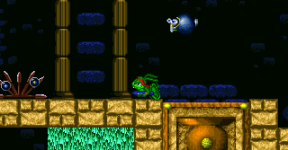 Playing two long water-based puzzles immediately after one another could become tedious, so Labyrinthion's second act--perhaps my favorite in the mod--is set higher up in the underground labyrinth, leaving you to race among waterfalls and many unfamiliar obstacles, while managing not to abandon the first act's pervasive puzzle element. For constructing a mostly non-waterlogged environment, Sonic With A Gun takes its cues from Sonic 4's Lost Labyrinth Zone... wait, you say, Lost Labyrinth Zone? Oh no, wasn't that the zone with... 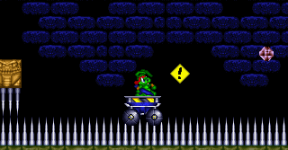 I'll just show myself out, shall I?