Remember that HL1 snowball fighting mod back in the day? It was around for one of those winter season. I always thought someone would bring it back for HL2 and I'd get to re-live that fun mods game play all over again. No one did tho, and Ill be damned if I let that happen again this year! Here's a snowball fighting mod for release this winter!

Available beta, mapping, and new Power-up in the works!

News Time:
Thanks for coming back everyone who's following! If you are not, then hello newcomer!

For starters, I had difficulty arranging time with friends to test the mod over a network. So, last weekend (after a few pints and panicked rationalizations of time management) I leaked a beta out to see if there would be any takers for testing. But I think I went about it wrong, and at a bad time. Instead of posting it here on ModDB, like any other self-respecting mod developer would have, I posted on Reddit, the week after FO4 came out. And nothing happened. I'll just link you the topic here in case your interested in fiddling with it, or testing it for me and reporting back your findings: Reddit Beta. I do not suggest playing it if you can wait another week to play something with less bugs and all the following new features.

So whats new since last update?

Mapping!
I started two new maps that could play all the different game modes. The way I approached them was to include bases with team spawns hidden from the opposing team, symmetrical mapping style for rapid production, and very light on the detailing. They were done in almost one afternoon. Instead of describing them, check out the few pictures i uploaded here, and the video below.

Audio!
I collected and edited a bunch new sound and implemented them into the game code. I wish I had all the tools to record effects, or I had the money to buy one of those giant sound packs, but freesound.org is amazing, and this project is never going to ask for any money from anyone ever so i don't feel bad for borrowing from them (those many individual sound developers). Damn I forgot to note all my resources for the people to thank. (sorry peeps and thank you for your efforts!).

Code!
Speaking of thanks, very big thanks to Chainmanner for writing a cloak tutorial on the VDC back in 2014 on player cloaking for SDK2013 im single player, which made me scrap my model swapping method, and loose a days work, for a material proxy based method. With some hassles I got it working for multiplayer, and that folks, brings us to the newest member of the Snowball Fight Power-Up's: 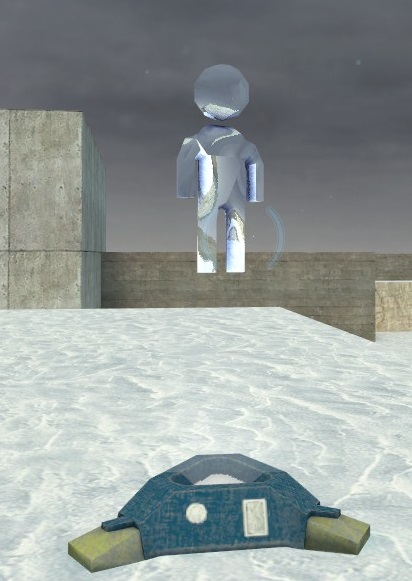 - Another neat thing about placing the power-ups into your map: You don't need to be accurate, lift them off the ground, nor put those little float stands beneath them. using the default settings for the map entity, the power-up will automatically drop to the floor, raise to the wright height, and place the fancy glowing device below it. All this is optional and changeable in the map editor through the entity properties.

Snowmen Damage! Snowmen got a couple levels of damage. Now the snowmen divide their total life (kicks: however much the serve admin decides), and changes the model when a new level of life (third) is reached. These levels of damage were rushed (sorry for the lazyness modeling technique):

Bouncers!
For my love of HL1 DM, I'm bringing back the HL1 bouncer things (no idea what the scientific term is... bouncer thing.) 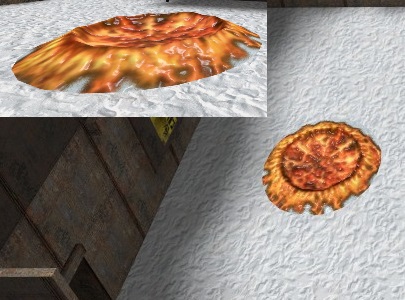 One more week1!! ok, well not for the v1.0. I don't think I'm really going to have a solid game next week. I've realized that I'm still constantly finding new ideas, and things to implement. I still havnt done much lan or server testing. What I can do for you, the people who want to start the snowball war early, I will make available (here on Moddb), a new beta! With all the features and changes that will be made up until sometime early next week, for release next Friday Dec 4th. I hope to get a lot done and working by then, and after that, I will continue development until I feel the mark of v1.0 is suitable. That's all for today!
As usual here's a video to visually demonstrate the news updates, thanks for reading, or skimming, or just looking at the pictures! Until next week!

You should Retexture the Bouncer Pads to fit the Theme of this Mod.

nope, I'm coding team safety, and out of the map, zones to kill players. And thinking about adding a new weapon. Maybe you can do that for me when I release the beta?