This mod aims to completely change the way you think about settlements. You'll now be able to create detailed, living places with minimal effort.
The ultimate goal: making every settlement a unique and awesome looking Fallout city, with perks and rewards that help you at every stage of the game.


WARNING! Before uninstalling, scrap all plots you make. As of patch 1.0.5 there is a Self Destruct Sequence in the holotape that will do this for you!

I'll be releasing several videos related to the mod each week, covering things like usage, future changes, and patch notes. There are already a ton of videos describing a lot of details on how the mod works if you want to learn some of the nitty-gritty!
Subscribe to my channel on Youtube: Youtube.com to be notified when new content is released!

One of the biggest problems with Fallout 4, is just how disconnected the Settlement system feels from the rest of the game. Settlements lack that Bethesda game feel of exploration and progression, and so there's not much incentive to actually use the system.

It also feels bizarre that you have to micromanage all these people, and personally plant seeds and decide where people sleep - you're their leader, not their mother! You're supplying these people with security and tons of resources, why can't they kick in and help out with building up the city?

In version 1.0, this mod adds the start of that vision by allowing you to place down zones (ala Sim City) that will make your settlers create buildings of the appropriate type in that zone. It includes a series of systems to help bring your settlements to life, and make them more dynamic and interesting to engage with.

Add Your Own Stuff: 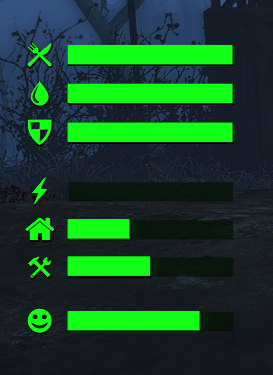 If you have the HUDFramework mod installed, you'll gain access to a Workshop HUD piece designed specifically to make the goals while playing Sim Settlements clearly displayed in front of you whenever you're in your Settlements.

For a much more in-depth look at the ideas and systems behind Sim Settlements check out the video series below!

By the time this mod reaches it's final form, the settlement system should be so engaging that you won't dream of ignoring it again!

Q - Why don't the items show up in my Special menu?
A - Watch the Quick Start Video at the top of the description.

Q - Can you create plots to use inside the existing buildings or in the Vault DLC?
A - That's outside the scope of the mod right now, though at some point I will open-source the framework so the community can expand the system as much as they like!

Q - I'm having trouble with Commercial plots/Building Upgrades/Taxes!
A - Check out this video to get some background details on how the code works: FAQ Episode 1

Q - Why is this an ESM?
A - Sim Settlements includes tons of resources for anyone to add their own stuff to the mod. While this can be done without parenting to Sim Settlements, it's a ton more work and will inflate the size of their mod. By making this an ESM, other mods can set this as a Master File and make direct use of some of the objects in Sim Settlements.

Q - Where should this go in my load order?
A - ESM mods will be naturally near the top of your load order. Since this mod doesn't affect any vanilla records, it shouldn't matter where it is. If you're using HUDFramework, that mod should be above Sim Settlements in the load order.

Q - Is any DLC required?
A - Definitely not. Everything was built using vanilla or custom assets.

Q - Are there any limits to how many plots I can build?
A - Nope, go nuts.

Q - How does this affect my build limit?
A - Since this mod spawns in most of the objects, it actually bypasses affecting the build limit by quite a bit. The actual plot and the posts will count towards your triangle limit, but nothing else should. So you get a virtual boost to your build limit by using these!

Q - Will this hurt my frame rate?
A - For the most part, this won't affect your frame rate anymore than building a ton of workshop items would. There are a few shop models that have crazy amounts of high-poly clutter, so those might cause a dip - I will look into optimizing those for a future release.

Q - Why do the sleeping bags flicker in and out?
A - All items that are spawned by the plots are refreshed at each building stage, since the default build speed is now real-time, that happens quite rapidly. A workaround for the builder's beds may be added in a future update.

Some of the shoes and clothing in the Clothing Stores are a little boxy, had an issue with a nif exporter. It will be fixed in a future release.

Twisted Terminal bug: If you get to the museum and find the terminal at an unnatural angle, it may be covering up the holotape! To fix this, save and exit, disable the mod, reload the save, save and exit again, then activate the mod again. When you load back in to that last save after a few seconds the boxes, sensors, tape, and terminal should start spawning in to their correct positions.

This mod looks incredible and it might just be the push I needed to finally buy Fallout 4, thanks and I can't wait to see more!

This mod adds a Grand Total of 196 new enemies to The Commonwealth! A mod which adds Enclave Remnants NPC's to the Commonwealth. There are a total of...

Moribund World is an environmental art mod whose main idea is to recreate the visual atmosphere of the first Fallout games, with its classic color schemes...

Adds a workbench that breaks down misc items into their base components.

A Better World is an upcoming story-driven new world modification for Fallout 4. A Better World tells the story of two women on the run from the Institute...

"The Plateau"(project name) is a Fallout 4 fan fiction story mod taking place in a fictional location in Ohio, 2287