Travel to Russia and hunt the native animals of the Siberian region.

Animals to hunt on your tour 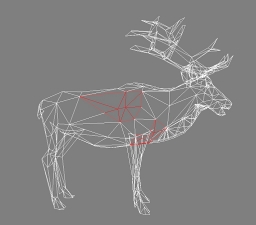 The Altai wapiti is a subspecies of Elk found in Siberia. It is one of the largest animals in this region with a body length of 1.6-2.7 meters (5-9 ft) and weighs up to 500 kg (1,100 lb). Wapiti feed on grasses, plants, leaves, and bark. Though they might not appear threatening, wapiti can be aggressive and attack without warning. You'll earn 870 points if you hunt it. 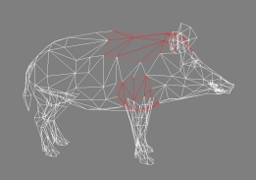 The wild boar is one of the widest-ranging mammals in the world due to its adaptability to a diversity of
habitats. This is a bulky suid with 1.2-1.5 meters (4-5 ft) in body length and can reach 100 kg (220 lb) in weight. As an omnivorous species, wild boar consumes food of both plant and animal origin and will charge you when they are threatened. You'll earn 335 points if you hunt it.

The Eurasian wolf is a subspecies of grey wolf native to Europe and former Soviet Union and measures 1.1-1.6 meters (4-5 ft) in length with a maximum weight of 70 kg (155 lb). Wolves commonly prey on medium sized ungulates like wild boar and roe deer. They can become very agressive if they feel threatened. You'll earn 150 points hunting this animal. 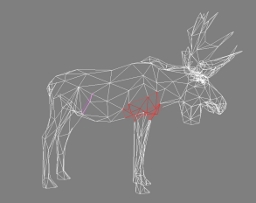 The east siberian elk (or moose in North America) is the largest and heaviest animal in this region with 2.5-3.2 meters (8-10 ft) in lenght and weighs up to 700 kg (1,543 lb). Being a browsing herbivore, this animal is capable of consuming many types of plant or fruit. They aren't aggressive, but can be provoked to behave with aggression. You'll earn 1000 points if you hunt this animal. 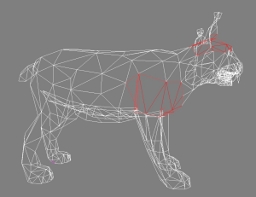 The Eurasian lynx is a medium-sized wild cat native to Europe, Central Asia and Siberia. It is the largest of the four lynx species, ranging in length from 1.1 to 1.3 meters (3-4 ft) and weighs up to 45 kg (100 lb). This lynx feeds on small to fairly large sized mammals and birds. Although they typically avoid people, they may attack you if threatened. You'll earn 750 points if you hunt lynx. 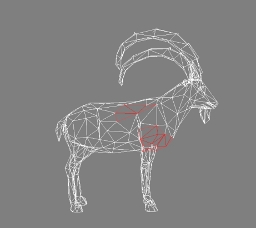 The Siberian ibex is a species of ibex that lives in central Asia. They're large and heavily built
goats, with 0.8-1.2 meters (3-4 ft) long and weighs up to 110 kg (242 lb). Their diet primarily consists of alpine grasses and herbs. They aren't dangerous at all. They'll flee if you get close, but stay distant.
You'll earn 910 if you hunt this animal.

The snow leopard is a large cat native to the mountain ranges of Central and South Asia, measures 1.9-2.1 (6-7 ft) in length and weighs up to 55 kg (121 lb). This animal is a carnivore and actively hunts its
prey, but also eats carrion. They are the least aggressive of all big cats, but can attack when threatened. You'll earn 5000 points if you hunt it. 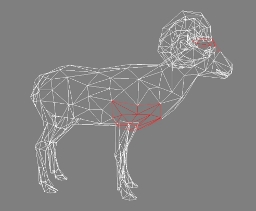 The snow sheep is a species of sheep from the mountainous areas of Siberia and is medium sized, with a compact body, 0.8-1.2 meters (3-4 ft) long and weighing a maximum of 110 kg (242 lb). This sheep feeds on lichens, grass, sedges, shrubs, moss, and mushrooms. They are typically not aggressive animals, but can get defensive. You'll earn 1140 if you hunt this animal. 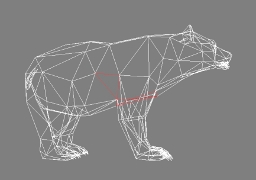 The Ussuri brown bear is a subspecies of the brown bear. It's one of the largest brown bears, measuring 1.9-2.5 meters (6-8 ft) long and weighs up to 500 kg (1,100 lb). Although the diet of an Ussuri brown bear is mainly vegetarian, being the largest predator it is able to kill any prey. They are unpredictable in temperament and will attack when they are surprised or threatened. It gives 3450 points if hunted. 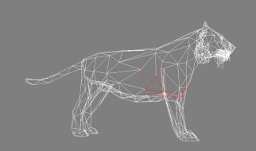 The Siberian tiger is native to the Russian Far East, Northeast China, and possibly North Korea.
Measurements range from 2.4 to 3.0 meters (8-10 ft) in length and 320 kg (705 lb) as max weight. Its favourite foods include small and large mammals; but Tigers also eat fish.
They are territorial and will attack you from any distance. You'll earn 10000 points if you hunt it.

Coming up next, you will know the animals that are very common to find in the ambients of each area. Consider that they won't give you points if you hunt them!

The Siberian musk deer is found in the mountain forests of Northeast Asia. It is most common in the taiga of southern Siberia, but is also found in parts of Mongolia, Inner Mongolia, Manchuria and the Korean peninsula. Their small shape allows them to hide from predators through tiny openings in the rocky terrain and also allow them to run exceptionally fast from their predators. Although bearing fangs, Siberian musk deer are actually herbivores with their main source of nutrients being lichens, pine needles, leaves, and tree barks. Adults are small, measuring up to 1 meter (3 ft) long and weighing up to 17 kg (37 lb). This animal is not dangerous and will run away if you get too close to it.

The Eurasian eagle-owl (Bubo bubo) is a species of eagle-owl that resides in much of Eurasia. It is one of the largest species of owl, and females can grow to a total length of 75 cm (30 in), with a wingspan of 188 cm (6 ft 2 in) and a weight of 4.6 kg (10 lb), males being slightly smaller. Predominantly their diet is comprised by small mammals such as rodents and rabbits and their kin but also they will not infrequently prey on larger mammals and birds of varying sizes. More secondary prey can include reptiles, amphibians, fish, large insects and other assorted invertebrates. This bird is not dangerous.

Now that you know the animals of the Siberia region, enroll to Diana Hunting Tours and hunt your biggest animal trophy!

Weapons available for your hunting tour

Here is the full list of weapons Diana Hunting offers you to equip during hunts.

Areas available for your hunting tour

This is a list of the areas in Siberia region which you can choose for your hunting trip. Also, detailed information about these areas is displayed for...

On this article, you will know what are the other features that Siberian Expeditions offers to players!

The Siberia region is available for your hunts. So, Diana Hunting Tours is enrolling international hunters to these exciting huntings!

Any likelihood of updating this with Modders Edition support at some point?

This gets my vote for MOTY! 😺

I owe you an apology. I saw the one comment on Saurian Target's video from you where you credited RaptorKlaw for the skins, and without being able to find obvious credits and hearing others praising you and your team for the beauty of the models, I thought this was a case of random people claiming ownership of them. I was wrong, and that's entirely my fault for not going through the page carefully enough to find them. Make some reading comprehension 0 memes.

I would have asked each creator independently, but like I said, a majority are retired and don't have any contact information. All the models and some of the skins you used unmodified are public domain.

The thought of people outside of the community using ZT2 models is a frightening slope. Even though you were respectful about it, it isn't hard to imagine someone, or even a company, seeing the database as a collection of free HQ models, and porting them for personal use without the creators' permission with a "no one will notice" or a "if they aren't public domain, then they shouldn't upload them to make it public for download, but they did" sort of mindset. I hope you understand why I reacted so harshly, and I hope you can accept my apology. I think it's on the ZT2 community to figure out collectively how to prevent this sort of scenario in the future, not some lone person.

Abosulutely brilliant mod and it does not even feature dinosaurs. Everything is so well done.love the maps love the animals love the weapons they sound good.just a great mod.