Shattered Paradise is an expansion for Tiberian Sun on Openra, it's goal is to (im)balance the game by adding new factions (Scrin, Mutants and Cabal) and reworking the original sides, all of this to create a game a little more varied and balanced than TS. The mod puts a lot of emphasis on making the factions as asymmetric as possible.

A summary of graphic changes and new in game mechanics.

Welcome to our fourth Dev Blog, this one will cover in depth changes of the mod, featuring new graphic changes and new ingame mechanics.

First off, we removed most of the specific traits of the units to make them easy to understand, e.g removing the “uncrushable” trait for infantry.

What most mods do is create rules, or follow the typical C&C rules, then generate units that don’t follow these rules arbitrarily. For example, back then, Templars couldn’t be crushed. Why? To make the unit different than the rest. Due to all this arbitrary assignment of features, a new player would not be able to know which unit can counter other units without reading the tooltips, and forcing players to read those before playing leads to a subpar experience.

Coming from Boolbada’s fork, SP now has a radiation mechanic that works similar to the Desolator from Red Alert 2. While the damage-per-second is not as extreme, killed infantry still spawn lifeforms, it comes in two flavours.

This is just a representation, no mutants were harmed in the creation of this animation.

We did this change a long time ago. Since there is no support for the original Firestorm Generator, we decided to mix things up a bit, giving it a togglable ability that applies a damage resistance buff to nearby units, and a literal firewall that only damages enemies, meaning you can either enclose an area or forbid your enemy from escaping. Fun stuff.

YOU SHALL NOT PASS (or so my university teachers said)

Originally, the Templar was a laser-carrying infantry which did full damage to all armor-types, making it too strong and bland. it got replaced with a flamethrower to give it a more defined role as an infantry-killer. 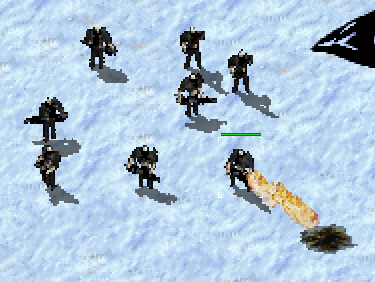 Added as a hijacker remplacement, they are Stealth infantry, armed with a laser rifle that deals high damage to most targets, but has low health, similar to the renegade stealth soldier, besides that, they also have the useful ability of creating holograms of units nearby, creating a decoy army to distract enemies.

Players have quitted early thanks to these decoy armies.

On the other hand, we had a hijacker unit that could steal vehicles, but we removed due to the difficulty it brought and some bugs.

We brought back the old artillery to its roots, as being a squishy slow-firing but heavy damage dealer. This unit will also cloak itself if it doesn’t fire on 6 seconds, the Base voxel was made by ErastusMercy. 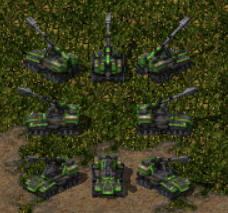 One of the scrin support units, the Vanguard, applies shields to nearby friendlies. The shield will ignore the first 4 shots before disappearing. 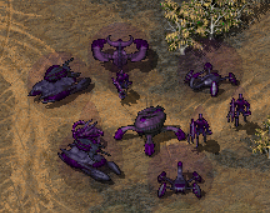 Used by the Subjugator of Scrin which can take control over up to 3 enemy Vehicles. Out of balance reasons we only made the unit able to control Vehicles. 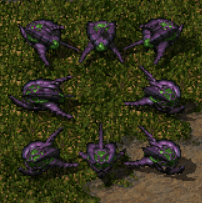 This unit was created to add a little more flavour to the Scrin Armada, as it only had a flying artillery unit and fighters before, it uses the code of the user boolbada (maker of the OP mod) and it serves as an anti armor battleship basically, the code works similar to the Red Alert 2 aircraft carriers, Fighters go where the carrier orders to force fire, and do the same order. 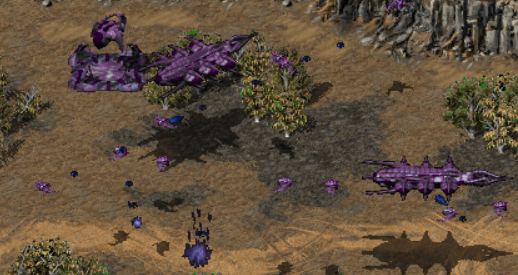 After trying to figure out where to put the Seer (previously it was a glass cannon that deals full damage to everything), we decided to lower its damage and change its role to a support one. Now, the Seer deals less damage than before, but can be deployed to intimidate or inspire all nearby units to fight harder, increasing movement speed and attack speed, while also increasing damage taken. Think of it as a fanatical charge with little regard for their personal lives. With these changes the unit has been renamed to Tyrant.

In the last 4 months, I worked on the 3 remaining Construction Yards that still had the default look. I focused on making each one look more fitting to each faction’s aesthetics. Making the MCVs and buildup animations was the hard part, but now the hub of each faction’s base looks and feels unique.

We decided to give each side its own carryall to help improve map quality and allow for more fair engagements, before this, the actions of the players were defined by the shape of the map, and if it didnt had enough openings, games could drag on for a long time, now, carryalls are not always game changers, but they help. 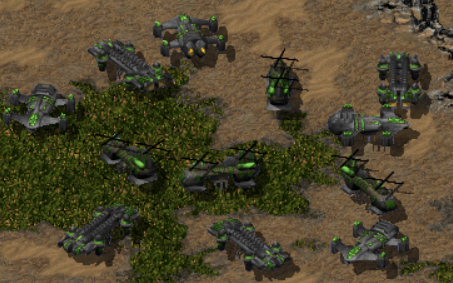 New variants for everyone!

In general terms, tech structures make games a little more dynamic as they add more points that players can contest to get an advantage early in the game. Since the last dev blog, we've added the following tech structures into the game: 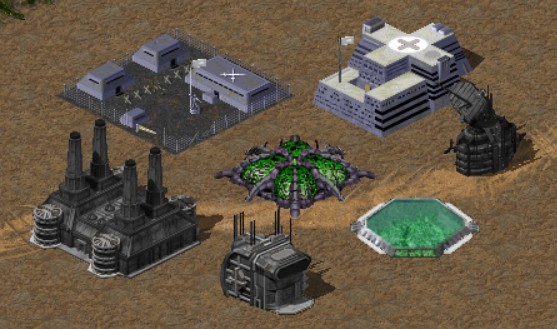 Overall, we converted most of our voxel based graphics into sprite graphics, to allow for better control and performance, with the cost of tanks turning on slopes, besides that, here are some of the graphic reworks we did: 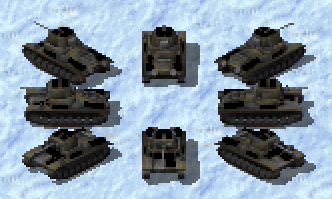 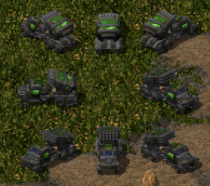 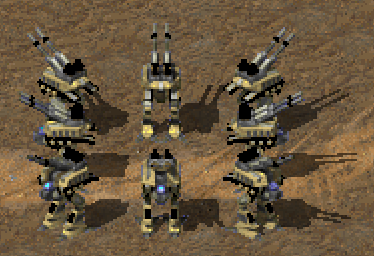 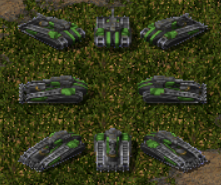 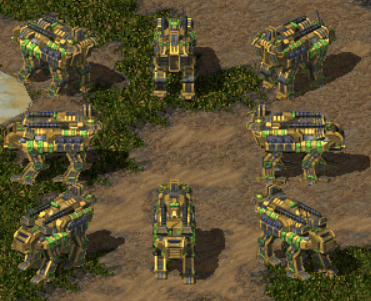 New Mammoth MK II, can crush vehicles and its turreted. 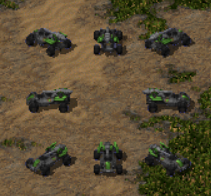 The Nod buggy now behaves as an IFV unit, base voxel made by ErastusMercy. 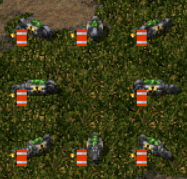 And the bike is a suicide unit. 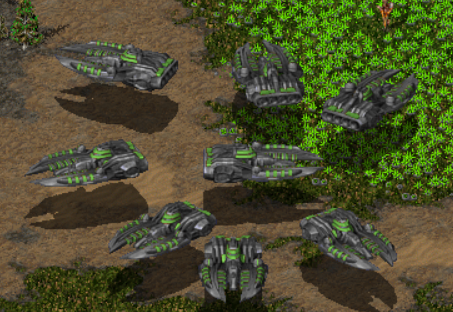 Nod Paladin Cruiser, a battlecruiser with a charged laser array that also cloaks nearby units. (Cabal Mech is renamed to minotaur) 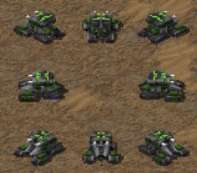 And finally, a new stealth tank.

Two years ago, we introduced custom super weapons for each side. The problem we faced was balancing each superweapon to feel both unique and powerful. Hence, we simplified the system to make them instakill any enemy units hit within the radius. The Superweapons differ in Support weapons and Ultraweapons of mass destruction all with unique abilities and animations.

As a recap, here’s the progress up to now:

Guardian GIs are a good example of how you can make infantry uncrushable. They even *say* it. But the big deal is the whole visual design and the fantasy to the unit. They're an anti-tank. It would suck if they would be crushable by tanks in a state where they'd be the most vulnerable to that which also happens to be the state where they're suppose to be countering tanks. It wouldn't make logical sense for the unit's character. The unit also has a distinct visual cue that you can do something with them, the deploy icon. Finally, they are also ******* *massive* and very visually distinct when deployed, compared to all other infantry in the game. They take up so much space on the screen by comparison. Nearly as much as any vehicle. And they also have the bright chromium blueish silver color with the pretty distinct team color.

I'm just babbling on, providing my thoughts. That's all. Obviously, the best simplification you could make for new players to C&C is just remove crushing entirely.

Dude what the hell, I was pointing at the fact the just removed exceptions, like uncrushable units or infantry with custom armors.