Scientist Hunt is a Half-Life modification which makes murdering scientists the objective of the game. There are two teams, and each team must compete to murder more scientists than the other team in one of three separate modes of play. SH also features two non-team-based modes of play with entirely different player scenarios, named Live In Fear and Madness. New features include enhanced scientist physics, completely new scientist AI, and much more.

This mod was developed by Rich Whitehouse (http://www.richwhitehouse.com) and Brian McClelland (Hondo). The last official release (1.2) was in 2001 for the WON version of Half-Life but fan-made patches exist for the Steam version. It is also playable on WON2 and will also be playable on NeuWON.

Thanks for voting and helping Scientist Hunt on it's quest to become the 2022 Mod of the Year. You are now in with a chance to score some free games from our #modlove collection. Help this mod secure more votes by embedding the widget (or link) we have included below on your favorite sites. 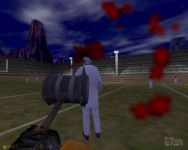 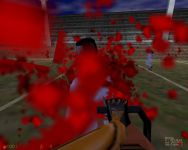 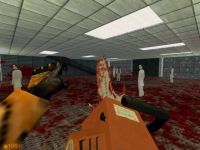 This new version includes a Linux port and increased stability and a server option to disable player killing among other changes.

This is a Steam compatible version of Scientist Hunt, which will fix issues with key binding. The following has been changed: - Steam compadibility ...

This is an archive I made of the Scientist Hunt Linux Server. Rich did a silly thing where the library for the server was included in the Windows release...

Note: I had to put this in a zip due to the way ModDB's file uploading works. Uploaded for historical (and modding) purposes. This was grabbed from Rich...

Uploaded for historical purposes. This was grabbed from Rich Whitehouse's site.

Uploaded for historical purposes. This was grabbed from Rich Whitehouse's site.

Finally getting around to making a review for this fantastic, brutal Half-Life mod classic of epic proportions. Scientist Hunt.., where do I begin? Firstly, this mod is old-school. Only your dads like me know about this mod. Second, it had great maps. Make sure to turn on violence mode to enable gibs unless you're son is playing. (Command is violence_hblood and violence_hgbibs.) This mod is badass and has lots of guns (2nd Amendment triggered yet liberals?) but not enough weapons as Scientist Slaughter house. If scientist slaughterhouse and scientist hunt combined, it would make the dream half-life mod for gore & killing scientists. I created my own map for hunting and killing scientists called Doktorwhiplashb7 for Sven co-op.This mod brings back memories of hanging out in IRC chats and killing sci's to kill the time, if you now what I mean. Anyways Doktorwhiplash gives this the Half-Life mod SEAL of APPROVAL for being a hit classic and memorable mod.Make sure to pick up the HD map pack and HD weapons and HD gore mods to enhance the experience and go slaughter some ******' scientists to that Metallica (Ride the lightning, Master of Puppets prefered) >:) \m/ Dok' out!!!

How I wish an OP4 version is available

Can someone tell me what's the name from that one map in the corridor where you kill lots of scis with amounts of adrenaline?

Since KingCuckold's servers are down for now, I've decided to start hosting Steam versions of my WON2 servers (including SciHunt). If it doesn't show up in the server browser, just add: servers.bloodbathsoftworks.com:27054

one of the best half life mods i've tryed..

you get 3 new weapons to kill scientists with..now that is fun