Salvage Storm Deathmatch. A match which transforms all the existing Unreal weapons into 19th century styled weapons for the deathmatch mode. Different look of the weapons, different feel, different gameplay.

Thanks for voting and helping Salvage Storm Deathmatch on it's quest to become the 2021 Mod of the Year. You are now in with a chance to score some free games from our #modlove collection. Help this mod secure more votes by embedding the widget (or link) we have included below on your favorite sites. 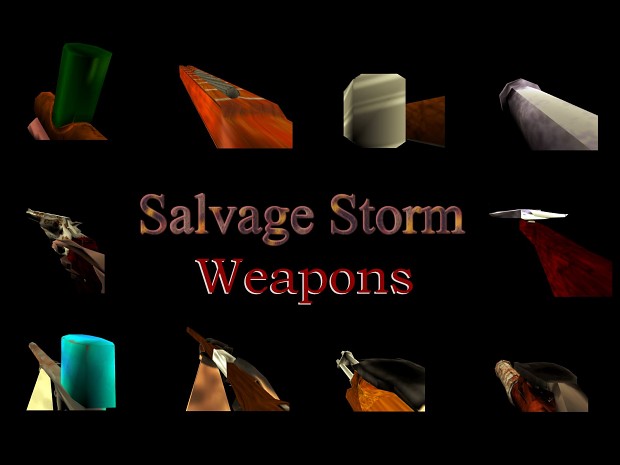 You can download the weapon set right now. All the weapons have been transformed and many of the projectiles, ammo models and ammo icons have be transformed also. You can also view the models in the 3rd person view also when characters use them during deathmatchs.

All the weapon changes and animation:

Some of your questions answered... I will polish them and I will also tweak them as some weapons are just a change from how they look but not entirely how they function. Because I want to get the main mod finished, I will polish them for that. It also means I'm openned to suggestions how the weapons should change in terms of gameplay. Anyone is free to join to polish the textures or chang the weapons and I'll be happy to take the textures and replace them. I will redo some models also to make them look better in the future. It's open for discussion.

Some things I couldn't do which I'll explain later but it's because some of the way the game is coded, it makes it a different challenge to mod, almost impossible and there's little point in changing the code, so I'll explain this at a later date when I put out an update in the future.

Some new footage... the minigun looks better animated. It's better then I expected. The other models I will improve in the future to make them look better because I was more concerned with functionally. It's tough being a suck up actually.

Making this mod has make me learn about Unreal Gold alot, so it does help me understand a bit about Unreal Gold such as the other multiplayer maps. Epic Mega games must had alot of fun making unreal Gold and there's actually not much to do. It still had taken me a few months to put together in my spare time and it wasn't easy. It's requires loads of thinking to work with Unreal and that's more important.

Enjoy and stay tuned for an update. Feedback is welcomed, you can post in here: Moddb.com

Or at the comments page.

Small Details for these Weapons

Complete list of weapons for Salvage Storm. Each weapons represents a backward 19th century version of one of the original weapons seen in Unreal Gold.

Making and animating 10 different weapons for a mod for Unreal Gold isn't easy, but there is a more focused way of doing so.

I've finished working on the modelling geometry on all my weapons, now to finish everything else, which will be easy.

Looking forward for it!