Rising Sun is a mod for Mount & Blade: Warband based on the Gekokujo mod, New release planned for 2020.

OLD VERSION DESCRIPTION, not indicative of content or plans for new version

Set during the late Bakumatsu and Boshin War periods of Japan (1867 - 1869). Fight to restore the Imperial Court or retain the Tokugawa Shogunate.

NOTE: This Mod incorporates a large amount of content from the old version of Blood & Iron (B&I II OSP). ALL western style UNIFORMS and some FIREARM parts contained in this mod were made by Parrot, Willhelm and the Blood & Iron team and CREDIT should be given to them for this content. 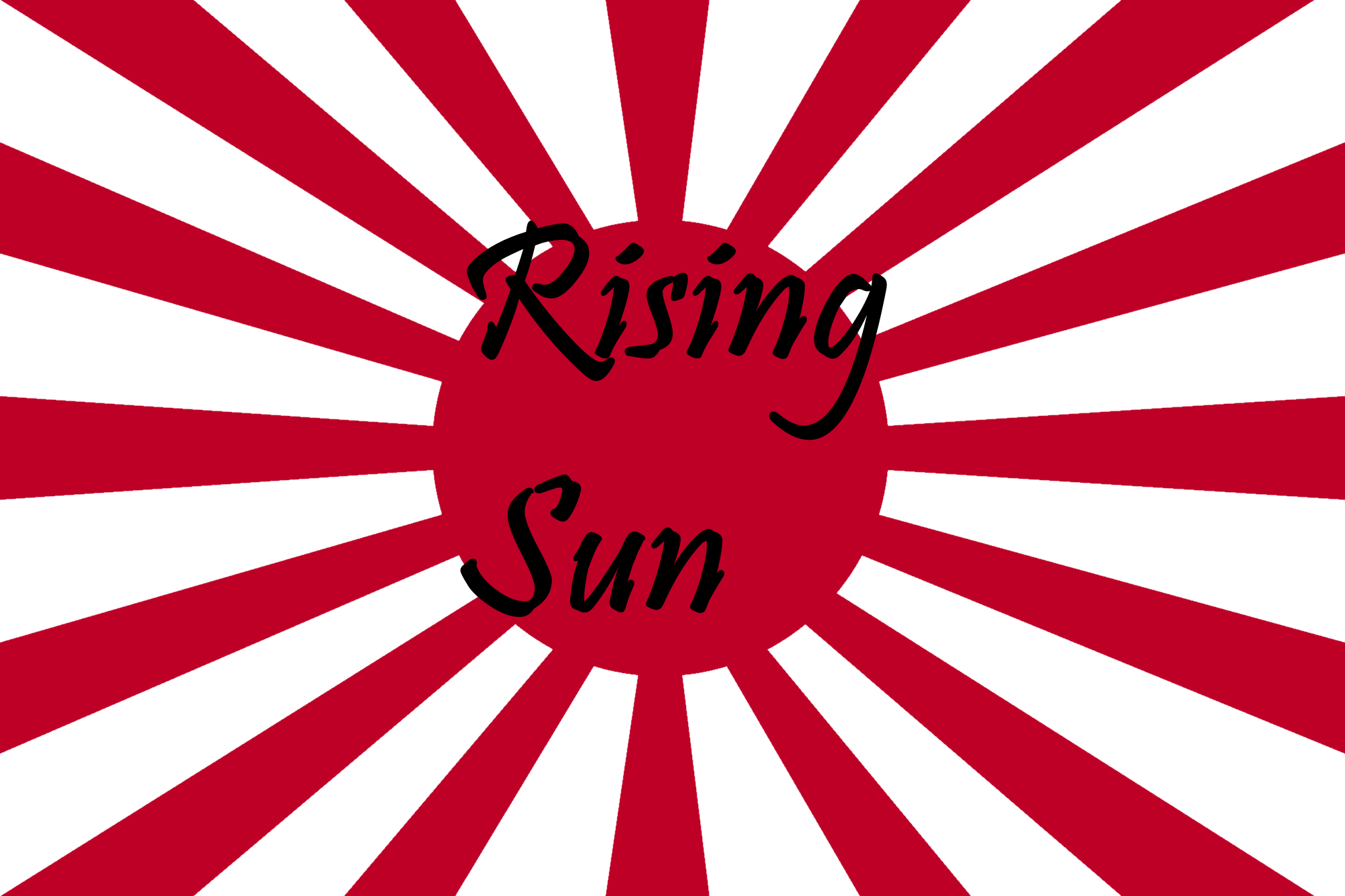 This is a mod I have been working on casually since mid 2015 and I have decided to release it at some point due to rising popularity of the subject matter to provide an opportunity to play in Bakumatsu period Japan at the moment. The mod's content would probably be osp just because marty4286 made his content available to use, however I can't just give it away since most of it is taken from other sources or asked permission for. I would slightly discourage other modders to take content from this mod to make their own mod and I DO NOT ENCOURAGE any other modders to discontinue their own work on any Boshin War mods due to the existence of this mod.

NOW WITH ALL THAT SAID AND DONE :)

Rising Sun is a mod based on the wonderful and much loved Gekokujo mod by marty4286 and uses much of its original content so 100% credit should be given to him for all of the content not added by this mod. Think of this mod as a sort of unofficial free dlc or expansion to the main module, a sub-mod. The mod is set during the late Bakumatsu - Boshin War period in Japan where Pro-Imperial and Pro-Shogunate forces battled with some foreign support for control of Japan.

CONTENT:
This mod contains a large amount of content from other sources which I can't freely give away, but I listed them in content sources. The Gekokujo creator made his content free to use so I'll have the same sort of policy in his honour. Just give credit to me and all the original asset creators.

If you want to use my content and aren't sure if its alright just ask me or message me on anything I won't bite. ;)

Rising Sun now having been back on track for a while now thanks to great new content sources (mainly the Blood & Iron II OSP content) is once again making some proper progress. I have replaced 100% of the old content with only a few items having placeholder meshes which themselves could actually become final.

At the moment I am still finishing up actual content (meshes, textures, maps) especially uniforms for more minor factions, but once that is done I can move on to the fun task of making all the troops redoing factions which will take some time, but not as long as the content. So pretty much what this means is I'm near completing the content and I'll soon move on to putting all together so this mod is one step closer to releasing.

While I'm working on this I thought it might be a good time to get any ideas from the community as you are the ones who will be playing the mod. Any ideas or information you have about the Boshin War that you want in the mod feel free to comment, however there is no guarantee that I will be able to include any of it at all so just be aware that 0% of this could be in the mod.

Also if you have any useful information about the Boshin War (Make sure its Boshin War not Satsuma Rebellion) you think isn't included or could be represented in the mod feel free to comment as well, just make sure you know what you are talking about not that anything bad will happen it just probably won't get in the mod. This includes information about uniforms or armies for clans and domains or even names of commanders from certain clans or domains which would be helpful in renaming the current Sengoku period lords. Please don't feel obliged to do this, but if its knowledge you already know or it's no trouble it would be helpful to just comment this stuff or message me just know that you would be getting nothing in return besides a chance of this information being put in the mod :) 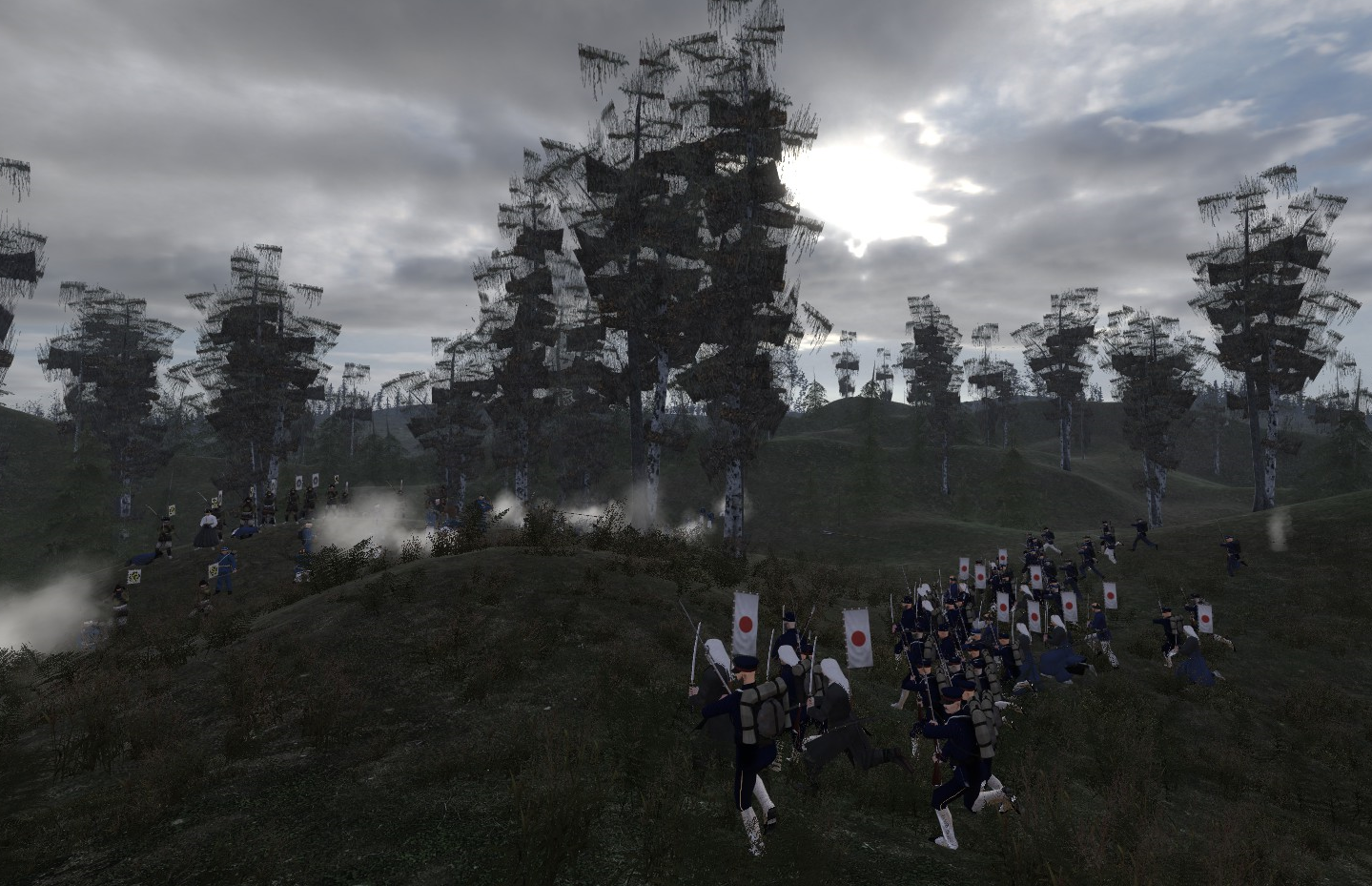 More information from previous articles below:

Originally I created this mod for myself because no Boshin War mods existed for Mount & Blade Warband and I was keen to blast away Samurai with revolvers and rapid firing rifles, but as the topic has proven popular and since the idea worked well I have decided to release its existence to the public.

However because I created it for myself I had only focused on the Satsuma, Choshu, Tosa Domains and only recently the Shogunate forces and there is much work to be done creating troops, npcs and factions. Almost all of the lords and knights need to be redone and many of the factions need to be remade.

If you have any ideas or feedback (negative or positive) of the modification be sure to comment it or get it out there I will almost definitely read it.

No doubt some of you may worry that this project will die and there will never be a Boshin War mod for Mount & Blade: Warband, but fear not. Most likely I will continue work on this mod until at least a proper Boshin War experience is attained.

However in the event I don't I will release whatever exists as Rising Sun for the community to access and perhaps continue if they so desire however at the moment it is unlikely that will happen.

Plans for the Future (at the moment)

I plan for this mod to have fully completed factions and troops for a proper Boshin War experience. At the moment this mod is Singleplayer only however in the future it is possible for Multiplayer to be added. I attempt to stay realistic in the goals of this mod and not try and do something outlandish yet like promise to add a Gatling Gun or you know, Korea or the entire Qing China Mainland as a faction. I aim for this mod to simulate in some way 1860s tactics and the Bakumatsu warfare. Naval battles may become a possibility, but at the moment I have no idea.

I plan to update this as much as possible as I know how painful it is to wait months between news and updates for a mod so no worries there.

So thats is...... Thanks for all your support and have a good one boys and girls :)

Rising Sun back in business + Future

An outline of the plans for the future and news about the recent drama.

An outline of the development of the Rising Sun mod including its past, the plans for the future and news about a possible Pre Alpha release.

After 257 days of waiting its finally here... The first full release of Rising Sun Bakumatsu

A patch for all the really terrible bugs that have been found and general bad things. Unfortunately no troop trees yet.

UPDATE: now changes some music to FOTS music to have that modern feel. Put it in Rising sun>music.

Includes an in-game Troop Tree Viewer and some bug fixes. Install AFTER patch 1.1.

If you're still working on the mod, I'd love for there to be a static wars option. I've found that the satcho-alliance factions tend to declare on each other rather than the shogunate factions. When a new game is started, it's usually as it should be, but it quite quickly becomes an ordeal where a faction no matter which side they supported, ends up declaring war on whichever faction's closest to them

There is a little update to this mod at the Nexus Mods. Its called "Rising Sun Winter Edition 1867". '

That update unfortunately has a broken morale system. The troops keeps deserting and the morale keeps getting low, no matter how many battles you win or how many castles you take or how much food you have. Thats very tragic. I played around over 100 days in the game, and the morale problem starts.

Hey there. First of all, i find myself the same problem but....i realized that i have too rest my troops for a while in towns. It takes awhile too gain morale.

Sorry for my bad english hehe

This mod is great and all but I have one problem though. Whenever I attack any party (all siege, land, and ship battle) with Satsuma infantrymen on their ranks, the game suddenly crashes. I hope the developers of this mod look into this error and fix it, otherwise I wouldn't be able to finish my conquest :<

Do you also have problems with the morale of your troops?

Hey there. First of all, i find myself the same problem but....i realized that i have too rest my troops for a while in towns. It takes awhile too gain morale.

Sorry for my bad english hehe

RIP to this mod. I hoped it would get updated at some point.

I'm so happy that this mod finally has a release! Finally, a Boshin War mod for M&B Warband! I love this time period so much. EDIT: Review below is based on the unofficial 1.2 patch -I'm playing with the Satsuma domain for the most part, and I still notice "Trained Imperial Infantry" spawning without any weapons, so they just run at the enemy swinging their fists. Also, some Imperial infantry still sometimes spawn without pants. I looked at the troop trees and they've improved for the most part…