RSS Rise of the Reds Release: A New Beginning

Hello Comrades! You have all waited for this for a long time and perhaps longer than we should have let you wait but all of that won't matter right now because we are finally done with our new release! There isn't much to say really, we have a lot of goodies prepared for all of you including new fluff, a trailer and of course the releases itself. 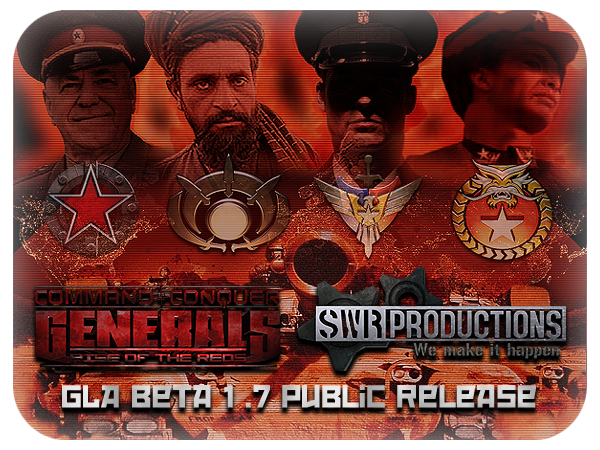 Hello Comrades! You have all waited for this for a long time and perhaps longer than we should have let you wait but all of that won't matter right now because we are finally done with our new release!
There isn't much to say really, we have a lot of goodies prepared for all of you including new fluff, a trailer and of course the releases itself.
Anyway, I will stop blabbering now and let you all have a look at the good stuff

Version 1.7 includes a wide range of features and additions, including...

North Africa, 2028
A large crowd stood waiting at the airport of Tripoli on what would otherwise have been an ordinary Monday morning. But this day was going to be different: While Chinese forces pacified the last pockets of GLA resistance in the ruined cities of Central Europe and the atomic mushroom cloud above downtown Hamburg slowly dissipated, the local populace had gathered in thousands to welcome the legendary heroes who made this vision a reality. A frenetical chorus of jubilations greeted General Mohmar 'Deathstrike' as he and his lieutenant Anwar Sulaymaan stepped out of the stolen European plane that evacuated them from the dying continent in the closing hours of the great insurrection. The Libyan government, along with most of north Africa, had been firmly in support of the GLA for years; what Western analysts initially lauded as an uprising for democracy at the start of the 21st century was quickly marred by corruption, infighting and stagnation. A few years down the line, the masses would once again flood the streets and revolt, but this time, under the banner of what was now known as the Global Liberation Army. 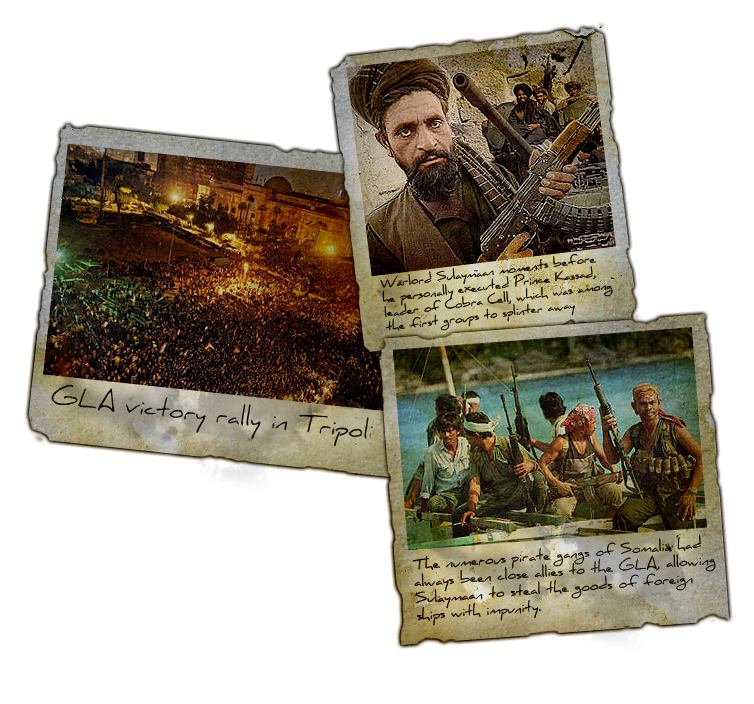 But after decades of endless warfare across all of central Asia, the middle east, north Africa and Europe, Deathstrike, with his greatest feat finally accomplished, grew tired, his thirst for blood and glory finally quenched. In the next few years, younger, more ambitious leaders started scheming against him as cell after cell slowly broke away from the cause. Then, triumph finally gave way to tragedy when a cowardly assassin whose allegiance remains unknown to history till this very day, put an end to the life and legacy of Deathstrike. Without their glorious leader, the local warlords and tin-pot dictators quickly re-assumed control, turning the once mighty organisation into a mere shadow of its former self. But Anwar Sulaymaan, Deathstrike's most trusted aide and, according to himself and his loyal followers, his only legitimate successor, would not allow this heresy to go unpunished. With the US still in isolation, the Europeans in disarray and China complacently savouring its supposed 'victory', Sulaymaan's battle-hardened army swept across Africa, re-absorbing the break-away cells while wiping out anyone who opposed him. 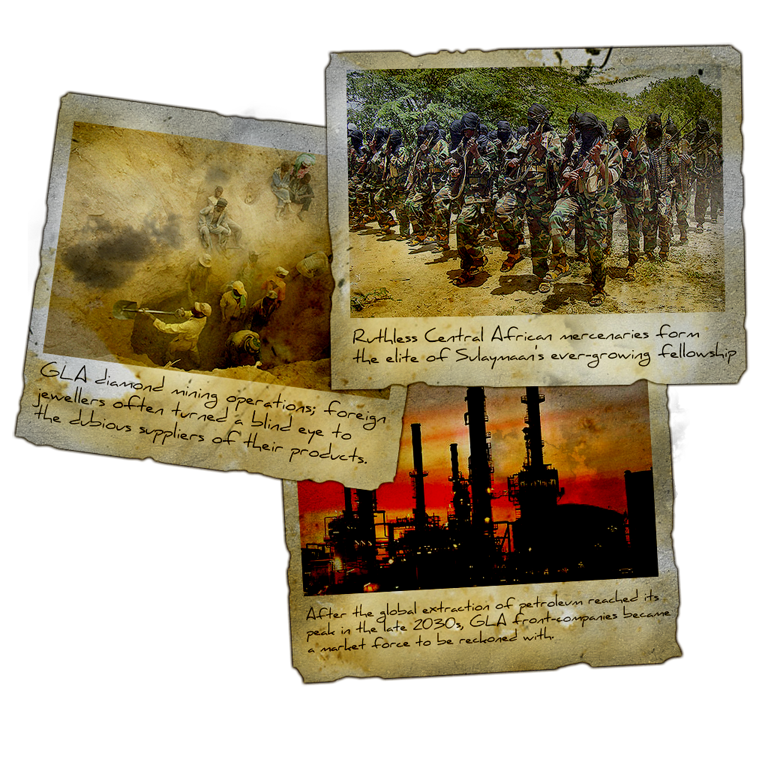 But his charismatic leadership and 'convincing methods' could only get him so far. To the chagrin of General Yusuuf, a Saudi cleric and leader of the GLA's most hardline religious wing, Sulaymaan managed to broaden the populist appeal of the organisation: Unlike Deathstrike's GLA which was centred around religious fundamentalism and an odd mix of pan-Turkic and -Arab nationalism, Sulaymaan's GLA would grow to accept every possible current of exploitable violence, ranging from freelance mercenary forces over disenfranchised African militaries to western anti-government anarchists. Financed through oil, drugs and diamonds, his numbers and influence grew larger, eventually surpassing those of the old GLA in the sense that for the first time in the organisation's history, the GLA was in a position to not just be mere guests in a country whose government tolerated them. Thus, Sulaymaan became obsessed with his personal dream of a 'warrior heaven on Earth', an idea which he soon turned into a bloody reality in central Africa. In his vision, the origin of humankind itself would become the first true GLA 'nation', a place solely dedicated to violence and the raw ferociousness of the human condition; a haven of total freedom for those who are strong enough to take it and a refuge for all who opposed the deceptions and hypocricies imposed on them by any scapegoat of their choosing, be it the West, the East, the rich, the elites, the 'man', the 'system', or the very concept of order itself. 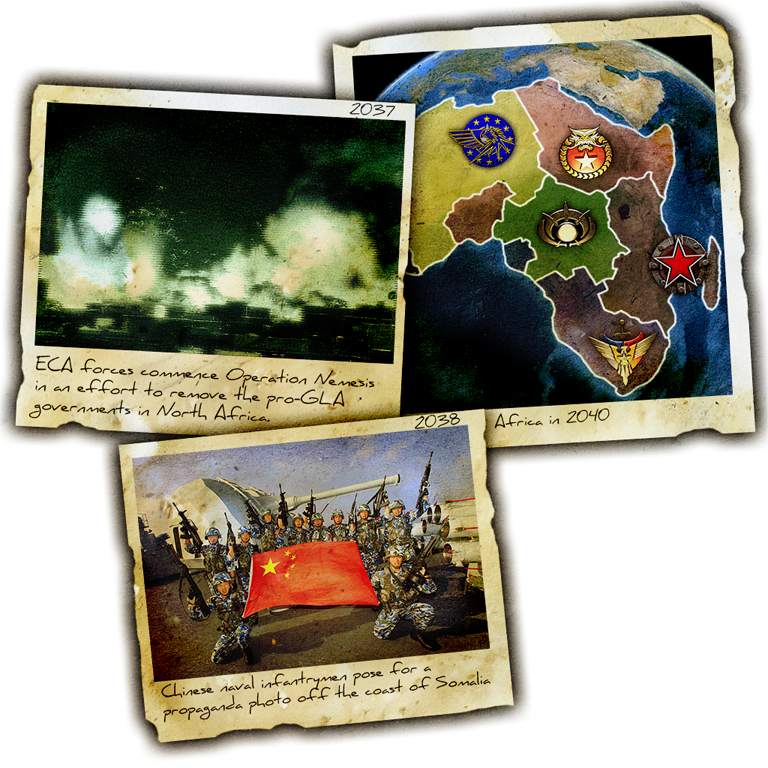 As Sulaymaan started building his empire, outside forces quickly arrived to challenge his vision: American corporatists bought their way into Africa to benefit from the continent's great resource boom while the Chinese put an end to the pirate nation of Somalia with a full-scale invasion and occupation. Meanwhile, the Europeans had re-built their countries and re-organised as what they now called the European Continental Alliance. Sulaymaan's north African allies were the first to suffer from their furious retaliation for the humiliation that he and Deathstrike had inflicted upon them and to the south, the up-and-coming Russian Federation had taken control of the lands, further destabilising the delicate balance of power between the global players. By 2040, the stage was set, the players in position...And Sulaymaan's warrior nation, now firmly established in the heart of the divided continent of Africa, was ready to prove its might!

So the guy in charge of GLA is an ominicidal maniac?

Has anything changed :p

Since when was the guy in charge of the GLA not Omnicidal?

They don't seem to be the very liberating sort, taking slaves and using extremely contagious, biological weapons on everyone that annoys them. :P

amazing story when Generals 2 is launched SWR team should start to make it available even there, because 3 faction are too plain with 5 factions and with the breathaking storyline this most be made to Generals 2 as well.

if there is a sdk for it.

EA has announced that Generals 2 will not support mods.

Dissapointing really, though understandable, frostbite 2 is still their little baby and they are not willing for all its secrets to be plucked apart in modding..

But you can't make a good game without mods, a game is for everyone.
The developer is never capable of making a perfect game. Only with the help of mods, a perfect game can be achieved.

I'll be downloading this after exams.

this is a great story

Why isn't there the Littlebird?

Temporarily replaced by cobra. Little bird will return after the generals are added.

You can enable it in the CommandSet.ini

We hope you'll take breaks otherwise TSRedux will have a delay of a month ;)

I am very happy!

Install it already then haha :P

YAY ME i live in EGYPT AKA< an area controlled by People's Republic of China > the good side : at least gona get good prices for anything made by china wait a sec everything is made by them :) YAY ME forever the bad side i am F***ed :D i cant tell them apart i mean no offence nice mod dude time to run

im gonna have to re-install Generals from TFD arnt I

I would have loved it even more if you gave the story a bigger emphasis on realism.

The idea of a "Warrior Nation" is immature. It seems like the idea was taken from LoTR or something else.

I really wold rather want to see a conspiracy going on,like in deus ex for example.

hello, i just downloaded rotr and every time i start my c&c zero hour it gives me a error message saying that i don't have direct x 8.1 installed. i started trying to mess with at and found the thingy to run in windowed mode which works, its just kinda small for my huge screen. this only started happening after in installed rotr. plz help. thx :)

Check your monitor driver in device manager
You can read the tutorial I have written on a similar problem (on my moddb page).

How did you make RotR run in windowed mode?

I think scorpion tank is a bit overpowered and crusader tank is too weak!

hey all,please anyone can help me?i want to play this game Rise of the Reds what should i do first?should i have generals ZH first ?