Hello everyone! It's that time of the year again! The ModDB Mod of the Year award nominations have officially begun just a few days ago! Last year we came in second for the Player's Choice awards, which was great and solely made possible by all you guys! If you like our mod and think we are deserving of your vote, than please do so and let's see if we can best that result this year.

Hello everyone!
It's that time of the year again! The ModDB Mod of the Year award nominations have officially begun just a few days ago!
Last year we came in second for the Player's Choice awards, which was great and solely made possible by all you guys!
If you like our mod and think we are deserving of your vote, than please do so and let's see if we can best that result this year.

Additionally, we have decided to go public with the testing of Version 1.87 so everyone can download and actively participate in testing.
More info can be found in the stickied topics on the forum here: Forums.swr-productions.com (please note that you require a registered and activated forum account and must be logged in to access this forum)

With all that being said, enjoy this weeks update with some cool goodies for the GLA: 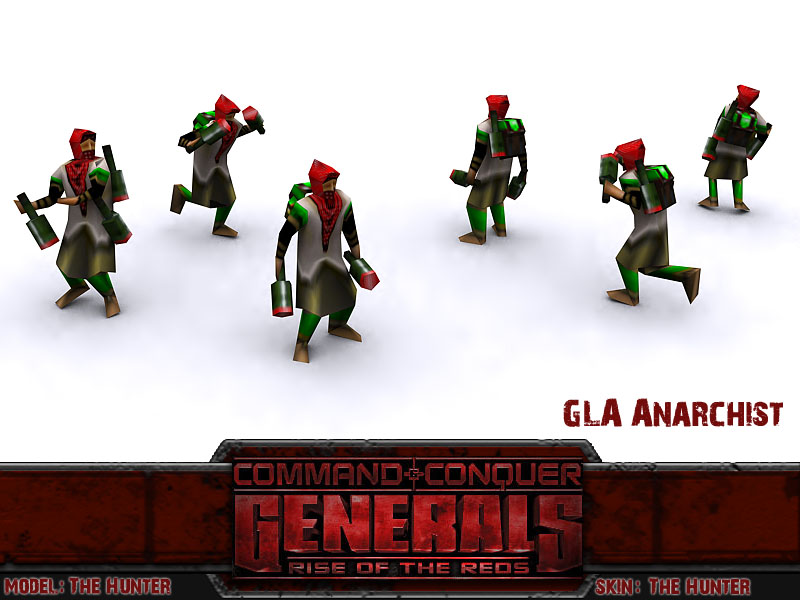 The combination of anti-globalist/capitalist political ideology and radical salafism has proven to be extremely effective in attracting disaffected recruits for the GLA from nations around the world. From the former come many of the organisation's demolition specialists, such as the 'Wall Street Bombers' whose series of attacks on banking houses and business individuals around the Manhattan Financial District in 2042 revealed that the reach of the Global Liberation Army once again extended to American shores. In combat, GLA-affiliated Anarchists tend to be armed with a variety of hand grenades and home-made explosive devices which they can set up for area-denial purposes. Unlike their religiously motivated Terrorist cousins, Anarchists are utterly devoted to their goal in ensuring that the world shall suffer "no gods, no masters" - A stark ideological contrast which, according to recent intelligence analyses, has led to disputes among the GLA's top level leadership. 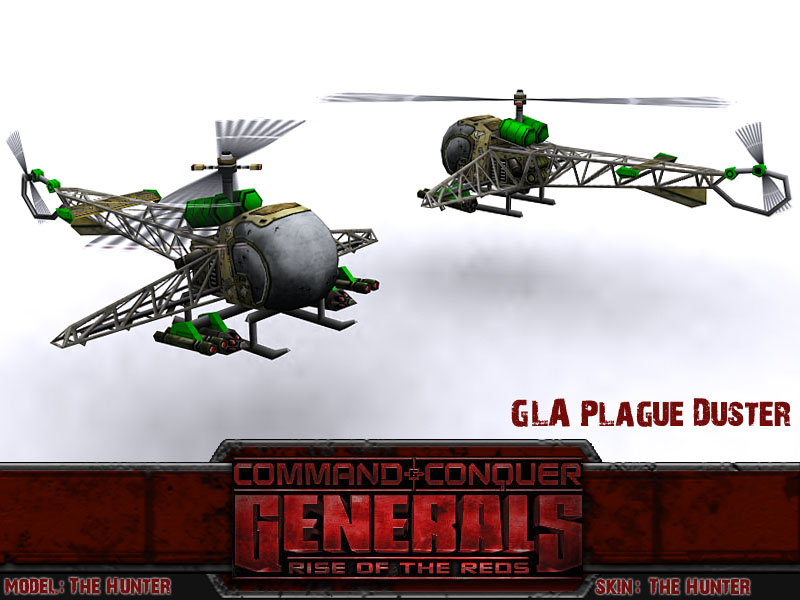 An archaic Bell 47 helicopter converted into a light gunship and chemical weapons dispersal platform. Despite the age of the airframes, these choppers prove to be effective in harsh environments due to their mechanical simplicity and ease of maintenance. Known as the infamous Plague Dusters, the GLA has outfitted their helicopters with anti-armor rockets, Stinger missiles as well as sprayer nozzles taken from crop duster aircraft. The sprayer nozzles are capable of dispersing weaponized Anthrax spores or other biological or chemical weaponry. As a result, the Plague Duster has become feared throughout Africa as a terror weapon designed to massacre entire populaces opposed to the GLA. Due to the helicopters' non-existent armor, the pilots are known to chew khat in order increase their reflexes and banish fear before going on missions. 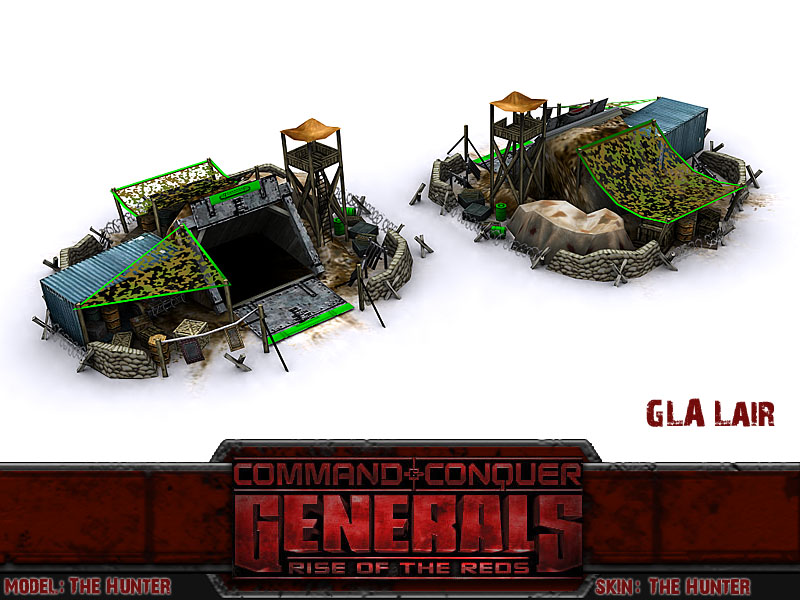 This fortified structure is intended as a more permanent upgrade to the GLA Sneak Attack tunnel (and replaces all prior advanced variants in game). The GLA Lair is capable of requisitioning Workers and other basic GLA units for deployment onto the battlefield.

And a friendly reminder that this upcoming Sunday, we will be doing another official live stream of the newly released public build.
The stream will as usually be hosted by Hecthor Doomhammer on his channel: Twitch.tv 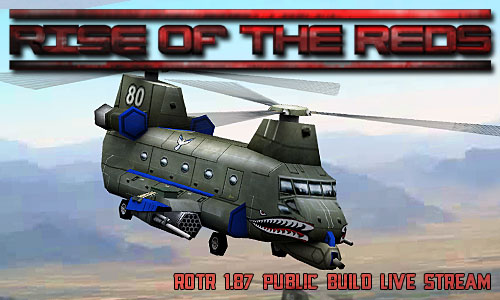 My first impression about the new AI is based upon first encounter with the Russian one:
-Much less base sitting, so less lag;
-actively uses abilities (hello Goliath!);
-throws a MIRV in the face (finally!);
-backdoor VDV is definetely not what i expected from AI on medium.
If that is what Russian one does, then i fear of what ECA one is capable of. Mizo - you are a wizzard! You definetely move in the right direction with the AI.

Thank you very much for the kind words. Glad you like it ^^

I WANT TO PLAY IT... But... My GPU died a few weeks back, and even before that my pc stopped running generals compleatly...

excuse me for being an idiot, but how do I get these patches? If they are not available or in plain sight, I already know I am one, please help ;-; would like to experience 1.87.

There's a link in the newspost which will lead you to the appropriate ROTR forum. It requires registration on said forum though.

Hmm, I tried using pretty much all my emails apart from personal gmail one, none get accepted. What the heck?!

Nevermind, got it. Still, wow, your email filtering is pretty draconian if it only accepts gmail.

Well i reammy glad this coming update. I hope the AI will be good as a Human player.

Try the open Beta and make yourself an opinion then :)

I have an issue when I play with european faction only in skirmish, lets say 6/8 plays attempt with european faction, the audio and GUI will will stay but the map and units will become black , like I will manage to select units (with energy bar and highlight) but all will become black after 3-5 min of play) this said, usually if I move the camera, lower on the map it wll all come back but once I go back near the command center, the screen will again turn black, keeping the audio....only occurring with the ECA faction, all the others are amazing (awesome textures and animation for your russian faction and awesome job on revamping the GLA)

Go to the forums and go to the Public Beta section. And, as I am a really nice guy, here's a link:
Forums.swr-productions.com

what a nice guy

GLA deploys Grad, what about the USA deploying MLRS, again?

USA is all about precision strikes. A MLRS doesn't go very well in that role.

@MaelstromX103 Yes! But, Tomahawk missile is not land-based weapon.

So what? We are taking inspiration of existing stuff. Realism is not a priority.
Most of the team know that the Tomahawk is a naval-based weapon. And nobody cares. It looks cool, so it's in the game. Period.

USA TANKS:
the USA faction should deploy M1 Abrams tank like in a previous patch(5.0 or something, idk) instead of... Crusader tank.

USA ARTILLERY:
Tomahawk should be if not replaced then backed up with
MGM-140 ATACMS missile (which is also btw a bit newer than Tomahawk) which could be launched from (older) M270 Multiple Launch Rocket System or (newer) M142 High Mobility Artillery Rocket System (HIMARS).

Tomahawk produce circular error probable (CEP) of about 10 meters, whilst
MGM-140 ATACMS missile produce CEP of between 10 m and 50 m.

Is it confirmed that you guys will make generals return in 2.0? if so will they be vanilla AND Shockwave generals? or will just new generals?

No shockwave generals at all.
Like forget about it because its impossible.
No vanilla factions either.

Hey, is this version mac compatible?

where is the beta section??

Hey guy who made this mode ROR 1.87 patch really freaking cool it can really turn in too a long fight with AI

i think this is the best C&C mode, and Shock is yours too right bad *** mod.

everyone, can you help me ? i want to download this is patch but i can't register, please shared patch already download to me, help me please.. i want play this is game

I cant verify my account even i put the User ID and Validation key correctly in activation form and there will be a message saying "Sorry, that member does not have to validate their account. Please double check the data you entered. If this validation isn't recent, it's possible your old account has been removed." thank you in advance

Dear from where i can download this update? Please guide.