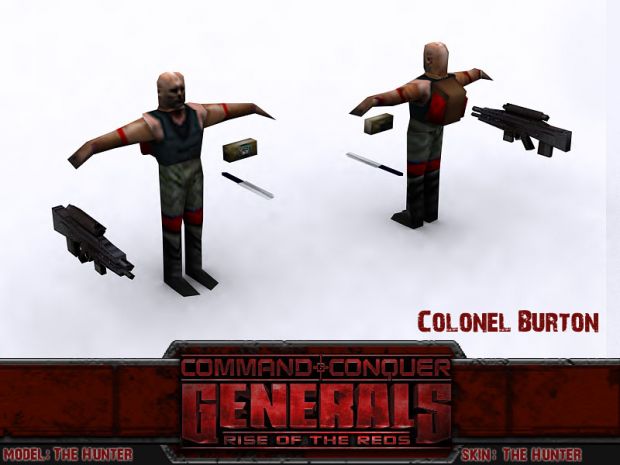 iv got a present for ya!

"That was left handed!"

hes getting a little old now!

Well... After all - he is a Colonel... :p
Anyway, this is a very good varaint of the unused Colonel Burton model version from Zero-Hour.

Well ZH was 2013 i think (need to check that) and the africa campian was in 2029 and i think the euorpe campain is 5-6 years after that so its now 2035 (ruffly) and the colonel been here all this time. I dont now how old he was in ZH but now he must be getting at the very end of he active duty.

Oh come on guys! In "The Rock" Movie, that SAS agent Manson is more than 50 and he's still kicking those marines' *****. It's normal when Colonel Burton still gets the job done.

His head is bold, very bold

Col. Burton is indead getting old lol i think he should rank up by now Gen. Burton and get his own faction XD but anywho nice work on this mod i been following for a while now :D... btw would the Col. Burton in ROTR have new abilitys just curious and also i love to use black lotus how ever because of her lack of offencive capabilities :| i just most of the time forget 2 use her unless i wan 2 just mess with my enemy's head. just an idea could she be armed with defensive coutermesures like stun grenades or somthing nothing letal but somthing that can atleast help out against infantry :D thanks and keep up the good work

looks like he is wearing a sack over his head.
i dont think he is getting old, maybe col. burton is a name designation.
like code named col.burton

I think Col. Burton is stupid. He does not ware a helmet. Silly, silly...

I think a helmet will not save your life when a Gattling is shooting at you...

Burton rocks! They should give him a semtex crossbow (CODBO)

Youtube.com This is what Burton needs. Not some lame crossbow.

yeah now were talkin a better graphics version of his oicw nice job!

Colonel Burton has been involved in every major conflict of this war and lived to tell about it despite staggering odds. This man has justly earned his ‘one man army’ nickname. In appreciation to his efforts, Burton now comes armed with his OICW kit by default. Allowing him to be at his full performance from the start; wreaking havoc behind enemy lines and confusing the enemy.

Colonel Burton will always been known for being the man that can get the job done. Not much is known about Colonel Burton besides the fame he earned in war. Truth be told however, as he says so himself, you wanted the best so there he stands ready to make the lives of your enemies a living hell.