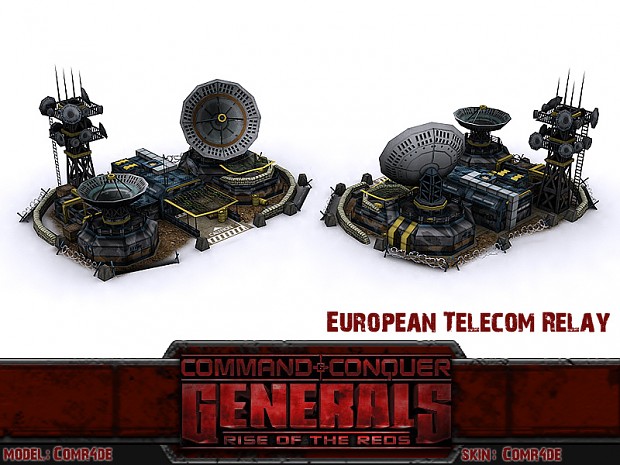 What 's this? Small super weapons?

no super weapon, but looks like a little bit

I wonder if there is any unit that can be recruited from this building?

would be kinda cool to see reporters recruited from here that when they accompany your men into combat produce money whenever you kill an enemy. You know like a good rating :P

And he should have big visualrange and allies in a area around him will have bigger weapon range.

this has been done in conflict zone

It attacks you with Teletubbies. It's super effective!

Established in 2032, the European Communications Agency Network (ECAN) was formed as one of the first cooperative institutions of the new European community and assumed operations two years prior to the formal creation of the Continental Alliance itself. Initially, ECAN was conceived as a joint initiative of several semi-nationalised telecommunications companies, news agencies and public broadcasting services and offers a wide range of entertainment, documentary and news programmes on television, radio and the internet. As a reaction to the rampant, dehumanising sensationalism of the past, the new European media corporations are obliged to follow a strict set of ethical guidelines backed by national laws against deceptive advertising, dubious 'reality' formats and smear campaigns. In a world where many news services are heavily affected by corporate interests or propagandistic posturing, ECAN News, with its popular anchorman Eric Brice, is regarded as one of the more impartial and level-headed programmes. However, if there is one thing that ECAN could potentially be accused of, it would be its rather amicable relation with the European military task force: Ever since the invasion of North Africa in 2037, the Continental Army works in close cooperation with ECAN's war correspondents who operate from within the Telecom Relay in order to provide the European public with a close insight into the operations while the military may benefit from an additional source of income generated by the ratings. Beyond that, the Telecom Relay also offers access to Europe's extensive satellite network, allowing ECA forces to take a clear look at their entire area of operations for short periods of time.