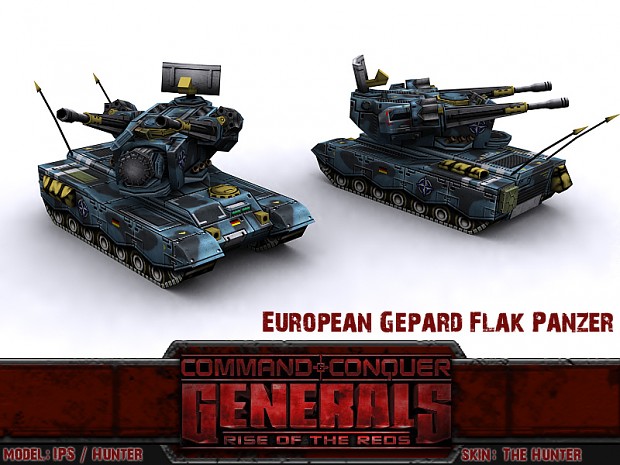 hey guys, look at the machinegun...

Yeah, we apologise for that little clipping error. We've actually posted a corrected render on the forums, so whoever uploaded this here must have grabbed the obsolete image.

I've seen some of those babies in real before....never thought that they could be more epic^^

With the initial mission of NATO first rendered absurd, then obsolete in the wake of the 2028 GLA insurrection, many European armies once again changed their operational doctrines back to a heavier, more localised Cold War era home defence mindset. As a result, the German Army decided to re-introduce the trusted Gepard Flakpanzer, whose most recent model was updated with the same fire-control radar and 35mm anti-aircraft gun used by the Sky Shield system, including the highly effective 'Birdshot' fragmentation round. This allows the Gepard to engage both air and soft ground targets and achieve effective results despite its slower rate of fire, an issue that can be mitigated via the installation of the new Revolverkanone 35 autocannon. In order to protect itself from infantry units that somehow make it past the two massive guns, the Gepard is also equipped with the same close area defence fragmentation grenades as the Leopard which proved to be an effective repellant against the suicide bombers of the GLA in North Africa.