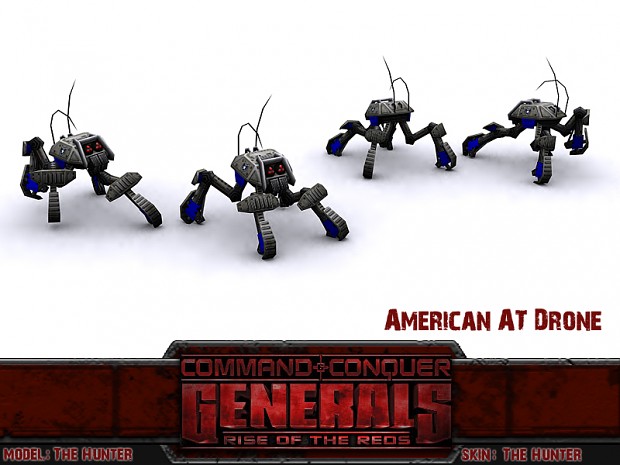 Imaging this thing crawling up your stairs towards you in the middle of the night...

... and that shotgun next to your bedstand ain't gonna be worth any protection against it...

...neither the baseball bat...

...you carefully eye the mini-nuke launcher stashed under you right shoe...

oh good one i remember that :D

"High speed, low drag!" Tell that to the Prism Tank of Red Alert 2.

At first, I thought it was gonna go "BOOOOOM!"
Oh, how could I be so naive and optimistic.
Ra2-like logic or just a really close range weapon that does slicesies?

Also: Found the concept, movement animation based on the cheetah bot?
Also: It's about time.

Scratch that bit, I managed to misunderstand the different leg designs.
Joy. :D

it actually was initially, in a way ; )

the new drones will be product by drone assembly playnt all new drones??

Well considering the new units are robotic "drones" i would take a guess and say yes it makes sence it will be built at the drone assembly plant. And i don't think they will all fit in the vehicles tab :P

"These monsters will run up to a tank and proceed to cut it apart"
Basically,the USA got Terror Drones now? Interesting...can't wait to turn into pieces those Sentinels >:D

I can't handle the irony.

Youtube.com That's all I have to say...

That is one BADDAZ avatar pic you got there friend!

Using these things on Russian armour is going to be so delicious and ironic.

Question,
What happens when the drone faces infantry?

I Guess it will GRAPE'EM

I'm gonna go on a whim here and assume this unit will be recycling the Terror Drones audio from RA2 & RA3?

As a temporary sound, yes. But I've been pitching some ideas as to what it should and have for sounds. May make it myself as I've got some ideas to give it personality voice wise.

"the US military always had a policy that can be summed up in one clear, simple statement: High speed, low drag! Our response to these massive, super-heavy tanks comes in the form of the new AT Drone."

Ironically, the Terror drones from which these "anti-terror drones" are based on, come from the Soviets in Red Alert 2.

Irony was fully intended I assure you ;)

Damn, the irony is killing me with this. American Terror Drones haha. But seriously, this thing is going to rape infantry all day long with face value alone.

you can think of them as zerglings in a way :)

Er...just how good are they against infantry?

They're like attack dogs that also attack Tanks, though with tanks they'll just melee them to death.

Reminds me of the spider robot from Minority Report.

If you surrender now I promise amnesty to you and your men.


The nostalgic urge to play RA2 again is almost overwhelming.

So they shoot short range armour-piercing lazers from outside? Well, at least the Soviets still have the better model :)

Burn those Overlords Away ! Yay!

-Sentinel Crew on being visited by these guys

I think calling this the AT Drone is just not a good choice! It should have been simply been called the "T Drone", short for "Terror Drone"! Because one glance at this monster and you'll half the civilian population running for the hills, while the other half would be standing there ******* themselves!

Do note that you can also call this an Anti-Tank Drone (AT Drone) and not to mention this is AMERICA you're talkin' about, fighting the Terrorists of GLA on a regular basis.

"Have you ever watched one of those Chinese or Russian military parades where they roll out their giant, overcompensating Overlord or Sentinel tanks and wondered: What the hell kinda idiot builds something as insane as this? Those slow, sluggish steel monstrosities that plough through roads, demolish bridges and tear giant holes into the pockets of the average commie taxpayer. By comparison, the US military always had a policy that can be summed up in one clear, simple statement: High speed, low drag! Our response to these massive, super-heavy tanks comes in the form of the new AT Drone. Some call it the Redeye, others refer to it as the Alpha-Tango. I like to call it - The Anti-Terror Drone! The ATD is a revolutionary new anti-tank weapon that walks on four mechanical legs that let it run at a stable 70 miles per hour. That's faster than a Californian cougar and I'm not talking about the fortysomething kinda cougar that lives in fancy suburbs. These monsters will run up to a tank and proceed to cut it apart with a plasma torch that burns through steel at over 50.000 degrees. Now -that- is some serious nightmare fuel!"