This mod is being remade! Head over to Moddb.com to see all latest news.

It feels like it's the only thing you've ever done. Run. Ran. Fled.

But who could blame you?

It started with the flu, or some sort of strange cold. That shit doesn't matter now. What matters is the fact that zombies, and strange monsters, and god knows WHAT else are out there. Better yet, they're right behind you.

Kill them? Fat chance. The only gun you've seen in a good amount of time ran out of ammo hours ago, and that rusty old pipe in your hands doesn't look like any zombie killer you've ever seen.

Finally, you see something that looks safe. Its an old Inn, the kind you'd see on the side of the road while driving down an interstate. You seem to have traveled from the city a bit, and the door to the main building is open. As you draw closer, and closer, it shuts!

Suddenly, the entire situation seems ten times worse. From all around, zombies are swarming over you.

You bring the pipe up, and hope for the best. WHAM, one rotting bag of flesh falls to the ground as its skull is cracked, but the rest of them are on you in a heartbeat.

Resident Evil : Cold Blood has laid dormant for years, following turbulent internal times in the wake of beta 2 and a series of hardware failures leading to a presumed complete loss of development assets and the whole codebase. Folks went their separate ways, with key members of the team going on to release the acclaimed Afraid of Monsters DC and award-winning Cry of Fear

Half-Life turned 20. The Resident Evil series itself changed and evolved with the industry, culminating in some divisive titles and, as of recently, a return to horror form with Resident Evil 7 and the stellar Resident Evil 2: Remake.

Time has not been kind to RECB. As early as Vista the mod started running into troubles running, further compounded by the Steampipe release of Half-Life. Still, dedicated fans have kept the torch lit for over a decade, hosting scheduled events that help populate servers and keep the spirit of the mod going.

Cut to December, 2018. While on holiday break, members of the team met together under the Half-Life Creations discord. Recently, an old backup drive had been discovered holding a wealth of old development assets - including the Beta 2 codebase and work-in-progress versions of the maps in their source format. Immediately an effort was mode to move the mod onto the latest Half-Life SDK - allowing it to run without the need for compatibility tweaks and other workarounds.

With a stable base, years of tweaks and modifications were rolled into the mod. A new user interface was implemented with support for more health states and easier visibility on HD displays. Ironsights, glitchy and prone to latency issues in their implementation have been removed completely, opting instead for a world-based, customizable laser dot. AI tweaks and enhancements, complete spawn rebalanced for enemies and items - the scope of work needed became apparent quick - and with assistance from our amazing community we have made steady progress.

The main hurdle to clear before a public release is updating the existing maps - going back to work in progress maps over ten years old is a good challenge, with a big focus on making sure every level can be completed by a single player. The aforementioned re-balancing of enemy and item spawns has generally equaled out to 'less respawning monsters, more ammo' - with these changes being well received among the testing crew.

In the progress of testing, curiosity led us to running the mod under Sven Coop. Originally this was thought of as a nice alternative in case someone didn't have base Half-Life - but the advantages have grown apparent the further along development has proceeded. The engine level entity count boosts have proven helpful in running stubborn maps like the community scenario, thethirteenthbullet and has lead to a generally more stable mod. As always, we'd love to hear community input on this matter.

Now, the big question: When? I don't have a good answer - but for those who want to get back into Resident Evil: Cold Blood Right This Very Second, we've got you covered. Beta access can be found on our Discord hosted by Half-Life Creations. You can find more information here on our new forums.

This is a huge shoutout and thank you to our dedicated fans, I hope we're able to surprise you all more in the future. In the meantime, please enjoy this selection of media from our various playtest sessions: 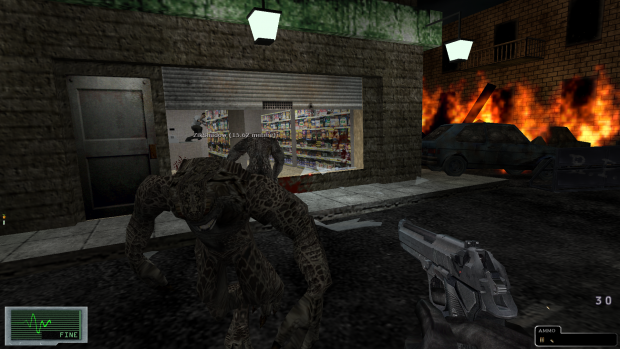 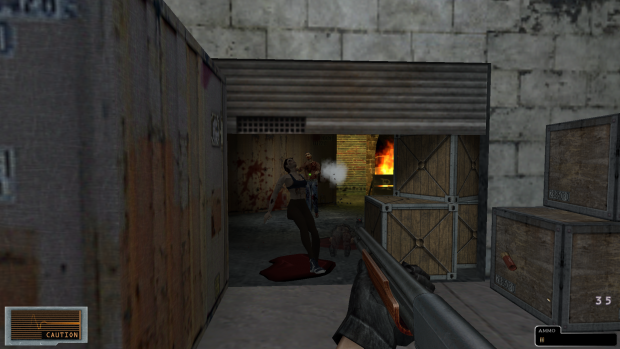 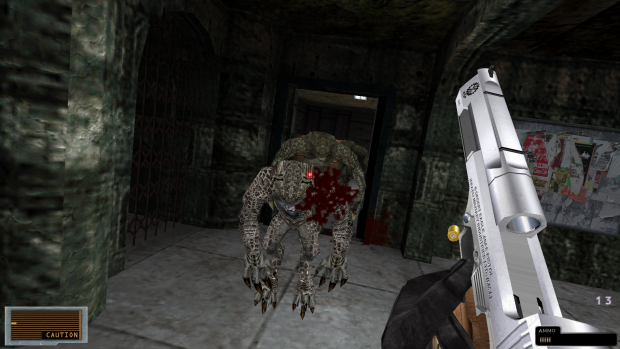 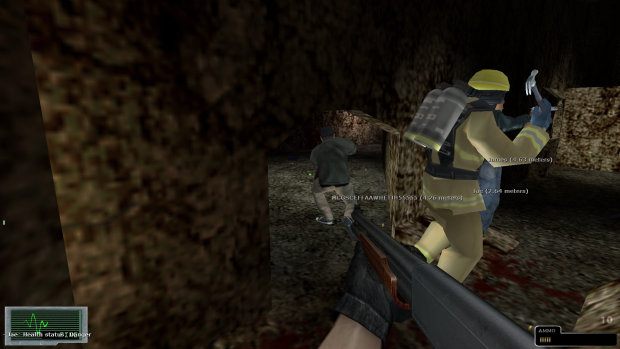 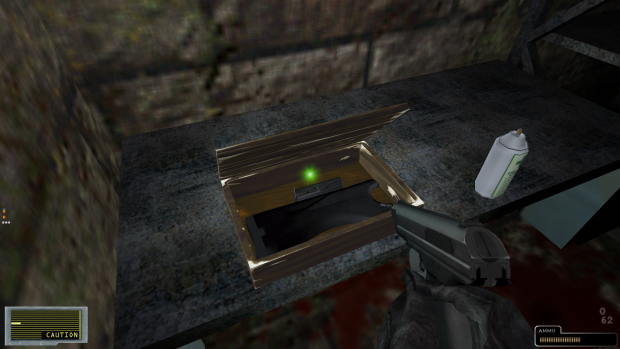 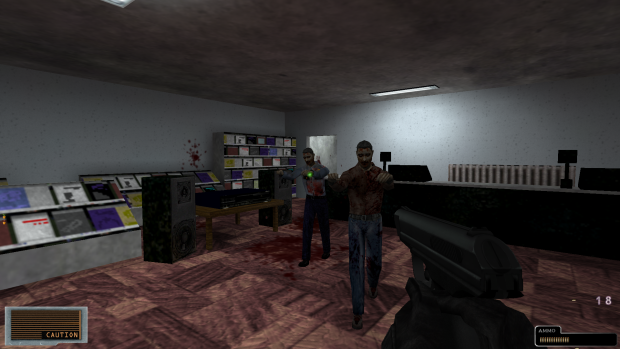 Are you a server operator tired of the game crashing, due to that damn "No Free Edicts" error? Well, you don't need to worry anymore! It's been fixed...

Morning, folks. We're pleased to inform you that after an unpleasant administrative error by somebody, the site is now back online with a cleaner redesign...

On-and-off Team Member and friend "Rayne" has recently been kind enough to make the Linux .so server file for the current version of RE:CB! This means...

We're pleased to announce the release of our .fgd for custom level creation in Resident Evil: Cold Blood - Beta 2.

This is the mapping .fgd file for creating custom maps for Resident Evil: Cold Blood Beta 2. A description of the new entities is contained inside the...

After a long damn time, RE:CB Beta 2 is released - Enjoy the mod!

Christopher McCaleb's personal handgun, passed down to him by his father from his time in 'Nam. A trophy from a fallen North Korean fighter...

A new set of animations for the Combat Knife in RE:CB - Beta 2. Some of you will notice that there's a new type of animation in there.

This is another quick showcase video showing off the zombies....err...vomitting. It also shows off a new monster as well as a new weapon, so enjoy!

This is a quick video demonstrating just one of many new features in Beta 2 of our mod. Resident Evil veterans should know what this is. =P Stay tuned...

I couldn't get this to work for the life of me. both steam anx xrehd failed the same when I tried to load a server or open any map. welp, that's my noon wasted.

Checking out the article from 2 years ago, the latest build is on their Discord server (link to get to it in the Article here). I ended up trying it out, apparently using Sven-coop to get it working well enough in the end.

Downloaded it from their discord and tried it out. It's not bad.

Hello! How do I run the R.E - Cold Blood Beta2 mod on Windows 10 Pro? I install the game and start, but it gives a strange error that freezes the screen when I'm loading the map to play. Help me please.

If you have crash, you need put in hl.exe compatibility mode with Windows 98/ME and apply changes. Type in YT: Resident Evil: Cold Blood 2020 Gameplay

are you sure it's okay to use the video of RE3 like that?

Hi guys! So there is an official Discord for this mod here. Discordapp.com

Otherwise if you are interested in other Gold Source (GoldSrc, HL1, Half Life 1) mods or Source (Half Life 2, HL2) mods then feel free to join a new discord that i've started for matchmaking. I'm trying to centralize and unite the multiplayer mod communities for all of the various multiplayer mods out there. Feel free to check us out. We play a mod of the week every Friday/Saturday.

Sorry for the silly question, but what if I, as a random mod player (Without experience in Q.A testings), wanted to give the new beta a spin?
Is the Discord server and current download only for proper testers or everyone who'd like to try it?
(For that matter, is the current new beta even in a playable state?)

I'd rather avoid joining a Discord group at random only to snag a file that isn't available on moddb (Perhaps for good reasons).

The latter. The Beta 3 built off of Beta 2 is very much playable and there's one or two servers, but it's obviously still a beta and still getting fixed up.

Finally tried it out.
Couldn't really find any servers, sadly :(

There should be. Just hit Ackart on the Discord.

It's a damn shames this mods' forgotten now and nobody playes it anymore.