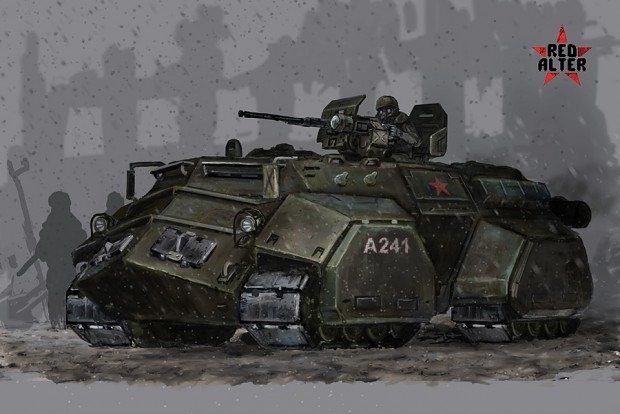 Epicness in its true form.

A large tower with a short tank gun and a quad machine guns will be given after receipt of the heroic rank (full rank for unit).

could you guys make a wallpaper of this one?
It's an Epic drawing in deed.

Wait some days, we remade this art in normal resolution )))

No problem for this I'll wait because it's just to awsome.

1.This is machine gun ? I think heavy APC should have atocannon or something
2. with one track by side it looks much better imho

Heavy refers to 'heavy armour'. Besides, no matter how heavy it is, it is still an Armoured Personnel Carrier. So I disagree with Autocannons and tank caterpillar tracks.

No it is more similar on Infantry fighting vehicle than Armoured Personnel Carrier.

I think I prefer this over the other one.

very nice! both the concept, and the illustration style

OMG OMG OMG......... :D
I really love this one, although the other APC with wheels is awesome too, this one with tracks SIMPLY ROCKS!!!

Front glacis reminds me of the post WWII IS tanks, excellent rendition of Soviet armour.

This soviet heavy APC BTR-66 has been developed for fights with mass application of the nuclear weapon and in the conditions of the superiority of the enemy anti-tank weapon, besides it is effective in city battles.

The given art represents the soviet APC in streets of an anonymous city in Northern Korea after nuclear bombardment after which there are radioactive rains and ashes.