"He who controls the past,
commands the future.

He who commands the future
conquers the past."

Origins is being created by Sourc[e]x, a Norwegian 3D generalist and long time game modder.

The mod started out merely as a personal scripting challenge to recreate the Red Alert/Tiberian Dawn sidebar system using the Galaxy Editor. One thing led to the other and now the mod is turning into a complete remake of one of my favorite games: Command & Conquer: Red Alert.

As I went further down the development, I decided to make Red Alert: Origins a reboot of "Project Red Alert\", a old and canceled Warcraft 3 map I started years ago, which I've been wanting to restart for some time now.
It was essentially the same thing; a semi-total conversion to turn the game into Red Alert.

The ultimate goal of Red Alert: Origins is for me to learn more about game logic and scripting and having a great time imitating and improving upon the gameplay of Westwood Studios' Red Alert.

Red Alert: Origins will have a open beta testing period to gather as much feedback as possible.
The opening date for the beta has not yet been decided.

It's 1946. Mankind has just gone through one of the most brutal wars it ever faced. At the Trinity site in New Mexico, in an attempt to prevent the war from ever taking place, Albert Einstein created the Chronosphere time machine. Traveling back to Landsberg, Germany, he met a young Adolf Hitler just after his release from Landsberg Prison. Following a brief conversation between the two, Einstein shakes Hitler's hand to cause a reaction that eliminated Hitler's existence from time by disturbing the space-time continuum. This prevented Nazi Germany from forming and averted World War II as we know it from taking place.

Without Nazi Germany to stand in the way of Joseph Stalin's ambitions of conquest, the USSR tries to form a Soviet Union stretching across the entire Eurasian landmass. In response, the nations of Europe form into the Alliance, and start a grim and desperate guerrilla war against the invading Soviet army.

And so, in spite of our dearest scientist's efforts, a new World War starts.

Red Alert: Origins now has its own official website and forum. This is something I quickly put together some days ago to make it easier for me to keep track of information. It's not much at the moment, but I will expand it as I go.

Let's see now... I haven't really done a whole lot in the art department this week, but at least it's more here than in the data section.
I've been working a little on the Game Settings menu to make it look more like the Red Alert main menu. 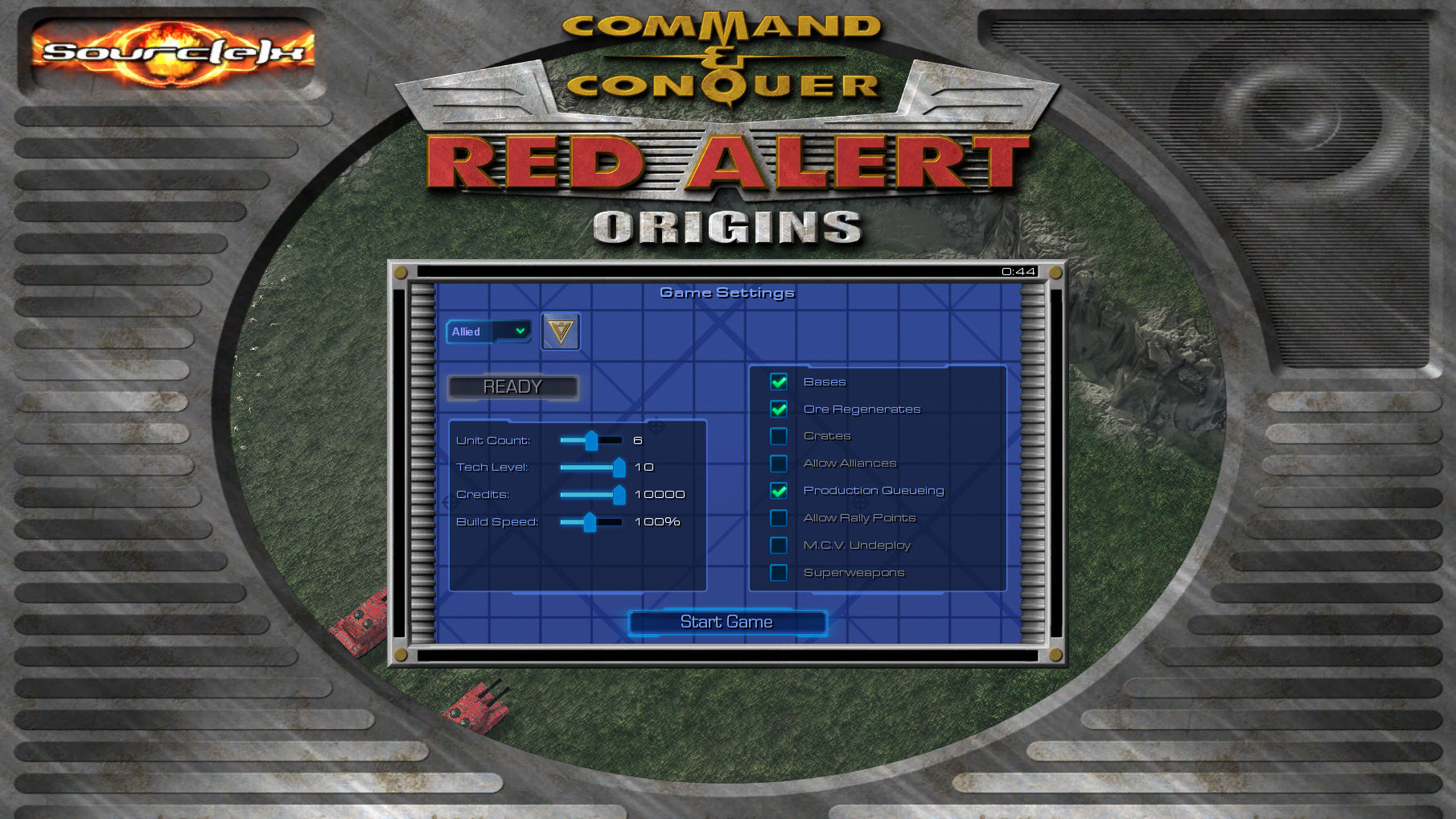 The first trailer for Red Alert: Origins is now live. This is something I've been working on as I've developed the mod, and as such contains a tasty salad of old and new footage. Enjoy.


Other than that I've been modeling the remaining aircraft models (Yak, Mig and Spyplane) and the ore mine doodad. There's also more structure birth animations and I've adjusting some of the old models geometry.

You should already have seen this.

This is where I've been spending most of my time lately, just working on the game's script. And it's actually coming together nicely if I may say so myself.
I have gone through a lot of the existing code and optimized it and fixed loads of little bugs, like some of the sidebar text could suddenly disappear out of existence and production queuing could display a wrong number. Stuff like that. 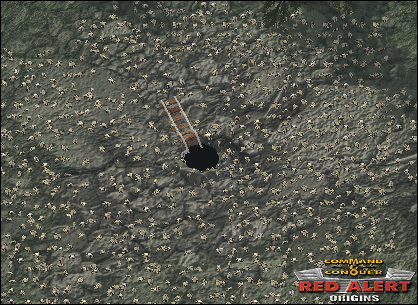 Not only have I created the ore mine, the ore is now regrowing by itself. With the addition of the MCV deploy mechanics, this means Red Alert: Origins is now basically playable. Event though a lot of stuff is still missing.
I've also improved the ore/gem harvesting mechanics. Before, the ore trucks would in some cases cease to harvest anything and just take a vacation to stare at the scenery. I haven't had a single issue with it after the update. :) 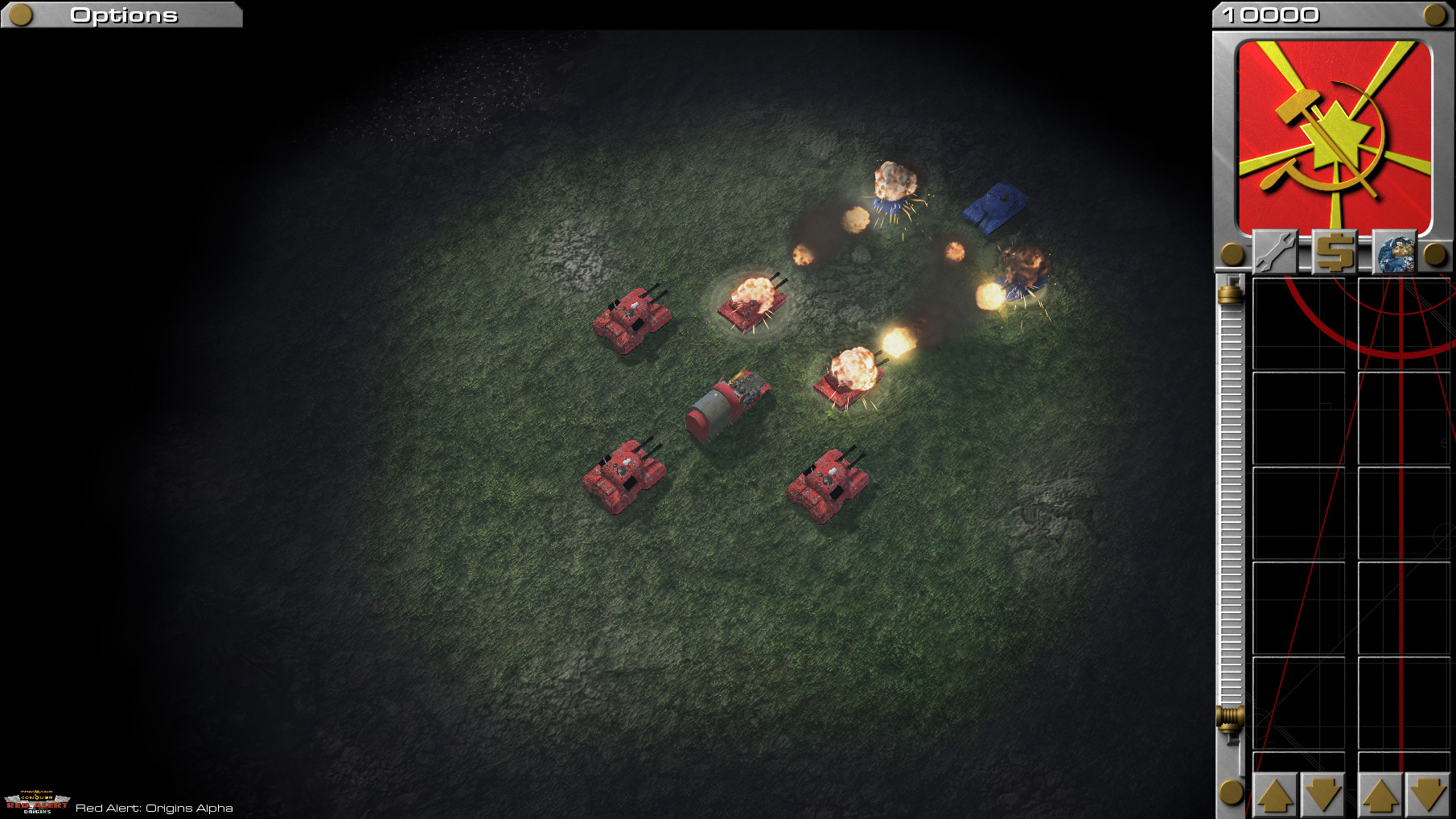 With the completion of the MCV deploy mechanics, a multiplayer game will now start with a MCV instead of a Construction Yard. And what do you know, you can even undeploy it if you've ticked the checkbox in the Game Settings.

This is a dynamic cursor system I've been working on. It finds out what situation the player is in and add a effect to the cursor accordingly. It's a rather a hacky solution creating a image underneath the mouse cursor. In its current state, the image is lagging a bit behind the cursor when moved and cannot be displayed on top of the UI.

I like to think of this as a temporary solution. I'm confident Blizzard will supply us with the ability to change the mouse cursor at runtime sometime in the future. This would get rid of all the problems I'm currently experiencing. If they don't, however, this will have to do.

Hardly touched the data editor this week. Yeah, I'll probably end up with all the data related stuff at the end.

That's all I've got for now. Keep checking back for more.
Also, it's my birthday today. Hurray. :P

A brief update on the current progress. A lot of artwork and scripting has been done.

Before the 5.0 update, making any kind of naval in SC2 was a huge drag. There was basically no way you could make naval in SC2 without having some kind of really unideal drawbacks, such as big performance hits or having very restricted water capabilities. I personally think this may have been the biggest drawback to the modder as Naval is such a big and important part of RA1. Hopefully now that SC2 can natively support pretty fine and fluid naval, they'll get some motivation to work on the mod again! :D

Is this mod dead in development? Just post anything or answer the comments!

Hey is this mod still alive?

I think the creator is just waiting until all the SC2 expansion are released. He said on the forum that he is waiting for Heart of Swarm, which released already, now Legacy of the Void is announced and will be released soon. Also I think he might be secretly building the mod without updating anything to avoid any lawsuits, which is a smart move if you are to avoid dealing with EA's ********.

A suggestion for this mod to the creator if you are reading this:
make this mod a crossover with all the C&C factions. I had been wanting to see a crossover in 3D for years. Forget about EA's rule of restricting models outside of their game, EA doesn't even deserve to be respected anymore for what they did to C&C, and I'm sure Blizzard won't mind, who knows, maybe Dustin Browder would even appreciate your work. Since he had a history with C&C.

Example:
I had been thinking of recreating the Traveler-59 Prodigy(from C&C3:KW) in SC2 and it would work flawlessly if I knew how to make maps. The model is obviously the Protoss Stalker, than you give it Nova's mind control(her version is controlling one at a time until relinquish control, sounds familiar?), make it able to control buildings. Then you give it the Infestor's Parasite and make it an AOE spell(controlling a unit for a limited time, with AOE, you can control a small group of units), keep the original Blink, and give it Mass Recall. Now we have a perfect reproduction of a C&C 3 unit.

You can also use the modified Nova mind control and make Yuri Prime.

Also make sure to put in all the good old C&C music, heh heh.

I think the Mod is dead.

so many damn concepts and ideas but no finished or even partly finished mods. they should be removed from the "Popular Mods" side bar if theres nothing to even try. how can it be popular if it has not been played? I suppose its the idea that is popular.