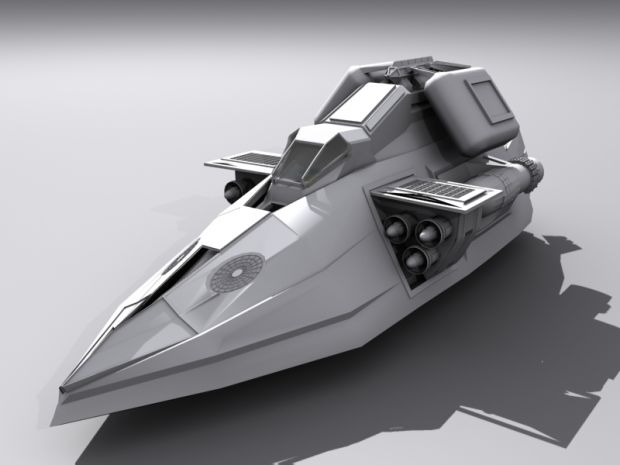 What kinda polycounts you pulling with these? It's an amazing model, but can it run in-game?

even I don't know how many polycounts are allowed in-game, this is just a concept. We'll adapt it later for in-game, if necessary.

Well, I can solve your polycount issue for you: recommended max is 3000.

You don't know that

a very good banana with probably high polly count, but a banana non the less...

I have no idea what to say about this but its somthing good.

Although it may look to be nothing more but another usual anti-infantry vehicle, players will often be tempted and will feel the need to have a good bunch of those lying around, either hunting infantry or ships. It also comes at a good cost, so there's no problem spending on them, you won't lose much investiment. As descripted, it's secondary mode is to submerge into water and launch a bit more torpedoes than the Riptide ACV, which will be a more useful firepower than just the twin autocannons from the primary mode, made for anti-infantry. However, it won't be much against the large-sized ships the Dreadnoughts and Shogun Battleships are, and it'll be very vulnerable against air strikes and other faction's subs, specially the Allied Submarine Hunter.