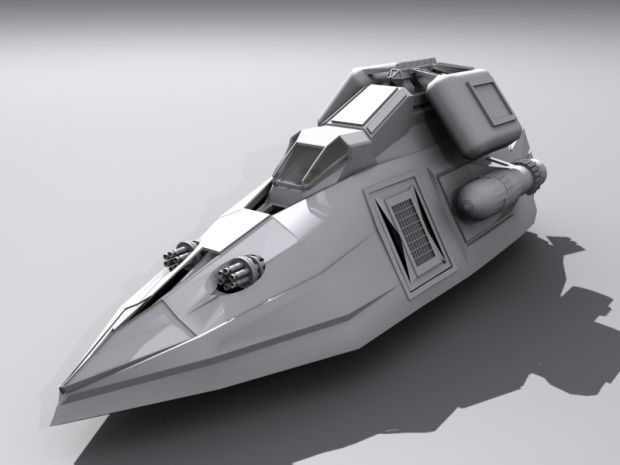 Somewhat heavier than the transport-capable Riptide ACV, the HAI-6 "Crawler" Hover Assault Vehicle, or ,simply, Hover Crawler, was projected for a more direct, offensive approach, eliminating any means of ground transportation through the use of this vehicle. Once used in the Pre-Forth Military for small purpose like law enforcement, light security and riot control, the Crawler passed through a series of modifications and re-designs, but all maintaining an apparent triangle shape and the purpose for a fast, well-armed and well-armored anti-infantry solution. The current version was developed as a response to the lack of preparation the Brazilian intelligence had in determining the enemy naval capacity, capable of decimating Forth ground attacks on the seas. To compensate for light naval forces, Nova Luna's scientific division, the S.E.S.A (Specialized Engineering and Science Association), adapted the Hover Crawler to be a mini-submarine, capable of launching torpedoes against naval forces. It was only thanks to this adaptation that the Crawler achieved great popularity on the field, with Forth commanders often using them for naval assault, infantry hunters and skirmishers.