A mod for Yuri's Revenge that reverses the roles of every original Red Alert 2 mission to play as the other side. In some cases, this is a direct reverse of the scenario, and in others it follows or precedes the original mission in the timeline. 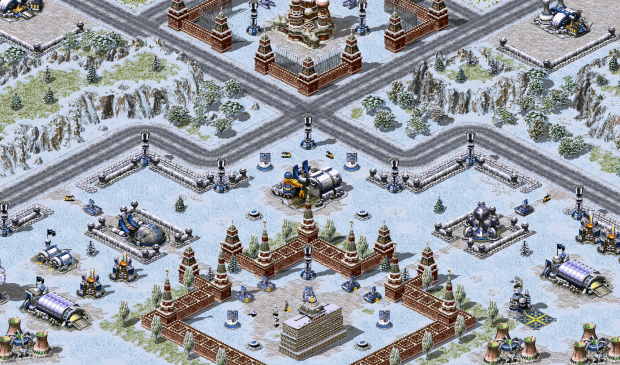 I honestly don't understand why Tanya is still on the scene. I mean,there's no way that this Entire base can be built a few moments after the Allies captured Romanov.

Nuclear reactors are still there and ready for removing by sending them into Dinosaurs time to support Yuri who is trapped in Time Machine...
ow I forgot I am not longer playing allied side. Okay, just 2000$ ago: Kirov reporting!

"With a final desperate use of their Chronosphere, Allied forces catch the Russians off-guard and capture Moscow. Premier Romanov is held hostage. Boris sneaks a small covert team into the city to recover Romanov, then punish the Allies; without Romanov to bargain with, they will have nowhere left to run."

And that's it, the Soviet campaign previews are all done. There's still some work to be done, but we expect to be releasing these 24 missions (plus a few alternate scenarios as a bonus) before the year is out.