This is the official "Realistic Driving" mod for GTA V. This mod features completely new driving physics, created from scratch for each of the 357 vehicles. The performance of each vehicle matches its real life counterpart perfectly.

Realistic Driving mod version 1.1 features new driving physics for 257 vehicles in GTA V. Physics definitions for each individual vehicle have been created from scratch. Tire grip and basic handling characteristics for each vehicle are as realistic as possible within the limitations of GTA V physics and AI. Each car's performance (acceleration curve, top speed, braking, cornering) matches its real life counterpart with high accuracy (deviation is less than 3% in most cases) ===== What's new in version 1.1: This update improves suspension of all cars and bikes (more vivid/reactive suspension), improves offroad handling while speeding and adds 17 new cars from the 'Executives' and "XMAS3' DLCs. 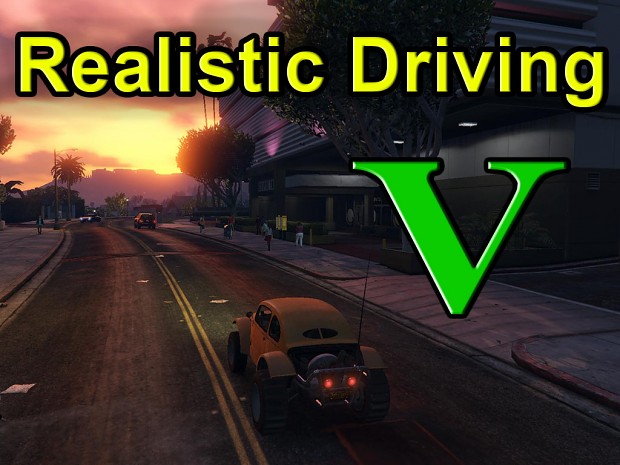 Good work!! ;)
but a question, have you plans to add the other vanilla vehicles like trucks, buses...etc.
????

After playing with this mod, you cannot go back - GTA V is utterly unplayable without it.

The stock handling just sucks all the fun out of the game - R* have crowned their masterpiece with a turd of a handling.cfg, and this, here, is the patch for that bug.

You NEED this mod. Install it NOW.

For some more objective feedback; the motorcycles still feel horrible, with bizarre tyre squeal and lack of steering response - the closest thing i've experienced in real life was having to let almost all of the air out of both tyres in order to get home on really slippery snow. But even that wasn't as bad as some of the bikes here...

Eventually i'll have to get round to modding the bikes myself, but for now i've no interest in using them with the disorienting camera tilt when leaning. R* really dropped the ball on that one..

For cars though, this is the shiznit. Only downside is that the AI rely to a large extent on the lame R* physics, so with this mod enabled they'll overcook sharp turns when racing (a braking value of around 2 seems the best compromise between realism and AI racing ability, but there's no perfect fix unless the AI is improved).

Additionally i prefer a deformation multiplier of around 2, and around 9 for engine damage... but these are easy enough to tweak.

Another feature you may consider is limiting the car speeds as a function of power vs drag - so instead of hard-limiting the top speed to, say, 260 kmh, set that field to 999 (basically unlimited), and then tune the power and drag so that the 260 kmh limit emerges naturally.. then it'll also vary naturally with windspeed, gradient etc. - so you might hit 275 kmh downhill with the wind behind you, but only 250 kmh in the other direction, type stuff. I've tried this in previous GTA's with good results..

But enough inane suggestions; this mod is a must-have. You will honestly have no clue how disappointing the stock GTA V handling is until you've tried this fix.. it's a giddying delight to be finally DRIVING these fantastic cars instead of just mashing controller buttons.

I love this mod! Hands down the best mod for gta v! Keep making this mod better and better!

Great acceleration and braking accuracy. seriously it is spot on. BUT the front end grip and turn in (under braking and neutral chassis balance levels are totally off). it feels like every car has 125 winter tires in the front! my Focus st can take 90 degree turns at least 15 mph faster than the way the super cars are set up! I have looked in to correcting this, but it is difficult. the way rockstar implemented cars handling based on drive wheels, power, brake balance and steering angle (but not tire/suspension physics makes it impossible for these cars handle realistically. that being said it seems better to over power the cars and be able to steer with throttle than to not be able to steer at all (like this mod does). bottom line the mod is good, but i need serious improvements to be called "realistic".
- Sincerely,
a VIR spec e30 record holder

The cars understeer so badly, because the full lock happens in something like 0.2 sec, so the physics are actually very realistic, If you would try in real life to go full lock in 0.2sec at say 60mph You would understeer as badly as it happens in game. The solution, when playing on keyboard is to make small adjustments with "A" and "D", instead of just pressing keys continuously.

Exactly. The game reaches max steering in 0.200 seconds, which is very bad for keyboard drivers. Last month i started experimenting with slightly less realistic tire settings in order to reduce problems caused by the game's steering input. Cars are less "understeery" with the new tire settings and more fun at lower speeds but a complete rework of every single car would take 110+ hours of work. Not sure if i will ever finish that rework.

doubling the suspension force and using the model flags adds to the realism. seems like R* only really used the right axle flags in VC, but they do work, and the AI seems to perform better with the flags set properly in gta v.going over ur mod I seen the flags for the majority of the vehicles were set to torsion axel witch is wrong.

Stumbled upon something that might be of interest to you. A file called "vehicleaihandlinginfo.meta" located in the data/ai folder. common.rpf file. this may help you with getting the ai to work with your handling. this file pretty much covers all the ai driving types and focuses on the speed and angle as well as the min/max braking distance, max speed at brake distance and absolute minimum speed values.

The mod is really incompantible with single player missions? I'm so disapointed with the handling in this game, tell me that I will not be binded by it until the very end...

Loving this mod, the things i would change is incresing the brakes power and fixing the steering on motocycle, that is honestly bad. Not even in real life bikes understeers that much... I would greatly appreciate if someone can tell me how to do it myself.

I hope you are still working on it and that you'll eventually make bikes more responsive yourself!

Sorry for my english