Republic Assault is a full scale conversion mod for the Petroglyphy game Star Wars Forces of Corruption. Using elements from both the current canon, and existing EU to create the best possible game experience. 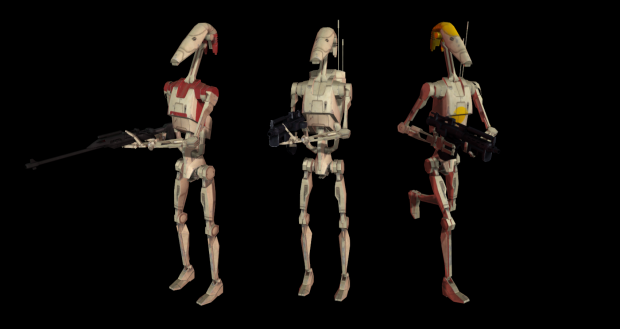 Holy hell are those amazing are they actually your models because I don't like the clone wars show models . these are awesome !

when you gonna release the first version ?

Hoping to so it soon, now that I have CIS infantry.

Why is there no Heavy Battle Droid?

Because it will be a tan B1. EA's skin is a SWBF 2 exclusive as far as I'm aware.

Oh man! That was unexpected! Glad to hear! It came to me out of nothing, and it has been very helpful on a game engine that doesn't allow new animations to be created. ;)

Nice to finally see a mod that doesn't completely half-arse the droids/CIS faction.

These guys are finally ready, and I actually like the animations.

Every mod I know of has used the same Keeper of Faith animations for their B1 Droids, which I really hate. They just don't really work well with any model I've tried, and all around look strange for a droid. But while browsing another mod (Galactic Conflict for AoE 3, by Titan_Joker), I realized I could make the upper torso one piece as that's where a lot of the issues came from with the model.

And while also watching TPM's battle of Naboo, I realized that some of the animations could essentially be stills (IE: shooting produced no recoil).