There's absolutely nothing wrong with blocky Quake. There's a whole lot of people who feel nostalgic feelings for it and it brings back memories - I'm fine with that. More the power to them.

Let's talk engines. There's absolutely nothing wrong with blocky Quake. There's a whole lot of people who feel nostalgic feelings for it and it brings back memories - I'm fine with that. More the power to them. And I believe the Arcane Dimensions peeps fit into that category, based on their selection of preferred engine (Quakespasm) and the game they made subsequently, which is also in that particular style (Dusk). For me personally it's kinda like viewing images through distorted glasses and actually makes me feel a bit queasy after a while. Even if that weren't the case, I didn't enjoy Quake in it's original form compared to Doom, and I much prefer the newer style. Again, there's nothing wrong with it (older style).

But, this is Epsilon so the bias is toward new-school rather than old-school, and not catering for the nostalgia endeared by those who played quake original in the 90's. I mean, I Did play Quake1 in the 90's, but everything was Brown: 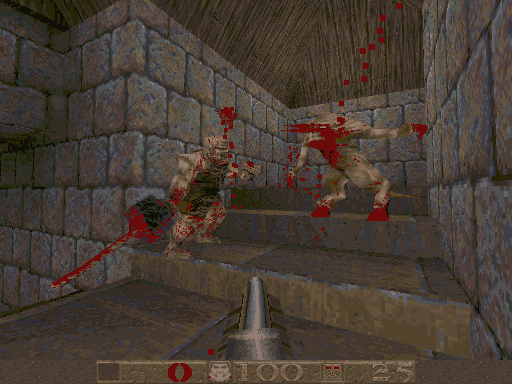 and it was a while before anybody's machines started having dedicated video cards, and stuff like coloured lighting came to pass over here to NZ. So personally I found I was more engrossed in the physical space when it tended towards 'realism', rather than abstraction.

Now, the new hotness is FTEQW, which is apparently great if you're doing a new mod as doesn't have some of the limitations of the darkplaces engine, and there's some great new features. But it's also slow as hell. The same quality visually as darkplaces, but half the framerate. In addition arcane dimensions doesn't really seem to work with it. Every level I encountered, I would get stuck in a bit of map somewhere within 10 minutes and be unable to move. There's something ooky happening. The second-tier new hotness is quakespasm, which is more old-school-styley, or quakespasm-spiked which supports some of darkplace's feature set, but not hi-poly models, bump mapping & normal mapping, realtime world-lighting and dds textures. Quakespasm, however, works perfectly with arcane dimensions.

Darkplaces seems to be the only engine which supports DDS textures (textures which are pre-mipmapped and already in a compressed format that video drives can use directly) and works with arcane dimensions. FTEQW supposedly loads DDS textures but wouldn't load any of the sets I put together. So that was simple. To put this into perspective, DDS textures load around 4x faster than tga, png or jpeg textures - so whereas Necromancers Keep takes 20 seconds to load with high-resolution PNG textures, it takes 4 seconds with high-resolution DDS textures. That's how important this is - nobody is that patient nowadays. In the end I stuck with Darkplaces for arcane dimensions, using the newer (2014) stable version as the older version doesn't work with it (quits out on some missions). Later beta darkplaces builds are no better than the 2014 version, and ones from 2018 onwards are buggy.

The only bugbear is, there is one level in AD which doesn't load in any version of Darkplaces - "the forgotten sepulcher". There's just too much map for darkplaces to handle. So I've decided to repackage this later on, in a separate expansion including some of the unofficial maps like ad-fenrir and using the quakespasm-spiked engine instead. The caveat being 'if and when I can be bothered'. Forgotten sepulcher doesn't contain any of the runes required to reach the secret ending of AD (whoops - did I just give something away ;) ?) so there's no harm done; aside from the fact that Quakespasm doesn't load dds textures, so when (if) I ever get around to doing "More Dimensions", level loading will be a tad slower.

It took a good few hours to convert all of the HD level textures for arcane dimensions to DDS format - luckily there are great tools around for this, mainly ddscrunch. You have to be careful when you do this because textures with active alpha channels more-or-less always need to be converted to DDS DXT5, whereas those without can be converted to DDS DXT1. DXT1 being faster and half the size, this's kinda important. Also any texture which's being used in a script typically can't be a dds. SO it's all complicated and takes a while.

I should mention, finally, that Arcane Dimensions doesn't really support realtime world lighting ie. the highest quality lighting system available in darkplaces and FTEQW. One of the maps works with it (Firetop Mountain) but the rest tend to bloom out like this: 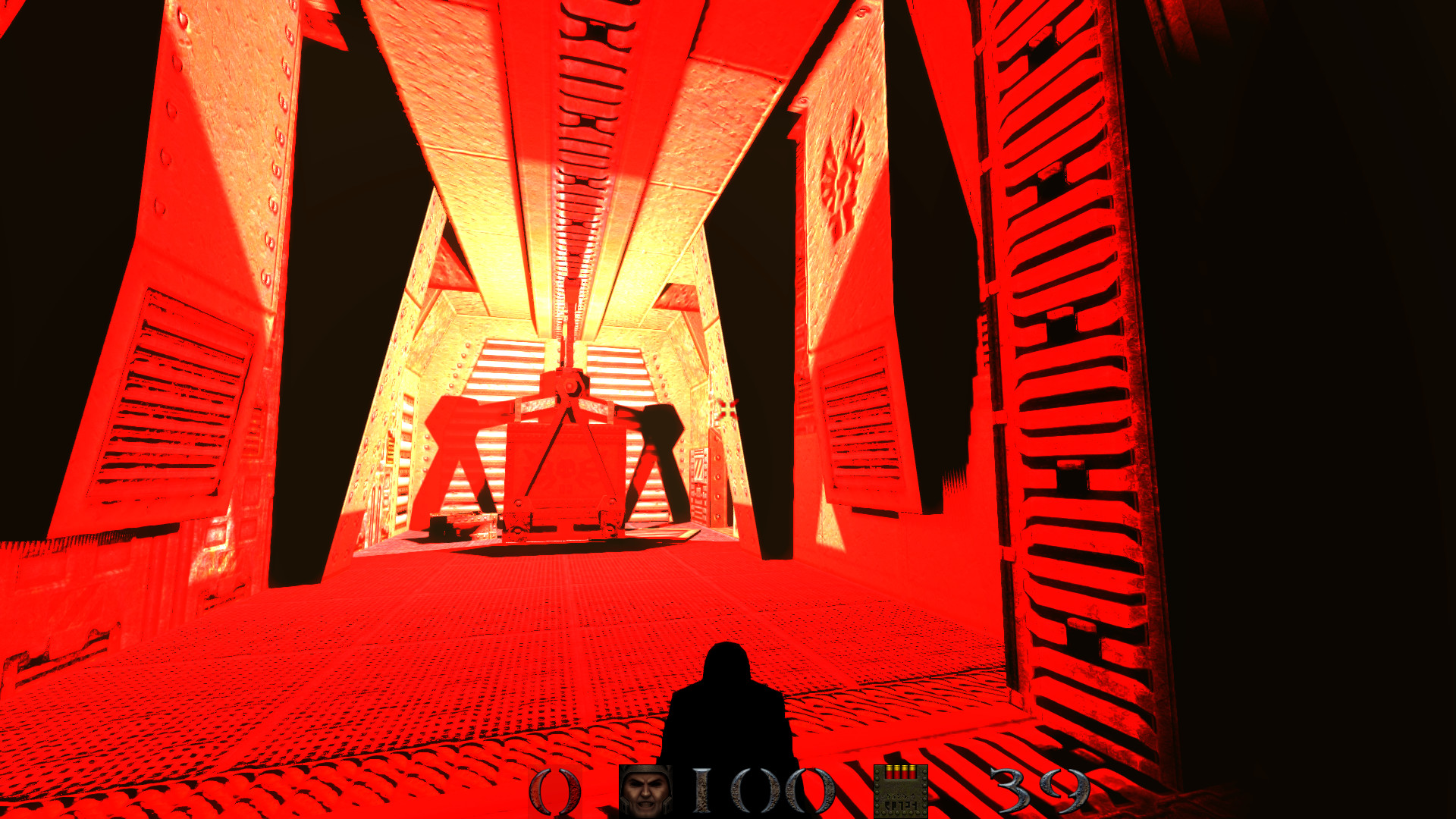 or be too dark in places: 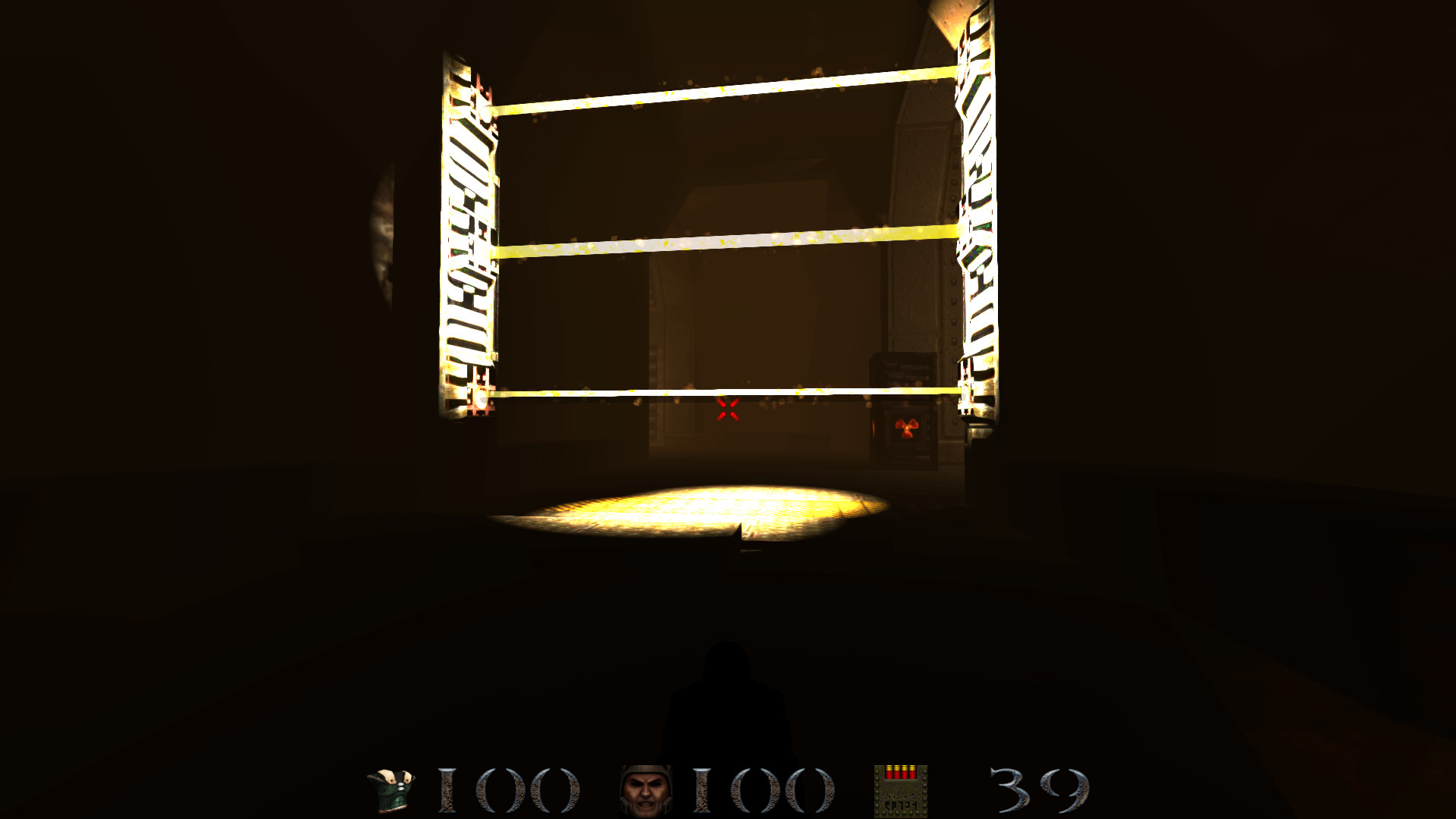 It would be possible for someone to go through and construct rtlights, but it would take forever, and I think wisely, no-one has stepped up to the challenge as yet. So instead we have to use 'high quality' instead of 'full' lighting and you get this: 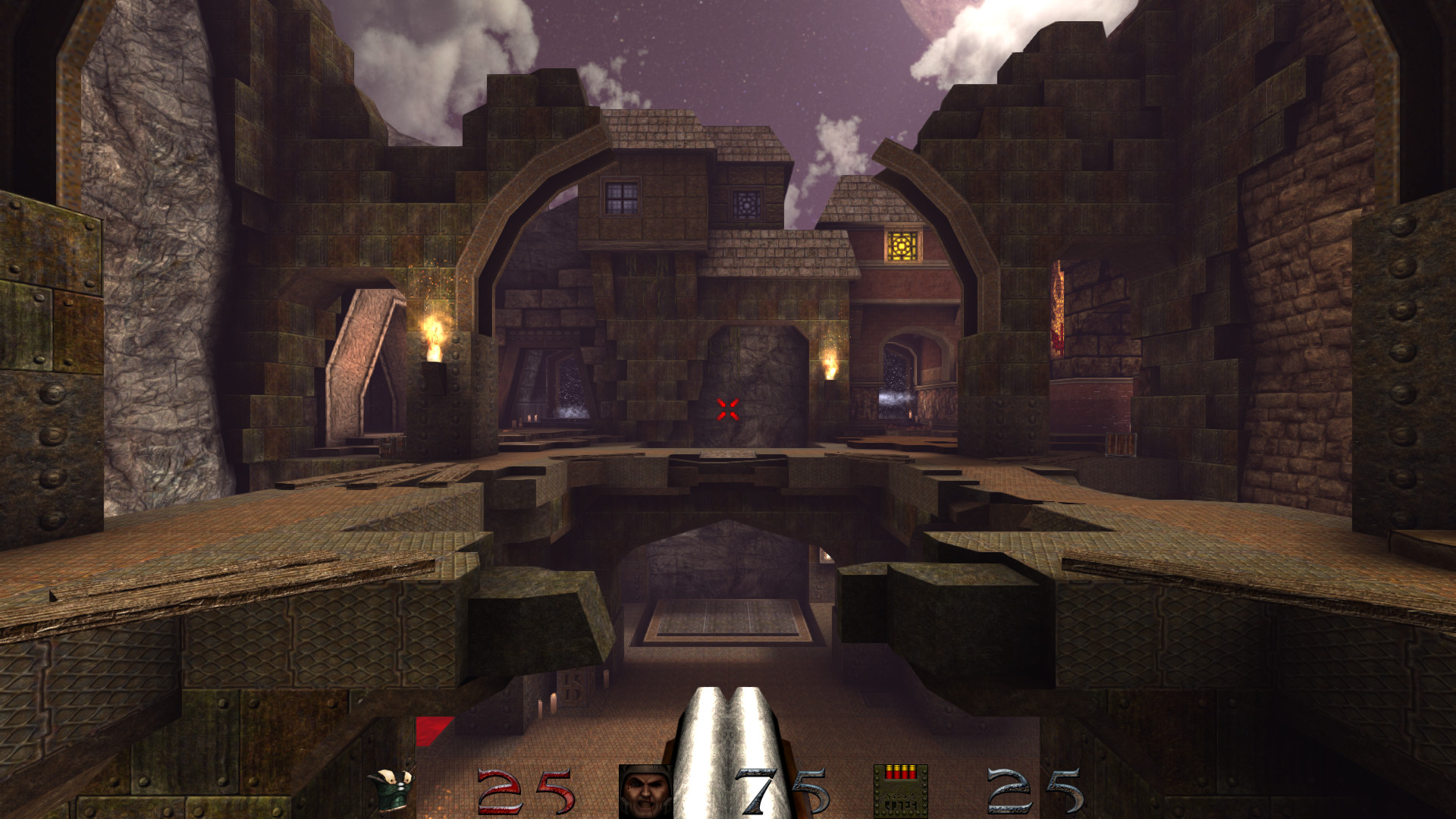 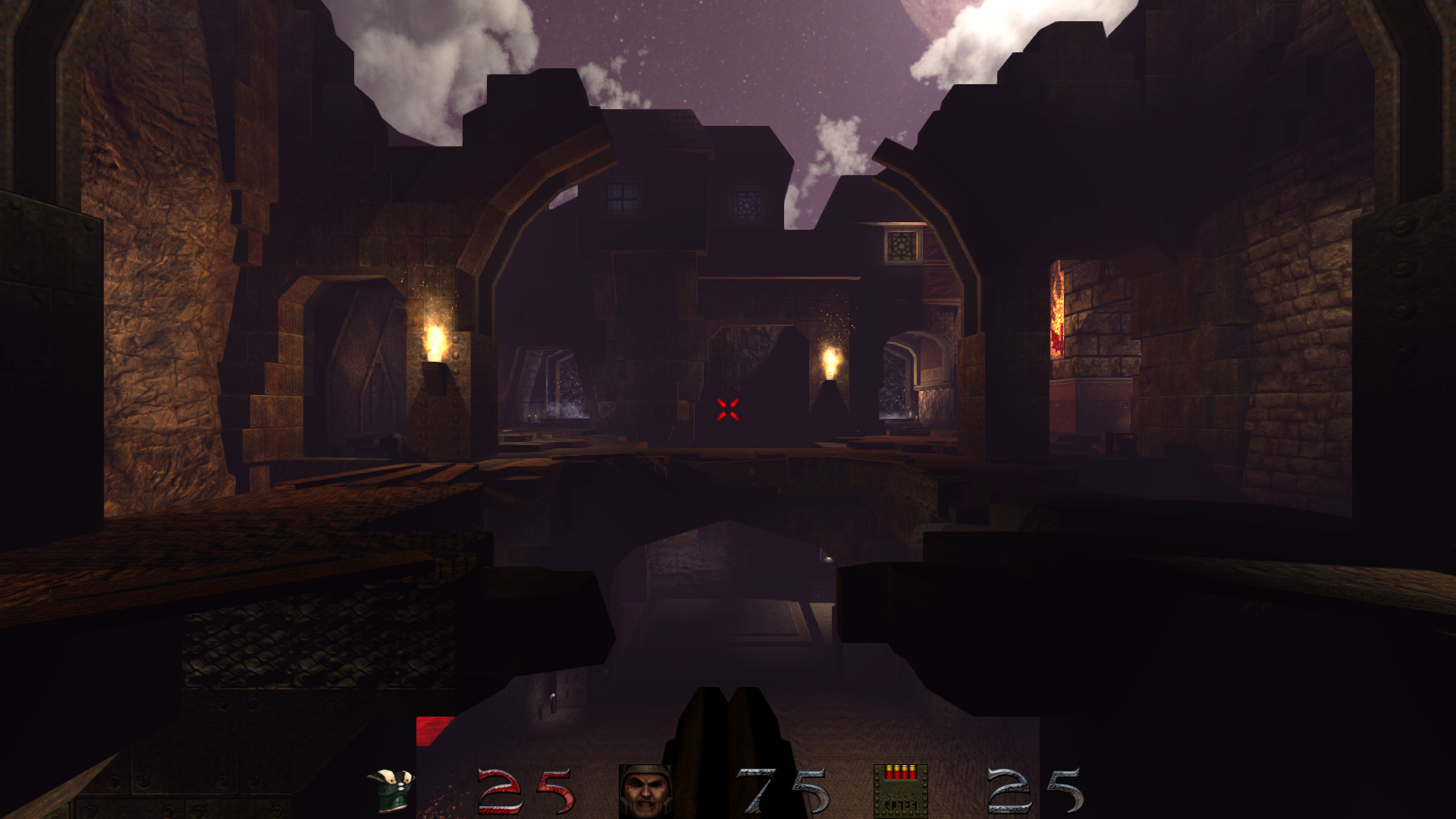 But it's not all bad. Arcane dimensions is incredibly demanding, processor-wise and bumping up the lighting level to RT world lights slows things to a crawl, even on fast machines. With the slightly lower high quality lighting we still get great effects like bump-mapping and normal-mapping, dynamic lighting for particles, and the parameters can be tweaked to make it look more dynamic, so it's not a dead loss. Several of the epsilon expansion packs were the same, in this respect.