Hey...it's August.
WHICH MEANS LESS THAN FOUR DAYS LEFT BEFORE OPLEX ORIGINS RELEASES.
I'm feeling super nervous and excited, haha. I hope things go well. Anyways...I'd really like to show you guys another preview screenshot, but I've been working on the database all day long, so I apologize for the inconvenience. However, I've created a Facebook event for the Oplex release, which you can check out here: Facebook.com
Copied from the description:

It's basically a zombie survival horror MMORPG based off of the popular game, Ragnarok Online (RO). It's basically a game where the player (YOU!) focuses on surviving in a post-apocalyptic world. You'll have to watch your health, eat when you're hungry, sleep when you're tired, avoid shambling zombies, and, most importantly, deal with other survivors.

Oplex is a PK game, meaning that survivors will be able to kill one another (except in designated areas such as safe zones); will you watch out for your best friend while she takes a nap, or will you kill her in her sleep and loot her dead body? Will you band with other survivors to ward off zombies invading your home, or will you ditch them in an attempt to save yourself? These will be decisions that you will need to make as the game progresses.

After spending so much time working on this game (with about four previous incarnations/gameplay mechanic experimentation), I've finally decided to give Oplex a final release. With this, I would like to invite all of you to play on the opening day (or night...haha). Oplex will be released on August 5th at midnight. We will have the download up by August 4th, so players can get patched up and ready to go.


In addition, here are some features you should expect:
+ Survivors will be able to form different sizes of groups, from parties to major organizations. These groups will allow survivors to be protected from friendly fire and allow survivors to trade with and defend one another without fear of being back-stabbed. Think of it as an alliance.+ Health will deteriorate as time goes by. Eating food will replenish your health.

+ In order to use skills, you must use up skill points (SP) - basically mana in traditional RPGs. To replenish SP, you need to rest by sleeping on a bed or in a sleeping bag. However, there's a catch - once you enter sleep mode, you will not be able to see or defend yourself from dangers in your environment. Time to find a sleeping buddy!

+ Finally, I just want to point out that when survivors die, they drop meat, which (as most veterans know) heals a substantial amount of health. Happy killing everyone! :)

As Oplex approaches it's grand opening (less than 5 days from this post), the staff would like to give the players and fans a look at what we've been up to lately. Here's the first of many gameplay screenshots (and videos) to come! 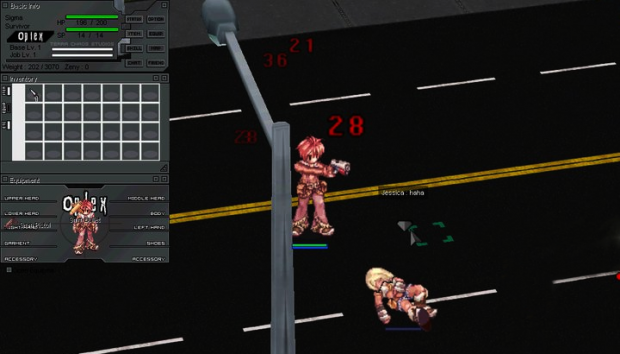 One of our administrators, Xerosigma, has taken on the task of making custom edits to job sprites. When the server opens up, we will not rely on multiple job sprites as we did in the past, but rather, a single whitesmith sprite that is edited to accommodate all weapons.
As you can see in this image, Oplex will be a PK game. All areas, with the exception of the tutorial grounds and safe zones, will be free-for-all; players will be able to hurt each other. However, player killing isn't always the best idea..

Sorry for not posting any substantial updates other than screenshots. I'd like to post up some guides/introduction to gameplay documents up sometime soon. Unfortunately, the staff is hard at work, prepping the game for public testing. In the meantime, here's a track from our music department!

+ Newly designed game mechanics; unlike that of the original Ragnarok Online (or most MMOs, for that matter), your stats will not actively dictate your performance in the game. Equipment can be compounded, upgraded, or even made into hybrid items.
+ Emphasis on "thinking outside the box" rather than pure fighting - "working smart", rather than simply "working hard".
+ Dynamic world; what you do will affect other players. Protect outposts from hordes of zombies, or allow it to fall?
+ Form alliances with other survivors: from small parties to gangs to giant corporations, trade resources peacefully or wage war on other groups
+ Experience the struggle and hardship of surviving in a post-apocalyptic world; travel by day, stay indoors at night, deal with raiders - how long will you survive?
+ Custom graphics; models and textures designed by the Oplex team and Terra Chaos Studios
+ Custom background music and sound effects
+ Usage of the eAthena Ragnarok Online engine

Much more information regarding Oplex will be posted over time.

Q: When is Oplex being released?
A: Public testing begins on August 5th, 2011. From here, weekly updates will be added to the game, ranging from new maps to new items.

Q: Will I need to install Ragnarok Online to play this?
A: No, we will provide an independent client for you to use.

Q: Where can I get the latest news and updates?
A: You can visit our forums or Facebook page.

Q: What does Oplex mean?
A: To start off, Oplex is the principle city of the game. You will find crucial information and backstory regarding the history of the undead outbreak in this city. Unfortunately, Oplex is miles away from where survivors begin their journey - they'll have to travel and prove their worth in order to get to Oplex.

Q: How long has this game been in development?
A: Oplex began as a series of ideas in 2005 by Ducky. It saw it's first public testing release in the summer of 2006, followed by testing in 2007 and 2009. These testing phases, however, do not constitute the entirety of Oplex's gameplay. Rather, they have been experimental gameplay designs (focusing on certain aspects, such as skills, equipment, life deterioration mechanics, etc) in exploring what is fun and what is not. The release on August 5th, 2011 will be the official public testing, which incorporates the essence of Oplex, collective data gathering and testing done over a span of 5 years.

"Last time I played I got separated from my group for a while and survived somehow to find them again in the library. We rallied up and kept watch on each other while we took turns sleeping in shifts until we were ready to attempt to return to a more suitable area to survive. Needless to say, one of the survivors accidentally killed another and we were down 1 person. When we finally were ready to get out of there we made it to the exit and once outside got separated. I'm pretty sure some of us made it, I sadly was chased down by one of the boss monsters and couldn't kill it by myself."
- imdragon, ZPI forums

Will you cooperate with your fellow peers? Will you turn on them and be an outcast? You’ll have to use your resources wisely and make wise decisions. After all, no place is safe - only safer. Oplex aims to create a new MMORPG experience; break away from the fantasy and science fiction MMORPGs. Play something different for a change.

Welcome to the Outpost! (An Introduction)

My name is Ducky and I'm the founder and co-administrator of Oplex. I've been working on the Ragnarok Online modification since 2006. I've had public testing on several occasions throughout the years, where I experimented gameplay styles with my participants and received their feedback. Since then, Oplex has been constantly changing and listening to player feedback in order to make the game a better experience.

Oplex has been in development (and hell) for many, many years. Finally, in the summer of 2011, the team has decided to allow public testing of the game by August 5th, 2011. Although the final release of the game is not yet determined, one can be assured that new features will constantly be added.

omg... ragnarok online, and zombie survival? THIS IS AWESOME!