Portal: Prelude, as its name states it, is an unofficial prequel to the game Portal. Its story revolves around the pre-GlaDOS epoch, even before she was plugged in. At this time, test subjects were monitored by real Aperture Science employees, whose work was tedious, lengthy and repetitive. This is why they decided to build a great artificial intelligence that could both replace them in these difficult tasks, and also take responsibility for many other tasks within the complex and compete with Black Mesa's superiority. All employees of the Aperture Science complex are now eagerly awaiting GlaDOS. Maybe even a little too eagerly, as the upcoming events will tell... This game is totally free. It offers a bit more gameplay hours than the original Portal, with 8 chapters, 19 test chambers, 48 challenges, 6 advanced maps, a brand new storyline and more than 400 lines of english speech with dozens of subtitles translations.

Make no mistake, after all the hype this mod is no lie.

It's been a year since Portal has been released and while there have been many levels and map packs created, the lore has remained largely untouched. There have been countless retellings of Gordan's alternative adventures, Barney and Professor Kleiner even. It was beginning to seem that maybe the game's both critical and commercial acclaim had rocketed the Portal canon into an elevated, sacred plane. Something no one would dare try to interpret in their own way—until now.

Portal: Prelude is the brainchild of French native Nicolas Grevet. Unhappy with the prospect of just releasing another map pack, Nicolas crafted a story around 19 test chambers set in the pre-GlaDOS days of Aperture Science. Put together in a span of only nine months, coupled with a rarely seen (from a mod, at least) shock-and-awe style of unveiling, Portal: Prelude has caught the attention of many people—for good reason. It is a fine example of the kind of quality tightly focused development with little to no resources can bring about. The product delivers a genuine, challenging experience that doesn't try and overextend itself. 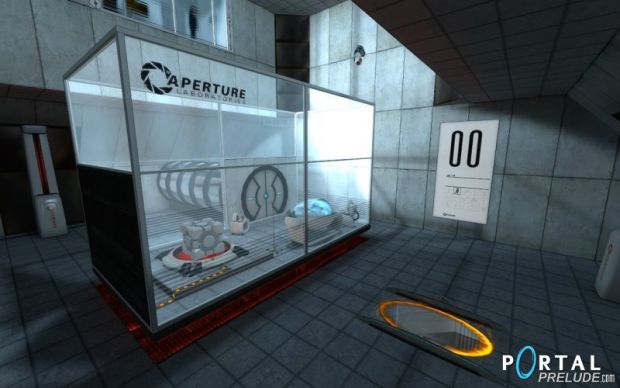 Prelude takes on all the hallmarks of the original game that inspired it. There's science to be done, delicious cake is promised and observers nonchalantly mock you as you make your way from chamber to chamber. During the course of the experiment, you will be introduced to a number of staff employed—seemingly by force—that keep Aperture Laboratories running. It's during the banter between the humans watching you behind frosty-paned glass that the mod reveals its only real flaw: the voice acting and writing.

Understandably, the French-speaking creators decided to go with English voice synthesizers instead of real voices. The results of this, while they may have worked for the robotic GlaDOS, seem out of place for your flesh-and-blood overseers. This is compounded by the fact that the actual dialogue is quite drab. After chatting with Nicolas, he confirmed that quite a lot was lost in the translations from French to English. A future update with real voices and some spruced up dialogue could add a lot of color to the story. As it stands now, the synthesized voices do little to convey emotion and most of the banter falls flat. 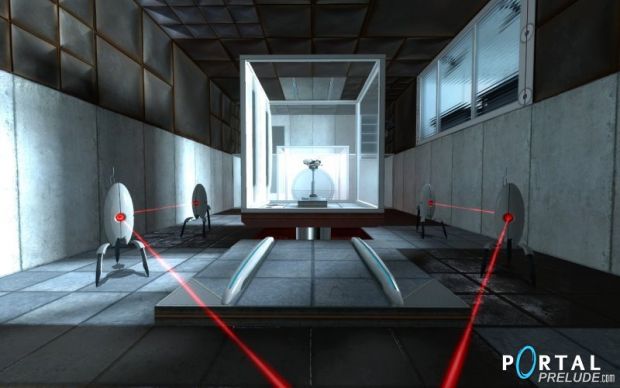 If you're looking for a challenge, then Prelude should be your top choice. There's a few people out there who may exhibit some sort of natural portal wizardry. These people will have posted speedrun videos that will make you dizzy within the first week. The average gamer, the ones not used to thinking with portals outside of a couple months at best, will find this mod hard. Initial playthroughs with the ModDB staff had us a couple of failed attempts shy of thrashing about like some angry German kid. The difficulty starts off at an advanced level and ramps up from there. You can count on every test chamber to employ advanced techniques (multiple portal flings, timed portal shots, etc) and some new tricks/traps that haven't been seen before. For the less graceful, it's a combination of trial and error with some luck sprinkled on top that will see you through to the end.

And oh boy, the end is worth it. Developers spent about 1/4 of their development time on that sequence alone and it shows. No spoilers here, but you'll find that it dovetails very nicely with original game. A delectable treat (cake?) for the fans that makes the hours of frustration and cursing all worth it. True masochists can even check out the advanced maps after they finished the game. Developers even added commentary to the levels which I recommend checking out (make sure to turn on subtitles if you don't speak French). Overall, there's very little this mod gets wrong. Everything from its development timeline, implementation and strategies for attracting media attention are shining examples. Make sure to add Portal: Prelude to your Steam catalogue when it releases here on ModDB on October 10th.

Looking gooooood :P
And Henley needs to learn how to play portal :D

shsssss its all good babah!

Haha yeah, we've all had a crack at it and thou Henley looks like a doofus in the video teaser - this is significantly more harder than the original (plus we are rusty riiiight... its been a year!)

I believe they have organized quite a few translations

First patch after release will support more languages I believe.

That's right.
But it won't make it for the initial release.

Awsome cant wait for this :D Hope they release it via steam

I don't think you look like a 'doofus' Henley...not that much anyway :P

oh please once you play the mod you will understand. Easy slow start how bout no here is a vanilla portal end game puzzle times 40 as the first room. Go on try it :P

Lol yeah it seems like there is alot of fresh puzzels in there, will be enjoying this one :D

Great Writeup
Cant wait to try it...
It's been a long time since I dusted off the Ol' Portal.

Can't wait for this. Hopefully you guys will replace the dialogue with real voices in the future.

I just can't wait till this mod comes out. I don't care if there isn't actual people speaking English, it still looks good.

The only thing I'm disappointed about are the voices. I think I might wait to play till English voice actors replace the robots for a true prelude experience. :)

Release tomorrow! I'm very curious about how well these guys kept themselves to the original storyline, most people don't even know of it... The story of Cave Johnson and the history of Aperture science, its hilarious, but I won't spoil it. Supposedly the official Portal 2 will also be about the origin of Aperture.

As for the voices, this article suggests that the original voice of GLaDoS was a synthesyzer, it was actually a voice actor acting like a synthesized voice. :p

Oh I was aware they used a voice actor (same one as announcer for TF2) but I was just stating that the robotic voices didn't fit right.

How do I contact these guys? I want to edit their dialogue and record some English voice-over!

Maybe go to their forum?

I'm not sure what you're talking about though - on their FAQ is states that the voices in the story are English. Only the commentaries are in French.

The Ren test maps were great, Portal - the flash version (but the real version) was excellent, so i'm really looking forward to this! :)

Oh its actually out now? sweet.

They should get it uploaded here pronto, fileplanets queue system is ****

I suppose they have cut some deal with FilePlanet for the exclusive release a day early but you can get it here as a torrent:

My installer is messing up. Stuck at signage :(
Hope a zip file will come available soon.

OMG!!! I hoped that they'll make a portal2 but I didn't expected I would get it free. Thanks really nice job! I don't think that even with a huge budget anyone would have done better.

Great mod! Better than the original. I found the puzzles to be a lot more challenging and this time through I had to actually think before doing which just wasn't the case in the original. I loved the ending and wasn't at all disappointed at any time. Shame Valve didn't pick this up before release, polish, and sell on steam store imho you guys deserve it.

This looks great! But, I think I'll wait for the actual English voices. Humans speaking like robots will really kill it for me.

if anyone yet hasn't dloaded this yet i suggest you do.

great job guys i thought the ending was great!

do you need need portal?

I just beat Prelude. It's totally ace. Completely worth the download, now all it needs is proper translations and real voices. Thats the only problem I had with the mod.

I got very low fps at final stage...

It took me five days, but I finally got thru to the end. (or is that the beginning?)

Firstly, I must say a big thank you for making a game Valve would (almost) be proud off.
Better than most paid for efforts AND certainly the likes of Gearbox and Turtle Rock wouldn’t have done any better with an expansion pack.

This game (in parts) will be a slight throw back to pre-Valve days where games were unfair and demanded unrelenting precision to progress. Or are we just lazy/young gamers who don’t remember the good ole days when dying and replaying was just the norm?

I managed to discern all the puzzles but my laziness meant I haven’t opened a Portal for almost a year.
So stepping straight into Prelude meant I had forgotten most of the basics, which hindered my initial progress.

when the french voices for the mod?

I have a NOOB question...Do you have to own portal for the download to work?

Cool mod, but level 19 is too hard, not fun at all, other than that .. great with a great.