Maccavia
Troop Overview:
Maccavian army is split in divisions.
The sword division is the one the swordsmen and swordmasters are based on.
Swordsmen use throwable knives and longswords. Swordsmasters use two-handed swords as well as
throwable knives and are more skilled with better armor, while swordsmen still use good armor but also shields.
Crossbowmen/Marksmen division uses throwable axes and crossbows but no bows nor longbows.
Marksmen are elite crossbowmen and have better armor representing the status of their elite.
Spear Division uses throwable spears and pikes. Halberdier are elite spearmen. They use halberdiers obviously and have throwable spears and better armor. These elite armors have Heraldic tabards that represent the Noble they serve.
Lore:

Maccavia is a free cosmopolitan realm, governed by a Dictator Monarch and a Senate of Nobles
and free men. It is a faction of nobles, knights, religious people, diplomats and rich merchants.
Maccavia was once a kingdom of northmen, sailors and pirates, but at a turn of fate, they settled in the winterlands.
They conquered and they had prospered for many years. Each man was the lord of his destiny, free to rule their life as they would like, as long as they paid taxes, lived orderly, obeyed the laws of the republic and worked towards progress.
Maccavia is split religiously. There are...
The New Gods values: Chivalry, love, duty, benevolence, family, order, grace and kindess.
and
The Old Gods values: War, honor, strength, ambition, domination, secrets and plots.

Many of the Maccavian Republic nobles are religious followers of either the Old or New Gods. Many of the Old Gods' followers are rather warmongering nobles, bent on raiding, conquering, fighting and demanding strenght from their allies. They are the loyal hounds of the Maccavian Republic's Dictator.
On the other side there are the Noble Knights, followers of the New Gods. Those prefer to prosper and grow rich, showing kindness and grace.
Most nobles have a strong disregard for followers of a different faith, especially for other such Maccavian Nobles.
New God Nobles see their counterparts as savages in opulent clothing, while the nobles of the Old Gods see their counterparts as just "weaklings" That brawl has been destroying the Republic for a long time already.
Both evil and good elements mix up the Maccavian society.
The Maccavian Army is yet one of the best armored and armed in Perisno, with curious concraptions and heavy weapon training. Every citizen of the Maccavian Republic is taught how to use weapons, how to ride a horse and how to read. Their martial training is without equal.
Many of the Maccavian Soldiers are followers of the Old Gods, but not many of those rise through military ranks, because most of them die in battle, while followers of the New Gods seem to rise quickly, although not being as strong.
Those who show a promising skill in a certain field of technique go to a respective division.
Those showing aptitude and perception, form the Crossbow Division, while those who show strength go to the Sword- or Spear Division - or become knights.
The whole Maccavian military is trained in the use of heavy armor.
Marksmen of the Crossbow Division know how to throw an axe and are very skilled at range. They have the iconic axe-crossbow (Normal variant), that not only shoots bolts with absurd accurancy, pierces through heavy armor like butter, yet it works also as a heavy melee weapon that can be used to break shields, heads or horses. The Crossbow Division, although having enough training
and skill, is still weak when facing close-combat encounters.
Maccavian Crossbowman can become TOP TIER:
Maccavian Marksmen who are still the best trained crossbows in Perisno, carry the axe-crossbow (siege variant) and thrownable axes, and they have a better armor, thus making them better at melee.
Swordsmen of the Sword Division are skilled dagger throwers and great at close-combat. They can slice through any unarmored enemies with ease. They have a round shield for quick movements in battle and their Longsword, but are terribly weak when combating horsemen. However, you'd better not fall off the horse.
Maccavian Swordsmen with enough training and skill can also become TOP TIER:
Maccavian Swordsmasters who carry a terrible greatword can slice elephants, camels and people. They carry longswords and throwable daggers for range and close combat.
Spearmen of the Spear Division are exeptional at throwing spears and tactically adaptable. Neither horse nor camel can charge through the Maccavian Phalanx. Ranged enemy infantry is killed easily as well as infantry. They carry a pike, a shortsword and throwable spears but no shields, for quick positioning and defence. That, however, causes them disvantage when fighting long-ranged enemies and if they
do not brace their spears for combat, they're easy pickings for mounted troops as well. But do not understimate them. They can still throw spears and use their shortswords.
Maccavian Spearmen can become TOP-TIER Maccavian Halberdier that can kill anything that is mounted easily. They still carry thrownable spears and the shortsword, also having much better armor that can protect them from ranged attacks.
All Maccavian TOP TIER units use heraldic heavy plate armors, while the normal tier uses a non-heraldic variant.
And last, there is the Knights of the Maccavian Republic; minor-nobles, with land and titles.
Maccavian Squires are sons of nobles. They are trained since childhood in martial arts. They are very educated and devout followers of the Faiths and Gods. This results in very expensive units, that, with good training can become Maccavian Knights.
As Maccavia is split religiously, it would have been a shame to just create one branch of Knights, so it has been expanded:
Maccavian Squires of the Old Gods become Maccavian Black Knights, while Maccavian Squires of the New Gods can become Maccavian Knights of Steel. These are very valorous and powerful units. They use Greatswords as backup, longsword, shield and a lance. They ride
an armored white stallion.
Black Knights then, are very strong and powerful units, not only do they use a Greataxe as backup but they carry the Axe-crossbow (Normal variant), and a longsword, riding an armored Black Stallion.
Now we go to Politics in the Maccavian Republic:
King Agathor Krex is the dictator of the republic, desiring to have full control over the land and backed by his loyal hound followers of the Old Gods. The new Gods followers seem to dislike him and try to sabotage every attempt he makes. None of them openly challenges his rule, but most would certainly follow a New God claimant.
Naming:
Followers of the Old Gods often choose Nordic names such as: Noble Fenris Stone-Heart, Noble Singvar the Gilded, Noble Segrefied Broken-Shield.
Followers of the New Gods choose more empire/fantasy minded names such as: Noble Falcus Frost, Noble Dracchos Dignity, Noble Tytus Rex, Noble Benunius Benevolent. 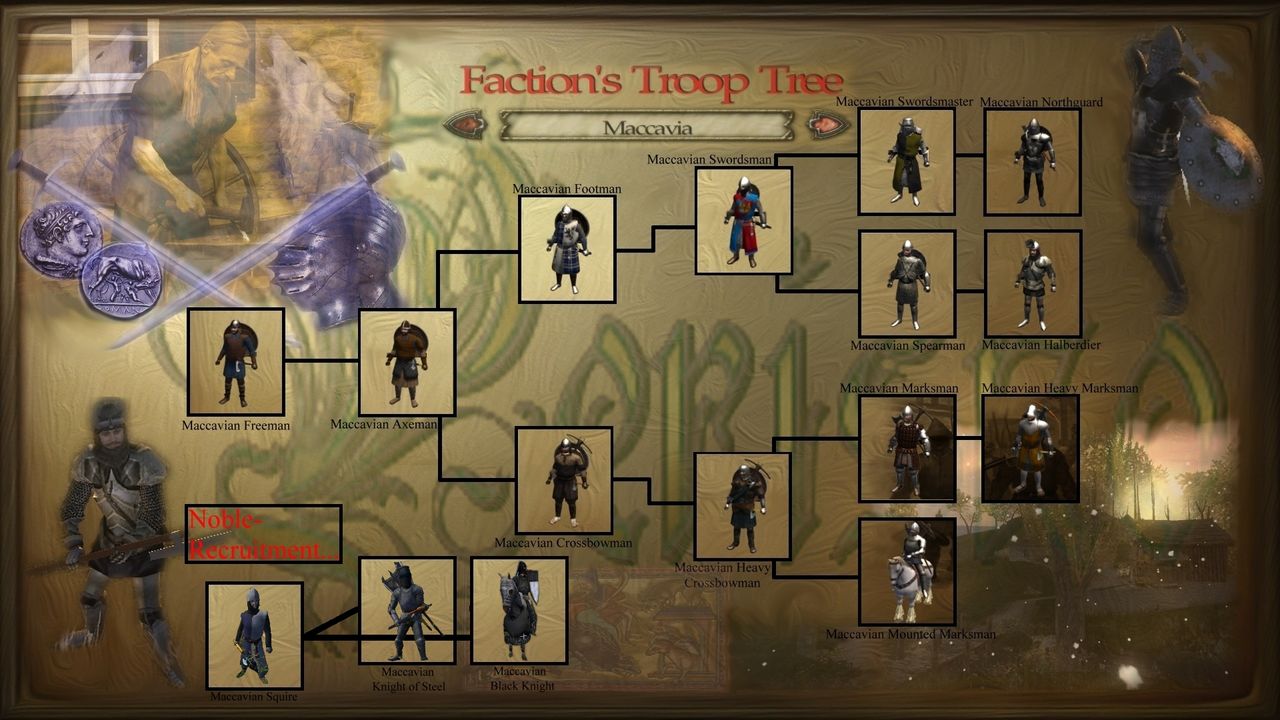