Kingdom Of Tolrania
Troop Overview: These troops are well balanced, with good infantry and deadly bowman. The Tolranians have only one mounted troop thus relying on their High-Tier class for Cavalry.

The Tolranians escaped from the tyranny of the Old Hakkon Empire years ago. They remained haunted by their experiences in Hakkon, but the leaders are determined to start a new life in Perisno.

From the journal of Captain Otto Waveshore:

We have fled from Hakkon, deciding that enough is enough. We will start a new life somewhere else, in a place far from Hakkon. Far enough for them to never be able to find us. We have begun to set sail, a motley bunch of men leaving on stolen ships, given to us by our good friend Admiral Themistocles. He will be punished for what he has done, but he knew the risks, as we all did. As I look upon the endless sea, I fear that most of us will not live to see the mainland.

I have lost track of how many days we have been at sea. It feels like forever since Day 1. Half of our ships have sunk, either to marauding pirates or to large sea monsters or to large storms in the ocean. Every day, our crew pray to Priapus, our God of Sailers.

Day Unknown:
It is unbelievable. We have caught sight of the mainland at last! Our men are settling down in this new, lush land, which we name the land of Perisno. We have not met any natives and no sign of life is seen at all! I worry that our generations will not live on. My health is failing, and I think this will be my last entry.
- Captain Otto Waveshore

Tolrania was founded in the year 323. They are a Republic, vowing that they would be different from the Hakkon Empire. They prospered for seven years in this new land, free of the tyranny of Hakkon and King Comrey. They made trade with the Maccavians and thrived. The population quadrupled in those years, and soon Tolrania expanded. In year 330, something unexpected happened: the Hakkons followed the into Perisno.

At first, there was shock from the Tolranians, then there was anger. The, there was despair as the Tolranians found out how big the Hakkon fleet was.
Apparently, these were knights and nobles also dissatisfied with King Comrey, and had set out to a new world. Almost every Tolranian there were second generation, and few of the first generation were still alive. However, their fathers told them of the horrors in Hakkon.
They decided to turn to the local Redwood Elves for help. The Elven Archers were a mercenary company, and they were hired by Tolrania to do battle against Hakkon. In a famous battle, the Tolranians routed the Hakkon army.
Hakkon was not defeated, but they needed time to rebuild their armies. The people of Tolrania rejoiced after this, and they continued to thrive.
Near the woods of Tolrania, an outlaw group began to form. The outlaws called the Tolranian government corrupt and disorderly. They said that the name "Republic" itself was hypocritical. The government ruled like a kingdom, and the other factions acknowledged this. Tolrania was given the name of The Kingdom of Tolrania by other factions, and soon it was only the Tolranians who called themselves a Republic.
The outlaws, led by an enigmatic man named Nibor Hood, became a large organization that were constantly a thorn to the Tolranian's side.

Tolranian Government and Info:
Tolrania is ruled by a King, after abandoning the idea of a republic. They have a strong military, and their Kingsmen are the envy of the world. Their military is diverse, with horse archers, foot archers, and infantry. Most of their military are peasants recruited from villages. They rely on their top tier noble troops for heavy cavalry. Outlaws roam the forests of Tolrania, and their lords are usually too lazy to stop them. It is up to you to either unite Tolrania or to destroy it. 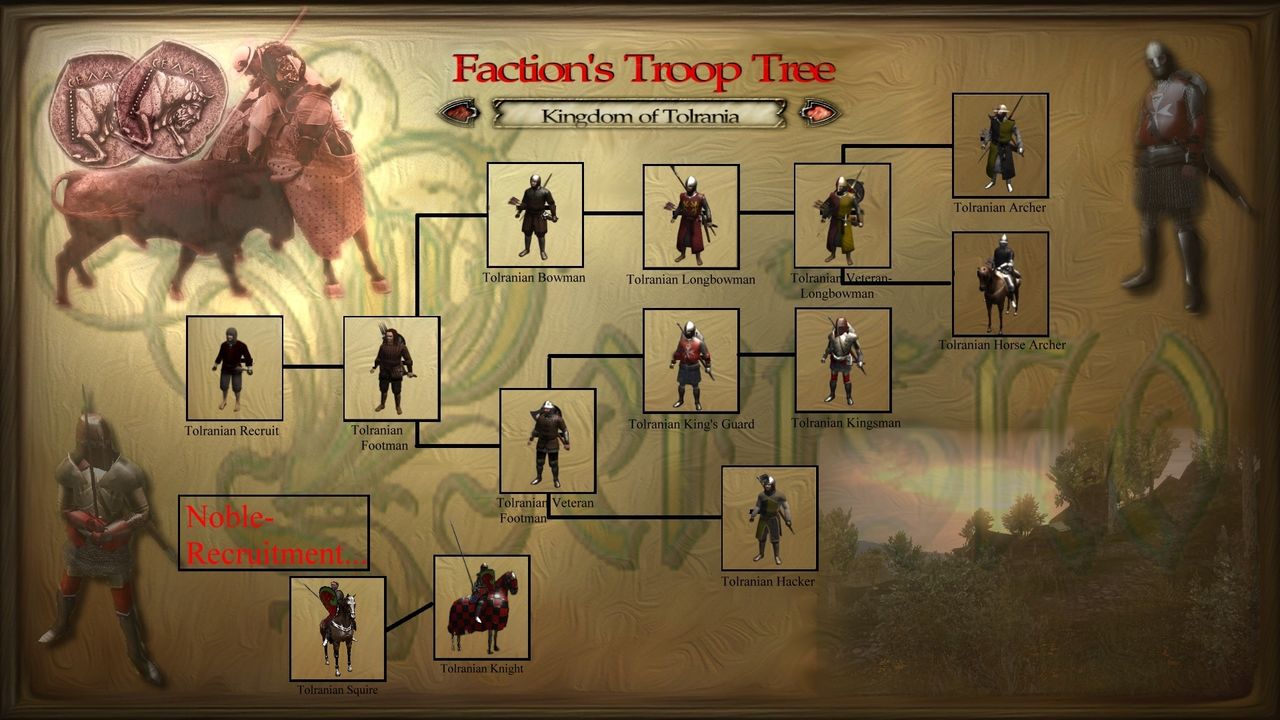