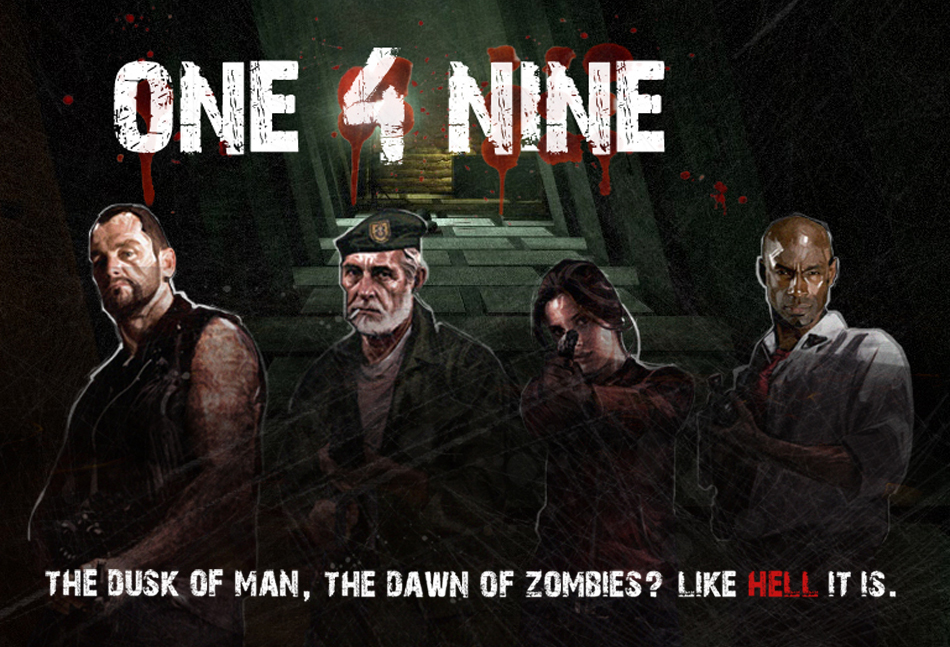 The setting is the Nevada Desert. The U.S. Army have built a Military base around an ancient 'alien tomb', and after years of trying have finally managed to open it.

The four survivors - Francis, Bill, Zoey and Louis - have heard rumors of a fortified safe zone located in the U.S Army's base, but have no knowledge of the tomb, nor what will await them upon arrival...

One 4 Nine featured by Valve, status update, and my next project

One 4 Nine is featured by Valve on l4d.com from today for the next few weeks. Many thanks to Valve for featuring my campaign.

I've got no plans at this time to update either the L4D1 or L4D2 version. Both versions were released about two months ago and my "list of things to fix" is precisely zero for both, not even anything minor. So, the current versions seem pretty solid and stable. Unless any reports of major bugs are reported I'm regarding L4D1 v7 and L4D2 v5 as my final releases.

Since there may well be an influx of new people to One 4 Nine and want some more info, here's the website for the campaign One4nine.co.uk

Anyone who doesn't understand the finale or who just wants the official explanation can find it here One4nine.co.uk [CAUTION: major spoilers, do not read until you've played through the campaign]

Thank you to all who have taken the time to download and play One 4 Nine, and especially to email me providing feedback. I hope you've enjoyed it.

For the last two months I've been working on my next campaign. I'm not releasing many details at this point, just to say that it's not a sequel to One 4 Nine, it uses some Google maps of a location in Northern England as a starting point, and is going to be called "The Bloody Moors"...

After 13 months of working on this campaign...it's done. :D

'One 4 Nine' L4D1 version 7 is now released, introducing all of the bug fixes and improvements from the recent L4D2 version 5.

Version 5 is now released. This mostly has improvements and fixes for versus mode, changes to the finale, and tweaks to the horde spawning.

Hey all, the new version of One 4 Nine for L4D2 is now released. This features quite a lot of changes, most notably; finale has changed, added scripts...

The L4D2 version of One 4 Nine has now been released. This features the L4D1 survivors in L4D2, the music from NoMercy, with all of the L4D2 weapons and...

Version 6 of One 4 Nine is now released. This new version only features minor fixes, however is a worthwhile release as I have merged the coop and versus...

Hi guys. I've released a major update - version 5 is now released. This has a ton of bug fixes and improvements, most notably: the campaign is now 5 maps...

Would this work for L4D2?

Desura version is L4D1 only.

A separate page for L4D2 version would be needed if it's ever going to be published on Desura.

First, thanks for a such amazing campaign: the details are awesome! Played it yesterday form start to end, and haven't seen the time.

But... I've some recommendations:
- When you put a Bile Bomb in the canyon, the zombies don't move. It's like you were at the theatre...
- About Tank, I killed him with just 2 Bile Bombs. Saw him, his head, put on him 2 bombs, and died.
- The horde is predictable. Just a right click, and all are down. I suppose the no-music-announcing-horde is on my side, I'll try to fix it by reloading my audio cache.
- At the end, zombies has just 4 ways, and 3 where they've to climb. With 3 bots in advance, no one get hit, even by special infected.

The only "bad" point for me is the AI. I haven't mapped in L4D yet, but I'm sure something could be done.

Any comment is welcome... I hope I'm not the only guy complaining, and it's only with feedback and sometime criticism that things goes better.

Thanks Mateos, glad you liked it.

The problems you encountered are an issue on your PC. In total, One 4 Nine has now been downloaded around 250,000 times, and I've not previously heard of zombies stopping when bile is thrown, so the problems must be on your setup not related to my campaign.

Unfortunately Valve's vpk filesystem is creating lots of conflicts with custom mods and older campaigns (read my response to StoneCrowUK for the full explanation).

I remember one guy had an issue with no zombies at all moving in any level, and it turned out to be due to a completely different mod he had installed (a custom Zoey with red hair). He disabled his custom Zoey model and then my campaign worked no problems.

I suggest you follow the steps I provided to StoneCrowUK, particularly go to Extras->Addons in the L4D2 menu system and uncheck all other mods you have installed, then try again. I'm pretty sure it will then work for you without any AI or sound problems.

As for the zombies only being able to attack from one direction during the finale, it was intentionally designed like that. It would have been too much for some players to have their vision obscured by the graphical effects while being attacked from all directions. You may well have found it too easy only being attacked from one direction, but other players actually told me it's too difficult. :) I think the current setup is a happy medium.

When I throw it on ground, not problem. I said in the canyon, it explodes on an invisible surface, when flying they're moving, and when it crashes in the "invisible block brush" they still have the animation, but stop moving. I can take a vid if needed, it's the only campaign on all the ones I've tried where I encounter a such curious thing.

The difficulty is OK so ;)

Thanks for replying, will try your advices,

Geoff from rooster teeth liked the campaign. Dead after Dawn made me want the Left 4 Dead games for my PC a little bit. This campaign total makes me want to buy them now.

awesome, but on the l4d2 version there were lots of missing textures, like the sky at the beginning

Missing textures will be a problem with your setup, not the campaign itself.

However, the Valve update has resulted in conflicts with older L4D2 campaigns that included the L4D1 assets because they're using the same filenames and paths for these assets, resulting in missing textures in campaigns like mine. :(

There is nothing I can do to fix the issue, because it's simply not an issue with my campaign itself. So, to fix the issue:
1) Uninstall L4D1 addon support if you have it installed as it's no longer required.
2) Verify your L4D2 cache.
3) In the Extras->Addons menu of L4D2, disable old campaigns that were released prior to The Sacrifice.

Just played it and it's awesome. I love the lighting.
Only problem is I kept dying at the finale and had to redo the whole level, it definitely got frustrating.
Other than that it is a great campaign.

Thanks. :D I've already split map 4 into two pieces (map 5 starts just prior to entering the tomb) and I'm currently adding a new section to map 4 (since it's now a bit too small).

Single & Multiplayer
Tags
Embed Buttons
Link to One 4 Nine by selecting a button and using the embed code provided more...