The new NProject Mod release. This new version further improve the game much more compared to the previous version. Almost all bugs in ZH have been fixed as far as possible, including numerous graphical/sound issues. New units and features given to existing generals, also not forget several balance tweaks for more fluid gameplay. 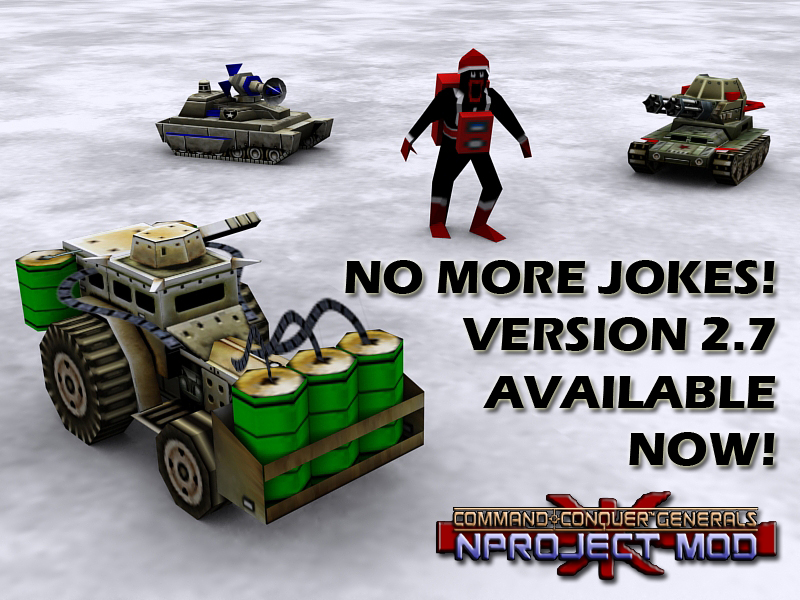 NOTE: Don't expect the Shoop Da Whoop Guy available in NProject Mod. That unit is just a joke, for promotional only, and NOT the NProject Mod feature.

To install, simply extract the ZIP file, run the installer, and follow the instructions.
Read the included readme for detailed change logs and installation notes. 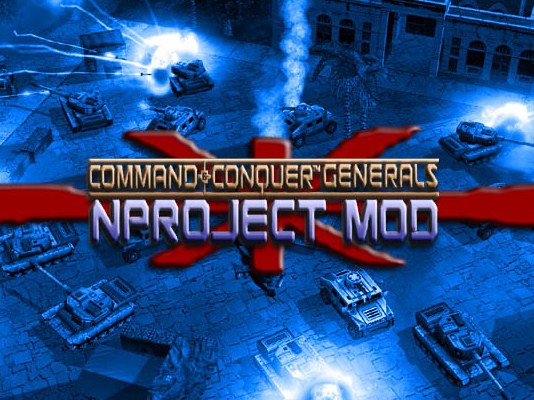 me too. hope it works with german zh. well it should.

tried it, liked it. awesome mod. could you please change the terrorist for the next release? i still have that demo car unit Moddb.com

the units sometimes go "beneath" the bridges instead of crossing.

thanks for such a great mod

well this mod built on english version, so when using this mod, non-english censorships were removed and the language changed to english. because of this, Terrorist will not changed to that Demo Drone.

but maybe I will use that drone for something else, just wait for it.

for "the units sometimes go beneath the bridges instead of crossing", it's naturally happen in ZH. I can't fix that as it's the engine limitation.

Me too... Downloading now

when i start it up it says error
D:

then you should tell more about your condition. just say "when start it's error" wont help much.

never mind it was my fault sorry
i just played a game tho and theres this bug were the AI doesn't attack much and they all make a huge amount of vehicles and stay in thier base
my alli had like 100 units just sitting in his base
:\

ah, the classic aoe 2 cheapness. on easiest, your ally makes 200 units(the max), and then sits arounds doing nothing

High hopes for this!! Been wonking out on Remix, and that AI is superb - stable as hell, too. And super-hard to beat more than 2 opponents on hardest setting. REALLY intrigued to see if you got *all* the bugs out (except the hardcoded ones) - you are one tenacious dude to hack away! mind like a machete, eh? 2.6.1 was excellent, so...

Allies??? Never thought about that...I usually take on 2 or 3 all by my lonesome...hope the AI on hard is a ball buster!

hey the camera in zero hour do you make like that one in empire earth?????

Does it have naval stuff like aircraft carriers, submarines, and battelships?

n5p29 i downloaded it on windowa xp where i m having command and conquer generals zero hour and after intalaation i clicked on icon of npm it says tht files like skirmish.scb.bck is unavailable

n5p29 now i downloaded version 2.7 and installed in zero hour folder then i also extracted the shockwave file that u told in zero hour/data/script. then the icon of npm came on deskstop when i clicked the original Zero Hour started wth blue layout not that nproject with red layout so please help plz reply!

something broken with your game directory.
try uninstall the ZH, and clean any remaining files there. after that, install back the ZH, patch it to 1.04, and install the mods again.

and don't spam your post everywhere. it will not solve anything.

How you meen how to patch it,Download the patch (Serch it on google) if you haveing any more problems say it :D.

n5p29 it is saying that " Old File not found. However, a file of same name was found. No update done since file contents do not match" while patching it came what should i do????????

I am having an issue when trying to run. When I try to run the .bat file (or shortcut) I get a pop-up telling me that the generals.exe failed to execute (error 740: the requested operation requires elevation). I made sure I was patched to ZH 1.04 and none of the solutions in the readme worked for me (I also tried running and installing with admin). Any idea what I'm doing wrong?

did you put it in your dirctory?

i need help when i click on the short cut on my desktop nothing happens i was waiting for like 10 mins =/ but nothing :(((

buy Generals ZERO HOUR, patch to 1.04, then install this mod.

and air force generals raptors leaves red blue colour i cant see that i hav downloaded and installed ur 2.7 and 2.7.1 patch too. these r awesome thanx for mode but please what is the problem of that they dont leave colours behind help please!

Um.....are the campaigns supposed to be grayed out?

yeah, the campaigns were temporarily disabled until all necessary new stuffs added in the mod, thus the campaign will being adapted to the mod. you still can play the Generals Challenge though.

a how come thare is no changes at all to gla exsept the demo traps and demo drop??i trried slealth demalition toxic and regular?? and i would sugest for 3.0 change the buildings

Ok well i downloaded the script fix file or whatever
and now it says failed to copy the Install_Final.Bmp any help?

check the admin privileges. disable the UAC if necessary.

i have a quick question i have win 7 and the first decade and when install this mod the batch files do not work can someone help me here.... i am sorta new to playing mods

when i try installing the patch 1.04 it says "Old File not found"... any idea what that means and how i can fix it? thanks

I've experienced that for 5 months but I found an answer:
Re-install the game without placing the crack then patch it.

I am on a windows XP, so UAC is not an option for me.

before i install any mod, i first reinstall zero hour and then patch it. i did it for this mod then used the installer for 2.7 and installed it. now when i start npm from my desktop, it comes up with the loading screen and then says
"technical difficulties. you have encountered a serious error, serious errors can be caused by..."
its so annoying cuz i really like the look of this mod
plz help

I have re-downloaded the file, and put the patch in immediately after install, overriding the original files. I do have a gamedata.ini file, but I doubt that would interfere with the mod (All I've done is change the camera height.)

Do I put the Add-on in main directory, and override with the patch one?

I don't have any .ini files in my "INI" folder. If so, the game will write "technical difficulties" error. This might help you.