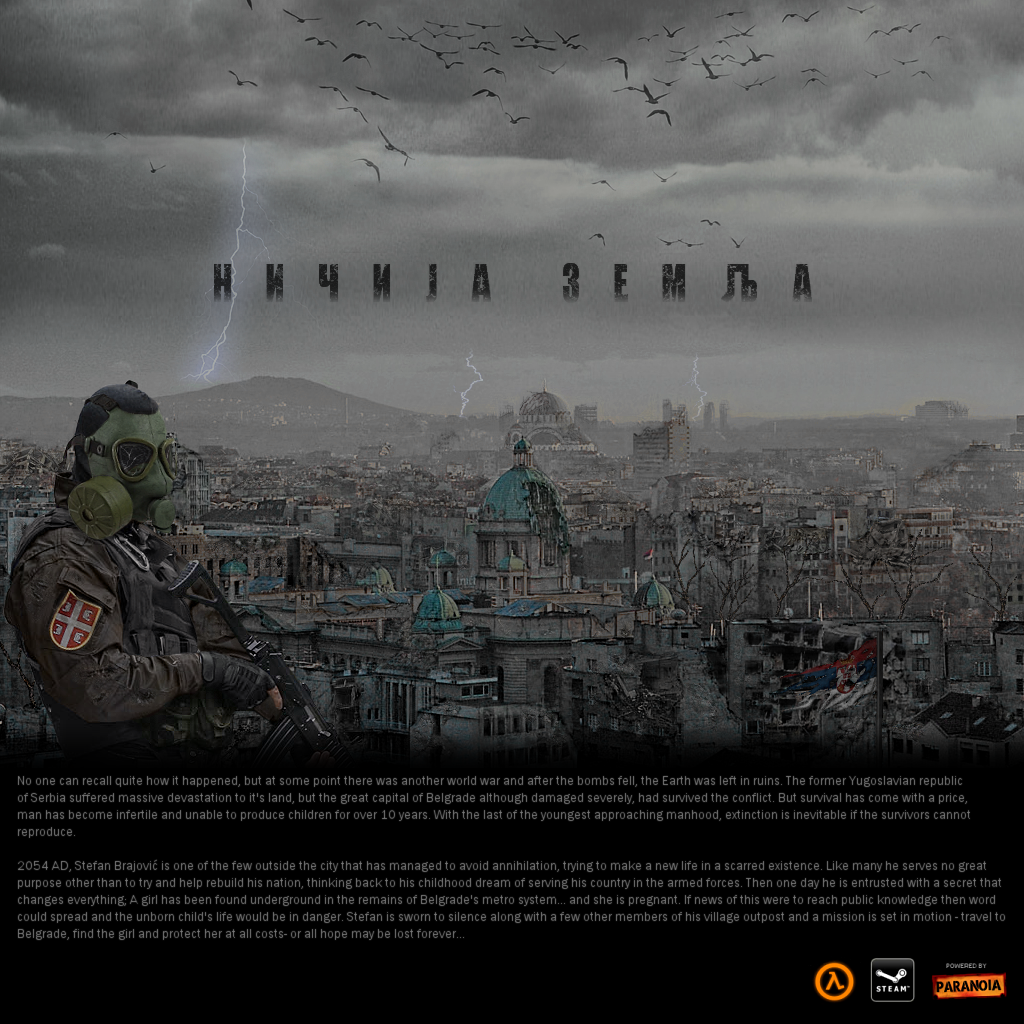 Welcome to No Man's Land...

"No one can recall quite how it happened, but at some point there was another world war and after the bombs fell, the Earth was left in ruins. The former Yugoslavian republic of Serbia suffered massive devastation to it's land, but the great capital of Belgrade although damaged severely, had survived the conflict. But survival has come with a price, man has become infertile and unable to produce children for over 10 years. With the last of the youngest approaching manhood, extinction is inevitable if the survivors cannot reproduce.

2054 AD, Stefan Brajović is one of the few outside the city that has managed to avoid annihilation, trying to make a new life in a scarred existence. Like many he serves no great purpose other than to try and help rebuild his nation, thinking back to his childhood dream of serving his country in the armed forces. Then one day he is entrusted with a secret that changes everything; A girl has been found underground in the remains of Belgrade's metro system... and she is pregnant. If news of this were to reach public knowledge then word could spread and the unborn child's life would be in danger. Stefan is sworn to silence along with a few other members of his village outpost and a mission is set in motion - travel to Belgrade, find the girl and protect her at all costs- or all hope may be lost forever..."

Ničija zemlja (Nichiya Zemlya) is a Half-Life total conversion located in a post-apocalyptic Serbia. The name comes from the Serbo-Croatian word for No Man's Land (modern Serbian, Croatian and Bosnian) which historically refers to the area of land between fighting groups above the trenches in World War I. In this case, it describes the devastated and often dangerous land left in the aftermath of the fictional nuclear destruction. The storyline is inspired by the book "Children Of Men" by P.D. James (which is also a film) and general post-apocalyptic and dystopian films and games.

I've always wanted to work on a post-apocalyptic mod with a ruined country for some time, being very interested in lifestyle and culture in Russia and other Slavic countries I became more interested in Serbia as a country through it's historic ties with the Russian federation and eventually settled on the former Yugoslav Republic as a location for the mod. What's especially nice for me is that the country uses both Latin and cyrillic so signs are often in either script or bilingual so you get a real variation of styles and fonts on text based props.

Locations in the game include Belgrade itself, a fictional Metro system based on Slavic designs in Russia, Belarus, Bulgaria and the existing Serbian "Beovoz" system (especially Vukov Spomenik). There will also be villages, an industrial sector, underground bunkers and even a ruined Orthodox Church as well as secret locations I wont go into yet. Whilst the locations aren't original they will be at least authentic and as unique to the country as possible. These locations are populated by such factions as the "pirates" surviving criminal elements and "The New Yugoslav Army", a group of individuals who are nostalgic for the days of the SFRY (Socialist Federal Republic Of Yugoslavia). There are also mutants found in some areas of the wasteland.

The mod runs on the Paranoia renderer which no modifications, it is likely that in the end there will be very little new code added due to the existing features already present which suit my needs perfectly. AI will be monitored closely and tweaked if possible with the use of more open-areas to avoid such problems encountered in the popular Russian modification.

A somewhat detailed FAQ to address some queries you may have and explain what the mod is about and what I want to include.

I wish this was still being made. :'(

Ovaj projekat je umro jos pre 6 godina. This project has died 6 years ago. Steta, starno bi bilo kul da su ga napravili. To bad, it would be really cool if they have made it.

D3ads, can You tell us if this project is still in development? Thanks in advance :)

D3ads do you need some sound effects?