Justin Harvey(Grey), Leri Greer(PushB4K) and Brian Comer(Tatsur0) sit down and chat, giving us an insight into the development process behind Neotokyo. Circle stoking included.

Developer Banter, a brand new show all about development of the mods and indie games. First up in the hot seat is Neotokyo, a first person shooter that aims to provide a visceral combat experience in a rich futuristic setting. The setting emulates combat in a cybernetic-police thriller, introducing augmentations such as active camouflage and networked IFF systems to the urban combat genre. 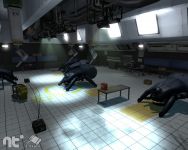 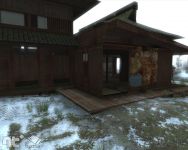 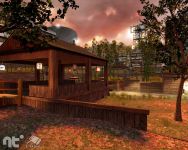 Want your Mod or Indie game to be on Developer Banter? It's really quite easy to do. Just send an email to dave@moddb.com and give all the goss on your current project! Don't forget to watch this group so you can receive updates when a new show is out!

Cyber-punk ... this is what you're aiming at, right?

Even tho you mean no offense i still come off feeling rather crappy :( My mod has been running for almost 2 years and I do a news report every month, not to drag people around, or whatever else you guys said. but because we need it. and so do the watchers. Documenting your development and showcasing your work is a very important part of building a team.

what your saying does have some truth in it. but putting your self out there is a necessity for us.

a bit vague but the main point being....hmm not realy a point here.
just had to say something.
P.s. the theme for the opening of the audio is way too long. :)

Plinkotink,
Think you misunderstand. What was said was a lot of mods would post untextured works (really in this case you shouldn't) and just fade away and never release. ZPS is a good example of this so of course some of us on the team can relate. Once you start giving people gifts of media they want more and more and if you don't satisfy them they often turn on you and so we chose not to do this and instead focus on the mod.

For others they need to attract other developers and releasing media is one way of doing this but has it's price.

Actualy, I think you are right.

Sorry I didn't mean to say ZP:S faded away. I was trying to say that it got locked in with Media releases and would have been better for us had we not put out so many.

On NeoTokyo we focused more on the development side and it was a lot less stressful. Lesson learned from both mods.

I agree, that's why I only use the news section only for releases, and April 1st jokes. No hype nonsense, and it works.

It was alot worse in 2004 and before, when the modDB news page was polluted with lots of various unskinned renders of conventional firearms typically seen in a Counter-Strike clone.

Media releases are just distractions for the PR and can hurt progress.

why did you gave up on NT? with a couple of updates you could have atracted more players,and I'm not the only one who thinks this way.

Finally. I thought it was dead.

I thought you bastards were dead too! Good to hear from you, looking forward to it.

Anyways. The banter was a bit long and random, but some good info and cheap laughs prevailed. Nice media, specially the subway. I don't think this is a cyberpunk but its closing in on it depending how you lay it out. Sounds very promising and hoping to see some more updates soon :D

No sorry. I have a fever and didn't finish sentence. I'm Tatsur0 the Co-Founder/Lead Developer of ZPS and was expressing the torture that is "Media Releases" I got trapped early into development with them and was never able to pull out and just focus on the development side of things when it was time for Media releases.

It was so much easier not having to deal with a bunch of these on NeoTokyo and a lot of work got done.

This was a nice podcast. It's good to make something different to the modcast, which seems to focus more the releases on moddb.com now. To focus on one dev team only and to let them speak to the community is a good thing for the dev banter podcast. Keep on the good work.

It's good, it's basically the second half of the modcasts. If you remember, the modcast would have 2 parts: part 1, a recap of all news and mods recently released, and part 2, an interview with a development team.

This is a really good idea to get people more behind the scene info about different mods. When you do a modcast you don't discuss a mod that much because you have a bunch to cover and what is really being discussed is top of the layer information. With this you get a better overview and some developer commentary which is very interesting for fans and supporters out there.

I'm really happy to see that NeoTokyo was the first mod to get featured on this seeing as it's an amazing game with an incredible atmosphere, you can tell a lot of hard professional work and effort has gone into it (I'm a tester for it so I've got a better view of what the mod is like, but mark my words). Like they said, their strategy has been to lay low, less stress and more quality time has been spent developing this baby. Their 99,9% done and now they need all the hype they can get, and I'm pretty sure there is more to come.

Great stuff, guys. Well done. Very inspiring, and I loved the Developer Banter. I highly anticipate this mod, being interested in Japan, Ghost in the Shell and the gameplay you've described.

Good to see a quality update guys... coming along nicely... good to see a mod come out from actual game developers... looking forward to more...

Now how aboht that Trailer you guys have been talking aboht.

Really great stuff you guys got here. I think that soon with some more detailing and slight level tweaking you can have a really killer mod. I'm a fan of the Asian atmosphere, if its pulled off right. Just remember to make it look very ascetically appealing, mostly everything is detailed and makes sense. You might want to research some modern Asian architecture to make sure your pulling it off right depending on the area. Seriously guys i think this mod has potential and cant wait to see its future progress.

I sware I saw this mod atleast 2 years ago. It's awesome to finaly see another news update since then,

Also, are those wannabe tachikomas? ;)

I can't wait for this to get released, so excited that it's 99% done :D This has been one of my "most anticipated" mods for ages, partially because of how mysterious it's been.

swwweeeeeet new podcast to download ;D and best of all talkin about a mod that i have been waiting for since it was announced! great work guys

I'm still looking forward to this!

Very impressive! Another one for my tracker!

I didn't wanted to say this, but this page only talks about ZP:S. Enough please, the mod is cool but it's like stealing people from here D;

@Neotokyo mod
Hmm this looks like an interesting mod.

I was absolutely confused about where ZPS was mentioned in this article. Glad I'm not the only one going crazy. o_o

sorry no that's the old version the new one is a source mod.

That's why he says he can't wait. Doofus.

Oh come on guys, people make that sort of mistake when they're tired. ;)

Nice idea. I'd like to do this development banter thing eventually when we're closer to release with Petrograd.

Man this mod looks SWEEET! I'm glad Studio Radi-8 NeoTokyo team was focused on delivering a top quality mod and tight lipped about it till the end. End of the day I rather be playing a mod then looking at skins, models, and trailers.

wow im from NZ too where abouts are you from