Monkeystrike is the answer to the dozens of realistic, "CS-like" MODs which pop up everywhere. Monkeystrike is a "Fun" MOD. We want to bring the player fun instead of an ultra-realistic damage-system or whatever...As you might have noticed, this MOD is about Monkeys. There are different classes with crazy weapons, skills and different gamemodes. More informations can be read below.

Monkeystrike is the answer to the dozens of realistic, "CS-like" MODs which pop up everywhere. Monkeystrike is a "Fun" MOD. So go get your "groove on" with some monkeys!

[page=Page]
modDB.com: For those who just love to live under a rock and have no clue who you are and what MonkeyStrike is please state your real name, job, place where you are from and age!

Heya, my name is Friedrich Bode, I'm an 18 years old student living in Germany and happen to be in the leadership of Monkeystrike.

modDB.com: MonkeyStrike was thought up when? Why a mod with monkeys at war? Is the mod like another game or mod in your opinion?

We came up with the idea of Monkeystrike approximately 2 and a half years ago, but the development progress started around 6 months later. We saw a lot of potential in a MOD about monkeys, because first of all there hasn't been anybody who did something like that before and secondly the concept gave us lots of freedom with designing weapons and other game features. I think, the only similar game might be the Donkey Kong series (in special Donkey Kong 64), however it doesn't have monkeys fighting against each other, a different target group and so many other aspects MS doesn't have and vice versa.

I'm one of the two founders so I work on the MOD since the very beginning, it's been pretty much 2 years by now.

modDB.com: Describe the best feature in the mod in your opinion? What should the person look for that they might miss?

Monkeys fragging each other with pineapple-launchers, strawberry-machineguns on the moon, northpole and in the deepest jungle. You simply don't want to miss THAT!

modDB.com: Describe the weapons and what the weapon you will use the most and why?

MS got weapons you certainly haven't seen before in any other game, for example the pineapple-launcher, grapefruit-shotgun or tnt-cat. 12 different weapons plus their secondary functions will assure that there is a wide range of weapons the player can pick from. I don't have a particular weapon I prefer playing with, each monkey class comes with a preset arsenal, so the monkey's attributes also affect the effeciency of a weapon. If you want to shoot with the melonpip-gatlinggun, keep in mind that you will need to play with the strong but slow gorilla. The double-shot of the baboon's grapefruit-shotgun is nice, so I guess that is one of my favourites ;)

Like nearly everything in MS, the damage system isn't supposed to be realistic (we would have had to figured out how much it hurts when you get a strawberry, pineapple etc. shot on your head, so we better came up with something else...). However it doesn't take so long to kill an enemy as in TFC for example. I think we found a good mixture with our damage system.

modDB.com: Game plays whats your favorite and explain how the games plays will work in MonkeyStrike!

All right, we got "Deathmatch" which is probably self-explinatory (everybody vs everybody, the player with the most points wins). Our 2nd gamemode is "Capture the golden banana", a team based mode. There is one golden banana located in the middle of the map and both teams try to capture it in the hostile base. The 3rd one is "Fruity sacrifice", which is also played with 2 teams. There are several fruits spread over the map, the teams have to collect them and bring them to their sacrifice point. You can steal fruits from fruit carrying players by fragging them or you grab them from opponent team's sacrifice point. All gamemodes are lots of fun ;)

modDB.com: I see on the site so many different types of monkeys for the mod. Within the team who had the job to come up with all of them? What type of monkey should I be if I want to kick but?

There are 6 different monkey classes in total, only one of them (the mini-monkey) is fictive. Sensai (the guy with whom I came the idea of MS up with) and me found rather soon the monkey species we would like to see in the MOD, he made the sketches and here the classes are now. I usually switch the class rather often, depending on the playstyle of my opponents, the map and what I feel like to do. If I want to get right into the action and kick some serious butt, I pick one of the heavy classes, the gorilla or orang-utan. Sometimes I prefer sneaking around around and slay my enemies with the sabres of the mini-monkey or attack them from far distance with the chimpanzee's banana crossbow. You see, Monkeystrike has something for everyone ;)

modDB.com: Explain how the maps will work with the weapons and classes of players?

Not much to explain here in my opinion. We tweaked and revamped lots of maps in the release, all of them are much fun to play and suit to the gamemode they are made for. There shouldn't also be any problems with the different sizes of the classes and features (fly mode of Lemur). Several maps even support certain abilites (double jump).

Day of Defeat, The Specialists, Action Half-Life, Natural-
Selection among others.

modDB.com: What is your feel of the Half Life fan base as a group?

I have the impression that the Half-Life fanbase is by now rather picky, which isn't bad since it motivates the MOD developers to make better and better MODs. I'm sure the people will enjoy playing MS.

modDB.com: With Half Life 2 on its way will MonkeyStrike move over to the upcoming game?

There's nothing for sure so far, but for now we concentrate on the Half-Life1 release and future updates. Some of us already got other plans for HL2, but we will see...

modDB.com: Any other projects your working on?

A UT2003 modification called "Bullet-Proof", check out the site: Bullet-proof2003.com

Looking forward to play the MOD with all the fans and other people like mad :)

Now for two images just for you MS FANS :) 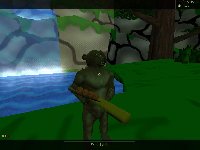 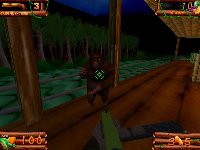 the mod is nice and fun from the alphas I tested you all are in for a treat!

I look forward to being taken out by a lemur.

/me loads watermelon into gattling gun

amazing what things go on while you sleep hey.

it's almost like the under pants gnomes from South Park :P

grr thats it! am gonna dl this mod wether its ready or not! lol O_O