This mod should be taken as more of a sandbox/"mess around" module. Typical gameplay may be disrupted by certain tweaks/additions, and this may impair the immersion for some people.

Furthermore, this mod is a work in progress. Certain things may be buggy/broken, and changes/additions may be altered or removed at any time. By downloading the mod, you acknowledge this.

After the release of v0.1.1, I was a bit dissatisfied with how the mod has progressed thus far. I decided to take the liberty of making the next version much more grand and expansive compared to its predecessor. Taking inspiration from suggestions left on Modified Native's profile, Criminal Expansion was born.

Mount & Blade: Warband has never really catered to the life of criminals, and thus leading a life of crime doesn't appear to be a very attractive option. One of my ways for remedying this is offering ways to "bypass" certain bars the game holds against you. An example can be found below.

It isn't entirely perfect, but price does scale depending on a certain factor: Notoriety. Honor can be obtained when doing noble or good things, and notoriety is gained when performing misdeeds or attacking certain parties (Village Farmers, Caravans, Manhunters). More notoriety under your belt raises the costs of getting smuggled into cities, so it's always a good idea to temper your madness to when it's affordable. Speaking of affordable, here is a gentleman the scoundrels of Calradia should become intimate with incredibly quickly. 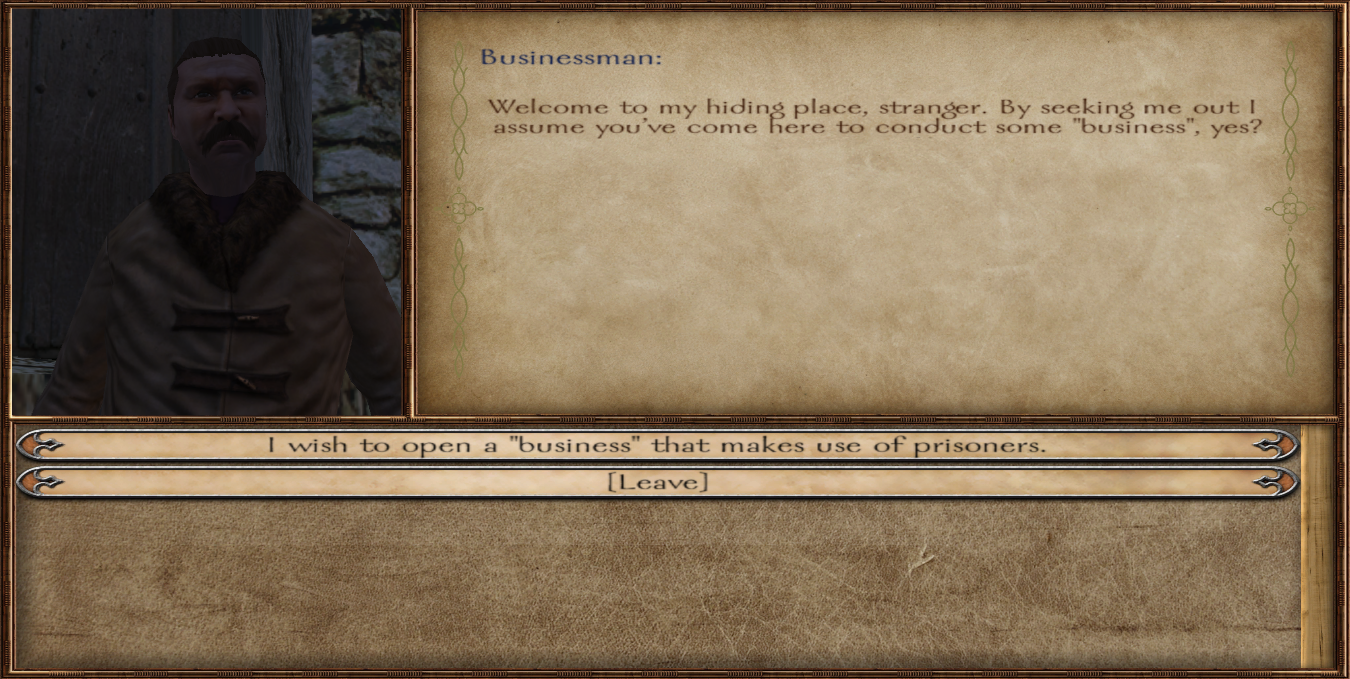 Somewhat similar to Dickplomacy's brothel system, this "Businessman" will open several locations to make use of your prisoners for manual labor or other purposes. This includes salt mines, an auction hall, and many other options coming soon. Additionally, criminal enterprises will become readily available once a certain notoriety has been reached. Ever grit your teeth at frustration the Guild Master won't give you any land? No problem! Just turn to the man above and your needs will be settled accordingly. 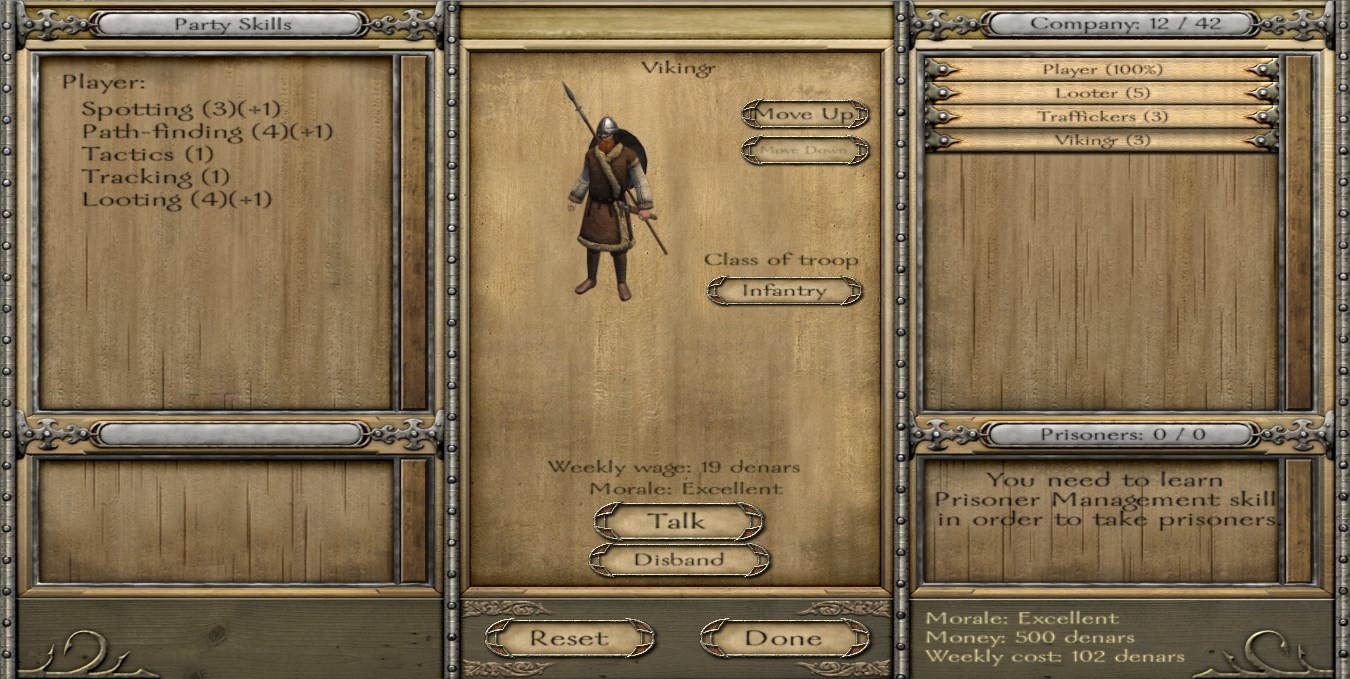 Yes, bandit captain is actually useful! v0.2.0 offers an opportunity for those looking to get their hands dirty the chance to start with a somewhat competent party. Ever try building up those Swadian Recruits and getting demolished? Just me? Hmmmm. Though a few of you doing a double take may notice something extremely different about Sea Raiders, which falls in line with below. 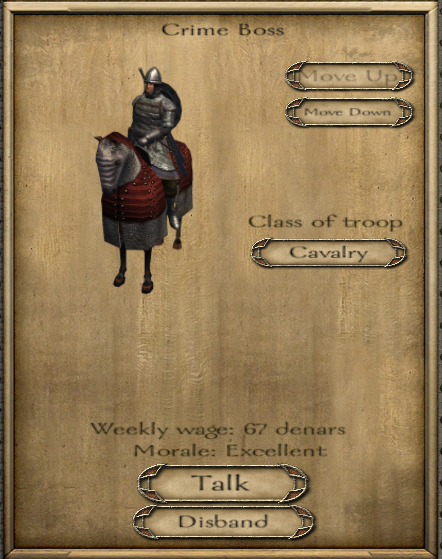 The final overview of this article lies in expansions given to those criminal troops you see patrolling around Calradia. Sea Raiders, for example, have taken on a new name, and are no longer upgradeable. As for the rather terrifying gentleman above, he remains a small example of available options waiting for the player to exploit in a furtherment of crime and chaos.

Includes fixes for things unintentionally left out of v0.1.0, and adds a few new things.

v0.1.0, first version of Modified Native, is out (hopefully not broken)!.

i cant find the files, when extracting the rar is empty.

Will this mod have Diplomacy features?

Some diplomacy elements are slated, yes, but this is a bit difficult due to some logistics regarding keeping things vanilla.

Along the same lines as the criminal expansion suggestion I made, perhaps consider adding Mercenary Companies(MCs) in as a sort of alternate goal to conquering Calradia. Each kingdom could have its own company with its own unique mercenary unit. Enlisting in an MC would be like Freelancer's enlistment, and would put you into the army of a random lord, with you upgrading through the Mercenary troop trees. With enough renown, you could eventually hire your party on as a troupe for the MC, allowing you to recruit mercenary troops and acquire the MC's unique units. Eventually you might become Head Condottierro of the MC, allowing you to expand your MC outside of the Kingdom, and engage in corporate warfare with rival MCs.

It's not working, when i try to extract, it's says no archive found..
Help... Really like to play the mod

Seeing as how you can start as a bandit captain, perhaps consider expanding the criminal troop trees and implement a criminal recruitment function.

This has quite the potential, and gives me some lovely ideas for the next version. A criminal troop trees expansion is a definite yes, though.

One way the criminal recruitment could work is to turn the existing bandit groups into a sort of alternate version of the kingdom they inhabit. If your honour sinks below a certain threshold or you choose to start as a bandit captain, you get the option to recruit criminals from villages. You could recruit forest bandits from all the villages in Swadia, or go into the Rhodok mountains and enlist rogue clansmen. Looters would have their own separate line, and would be something of a mercenary alternative, being recruited from towns rather than villages. Additionally, certain lords could use these criminal units instead of their faction's troops, hinting at their personality.

Definitely going to look into reworking the current troop entries for criminals, and I'll do my best on the second part! (no guarantees)