This mod intends to add various weapons from all around the globe to Misery mod, weapons of every stalker's dream. Suggestions, Feedbacks and points of view are very welcomed ! Have fun with these new toys !

The long awaited TAZ v2.0 is finally here! After several years of hard and dedicated work we finally present to you our best release.

THE ARMED ZONE 2.0 BETA
This is the Beta version of the mod, it will be converted to full version later after fixing any further game breaking issues.

ABOUT THE ARMED ZONE 2.0 BETA

TAZ 2.0 is a full weapons modification for MISERY 2.2.1. It took us four full years of continued and dedicated work to bring this project to this level of completion, and it is the best upgrade we have ever made to the mod.
Instead of making typical updates to old versions of TAZ, we went with a complete rework, building everything from the ground up. 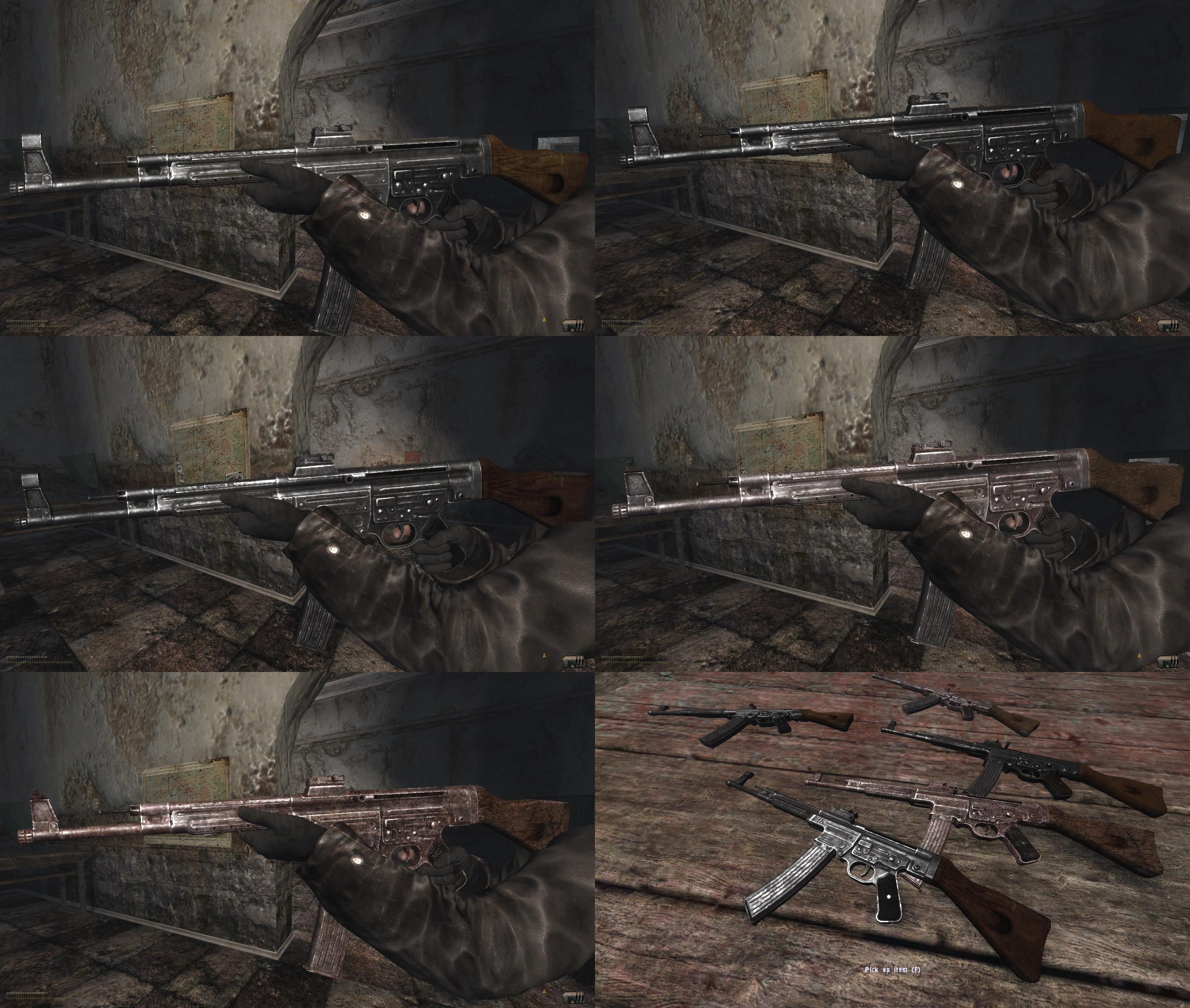 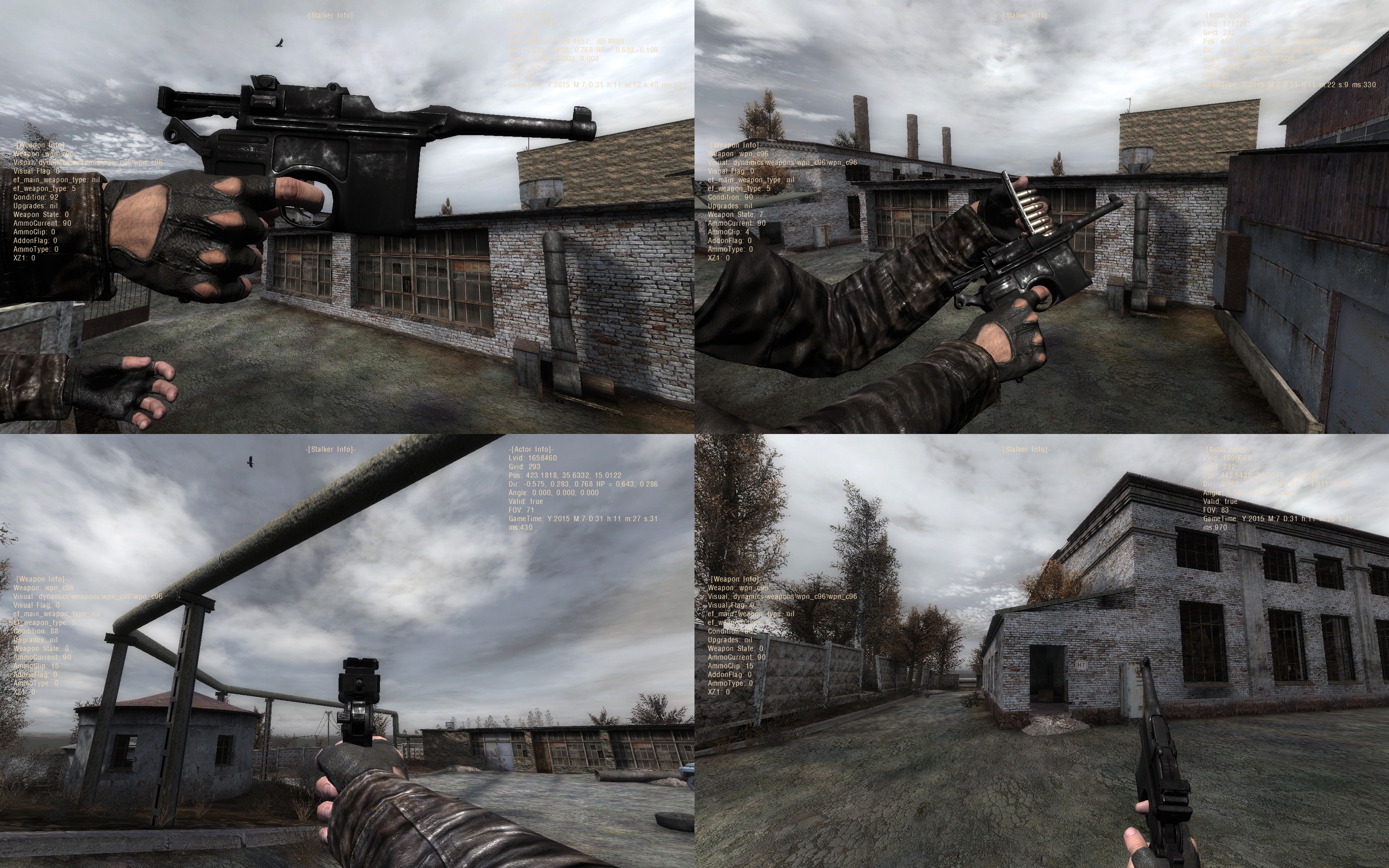 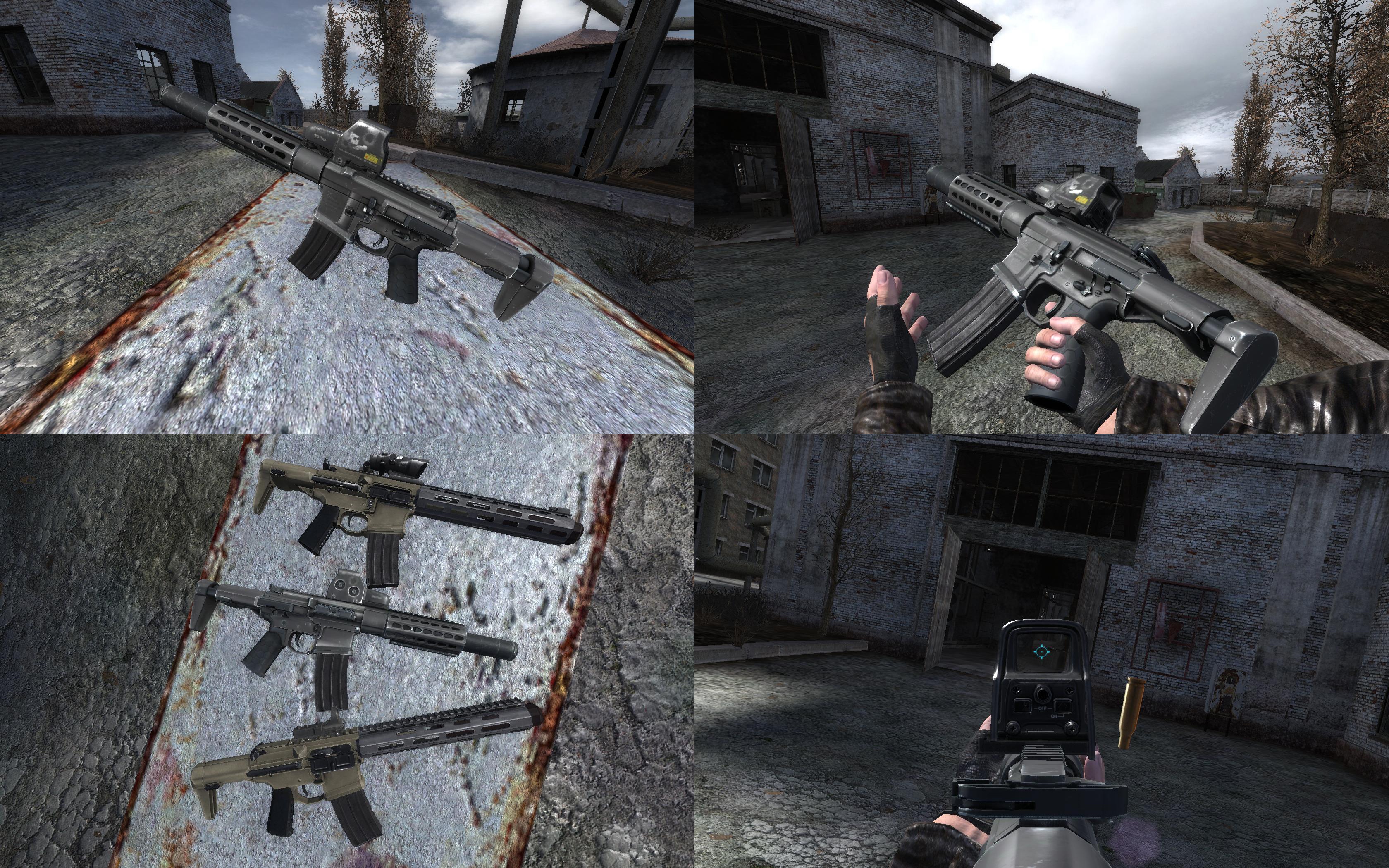 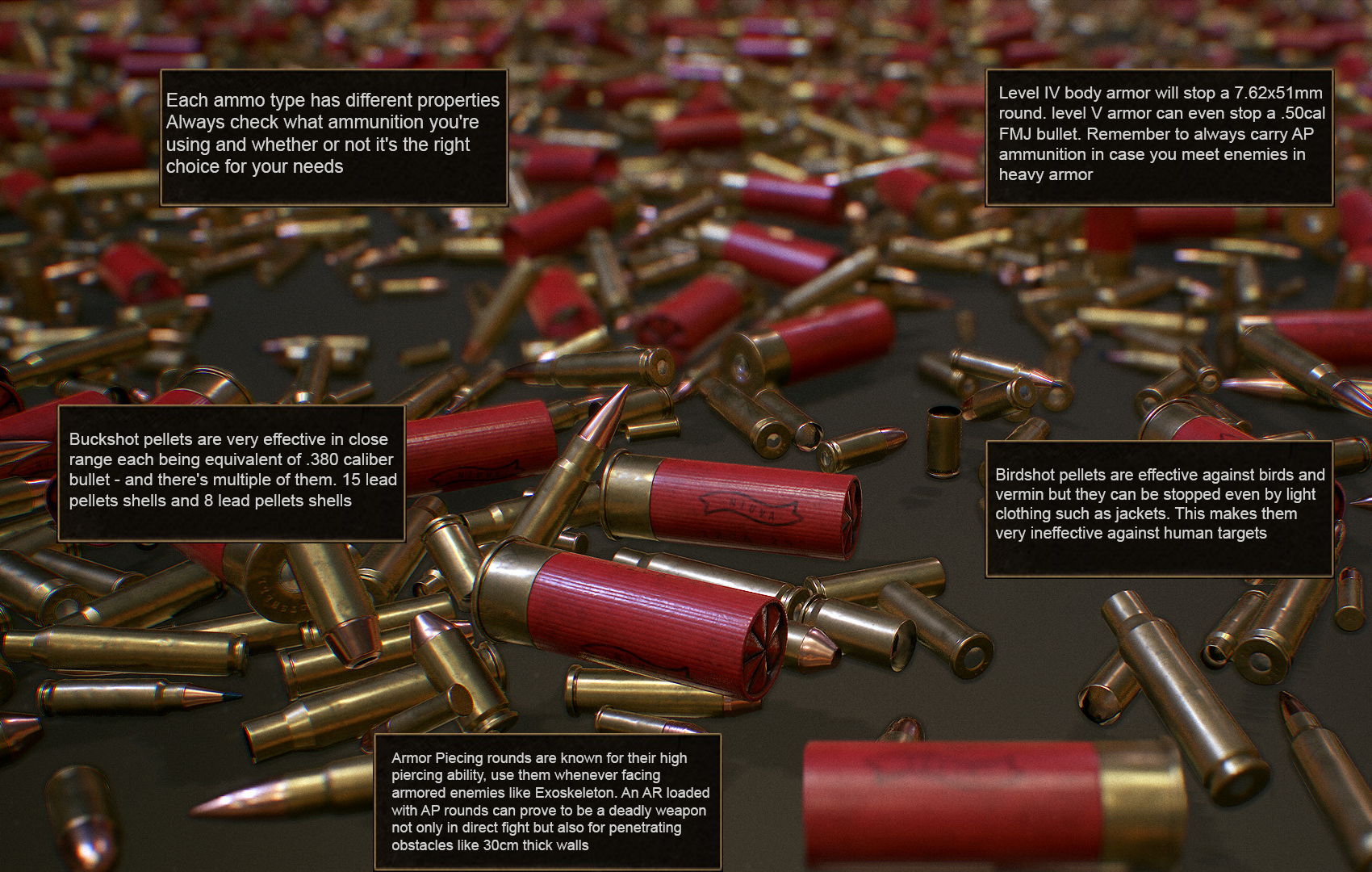 All this new ammunition is here for the sake of realism, diversity, and for a better gameplay experience.

Penetration has been revised, with good accuracy you are able to take out multiple targets with one shot, especially with shotguns thanks to their shrapnel spreading pattern, and bolt action rifles with their powerful rounds. Shooting through walls is possible, a 30cm wall can be penetrated with almost any rifle if proper ammunition is loaded, hitting whatever on the other side. Armor Piercing rounds are the best for the matter as they can easily cut through armor and walls. An M249 loaded with AP rounds is a devastating weapon for any target.

Attachments: A complete rework for attachments as well as presenting new ones. 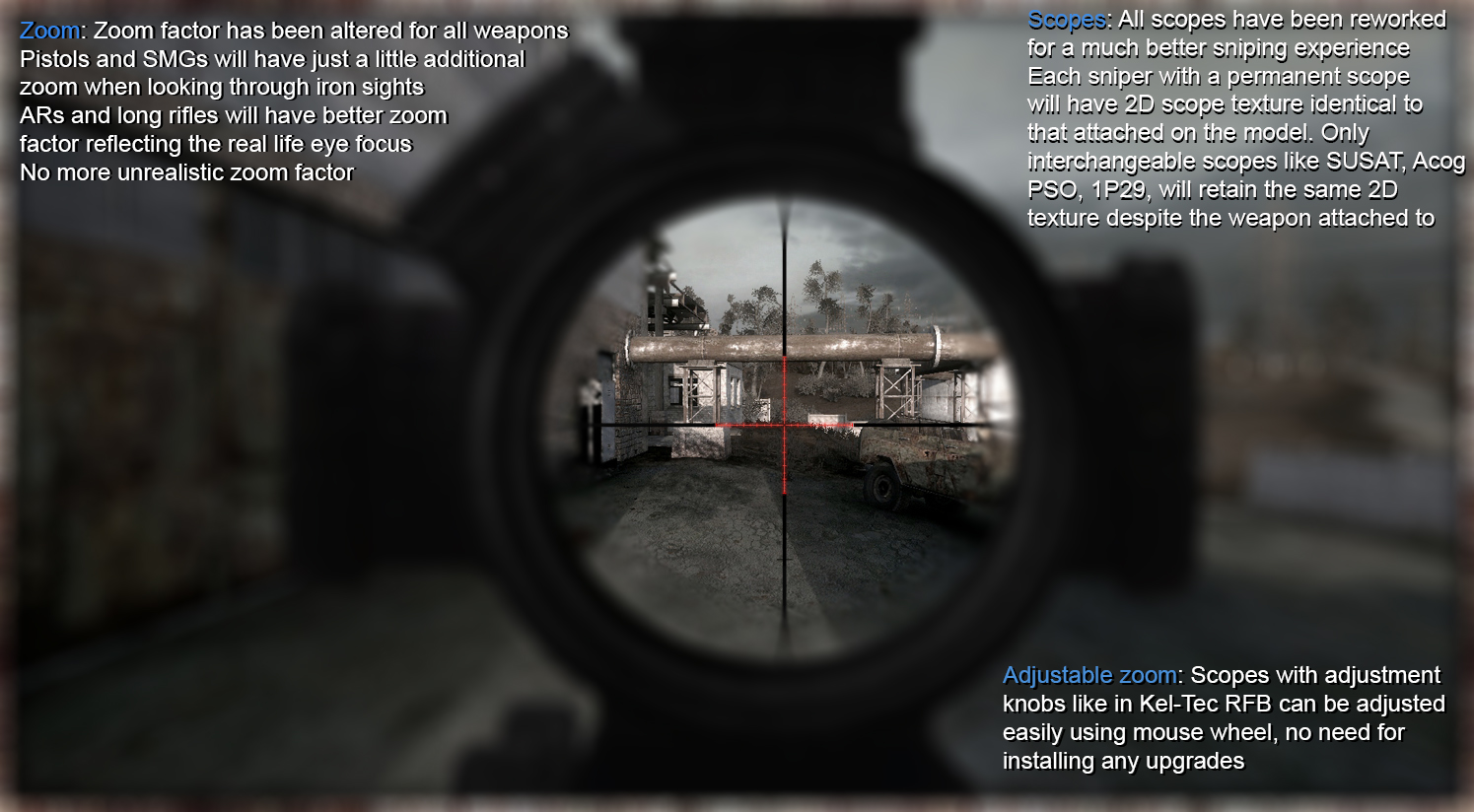 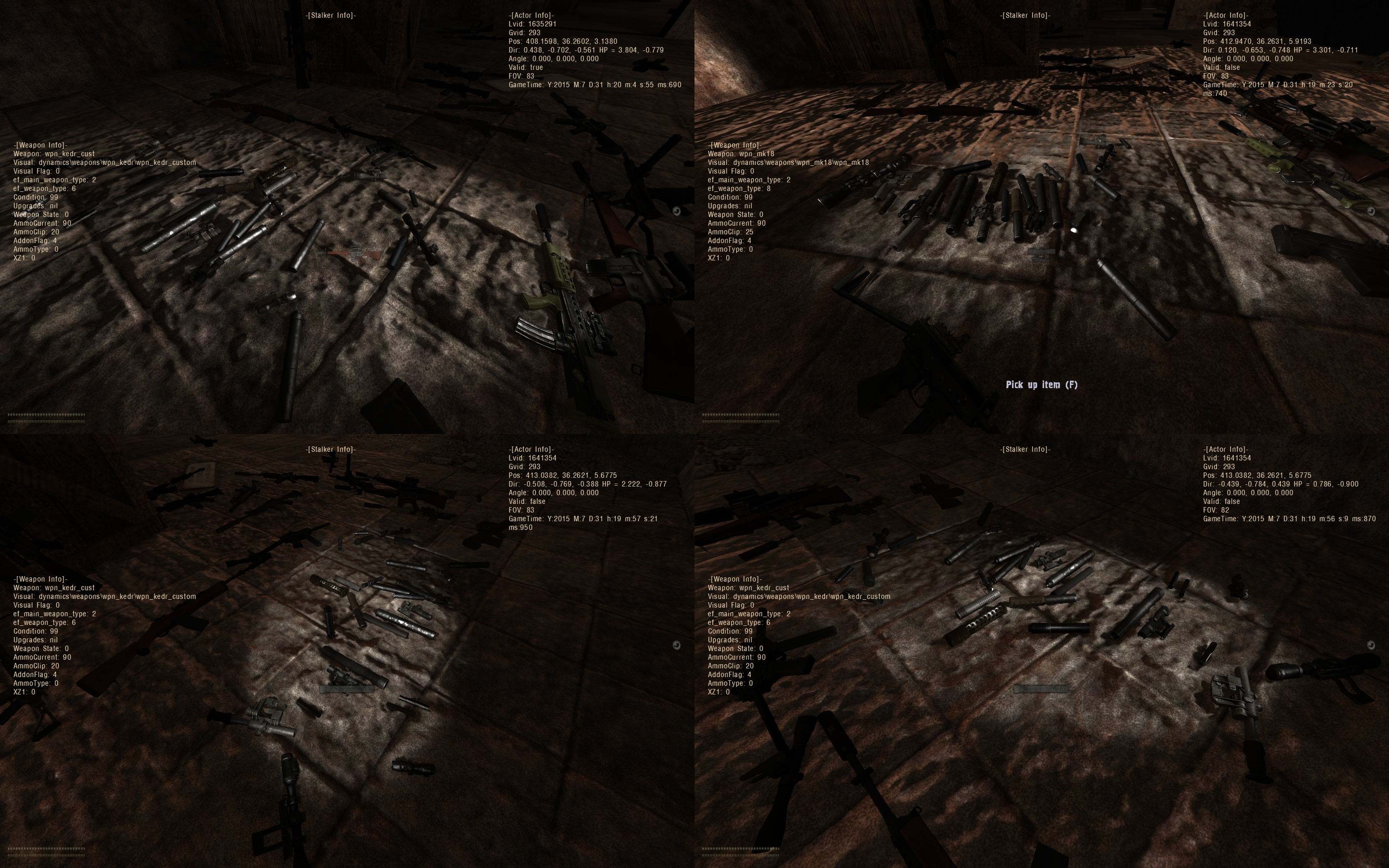 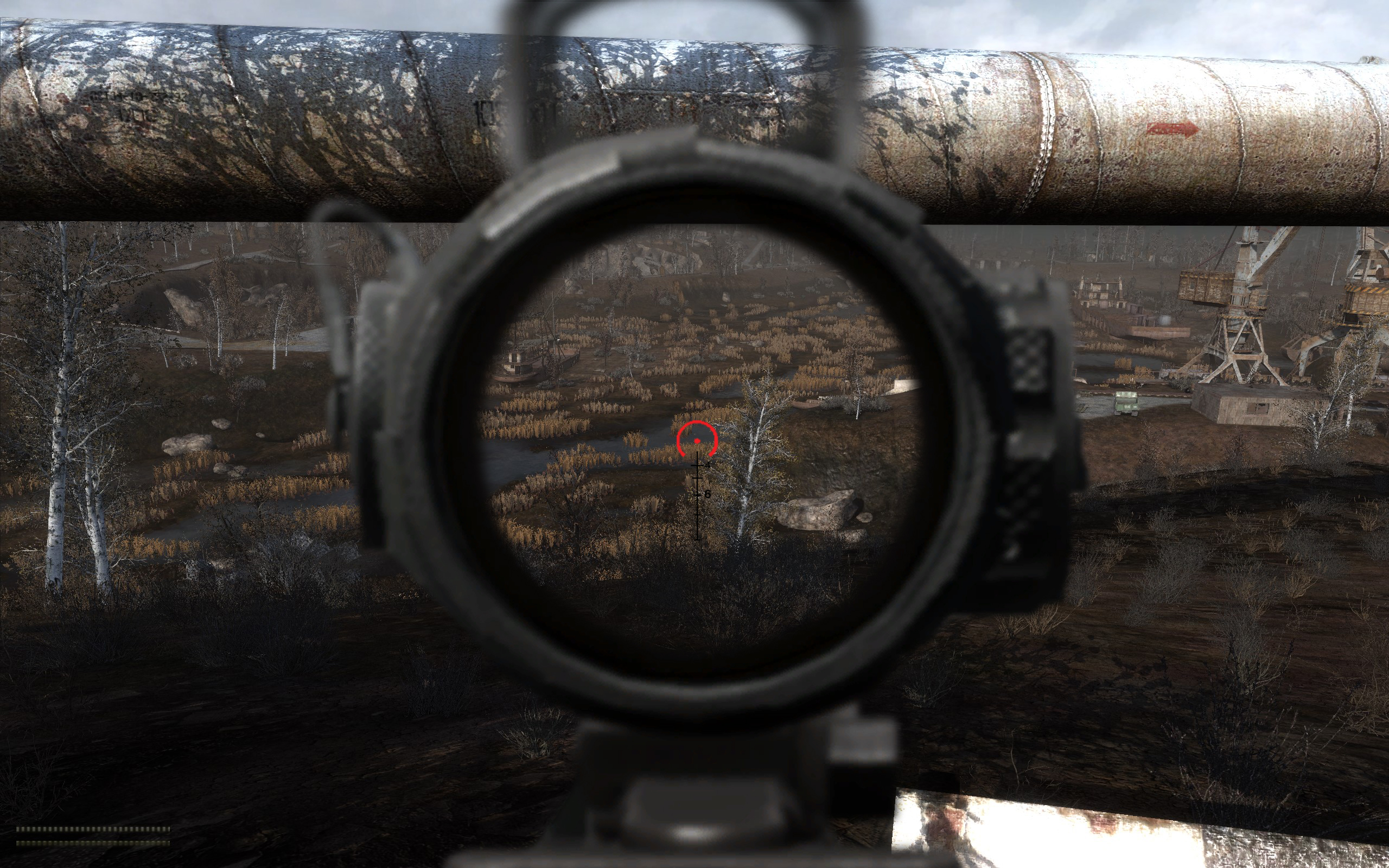 Weapon handling: All classes now share the same weapons configs, hence the same handling. Unlike in vanilla MISERY, classes won’t suffer from the weapon’s type. SMGs, Assault rifles, Sniper rifles, the three classes can handle these types of weapons and other types the same way. The main benefit from each class is their strength, endurance, running speed, carry weight capacity, hunting skills, sneaking skills, and other abilities. These perks are what differentiate one class from another, and these are the perks each player should keep in mind when selecting a class.

Weapon firepower: Damage has been reworked for all weapons. Any weapon you find has its benefits. Pistols are not as useless as they used to be, going against average NPCs does not require an AR or a powerful SMG, a SIG SAUER P226 can prove handy even if it’s chambered for 9mm calibre. Shotguns are a hunter’s weapon of choice against mutants, and with the extra shell types a hunter can go against almost any opponent given proper shells are loaded. Even the mighty chimera can be taken out using a pump action shotgun, such as a Winchester 1300, a Remington 870, a Maverick 88, or simply use the ultimate power of the AA12. 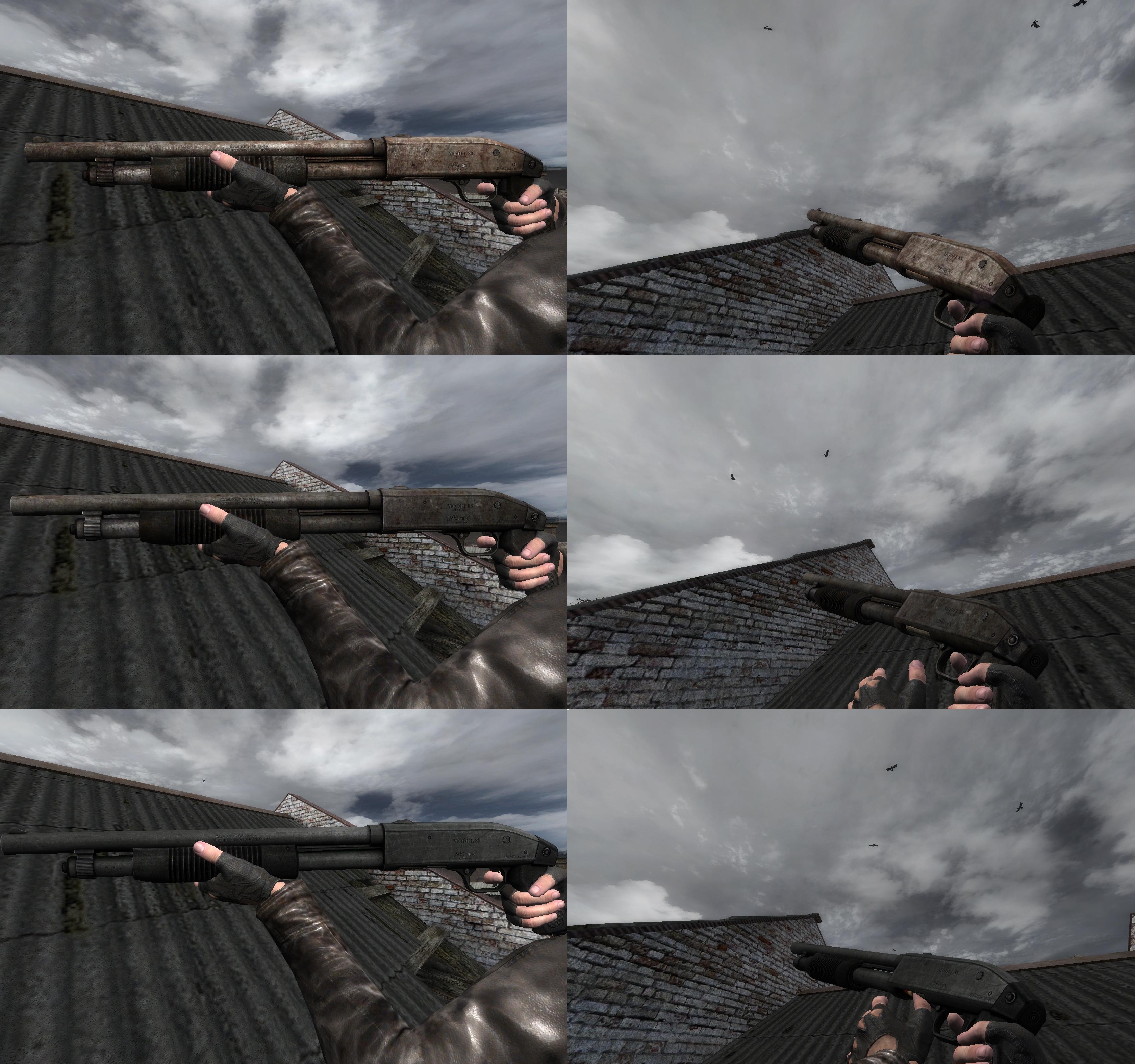 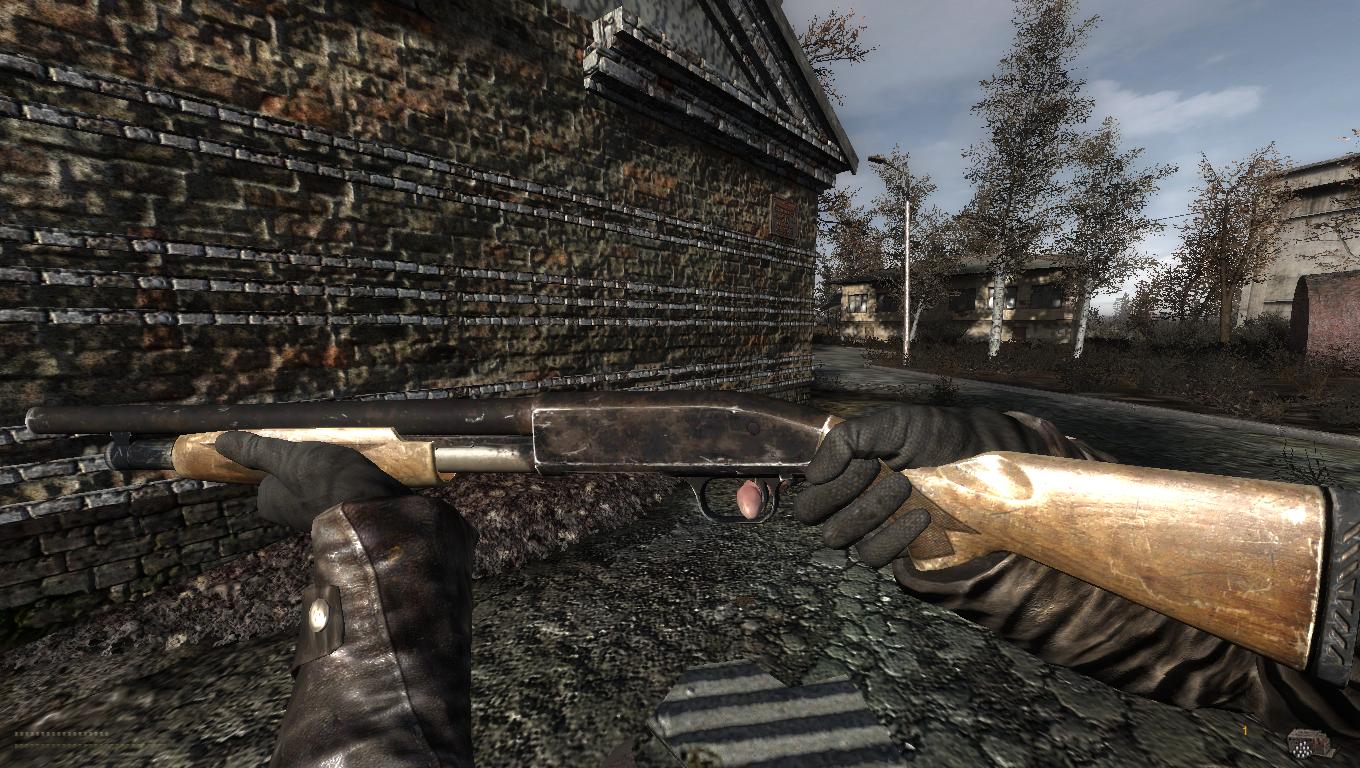 Weapon diversity and availability: Vanilla MISERY brings a bunch of weapons with single variants, such as TT-33, Saiga-12k, KAR98k, etc. TAZ 2.0 not only updates these weapons, but also brings more variants for better diversity and a richer gunplay style for the player. Exotic weapons like Beretta MX4, MG42, AA12, Barrett M82, are not easily found throughout the zone, you must either chase after NPCs for them or try your luck with a trader. Such weapons are quite hard to come by, and stalkers who acquired them are hard to come across too, only factions’ veterans and Mercs would possess such high-end weaponry. 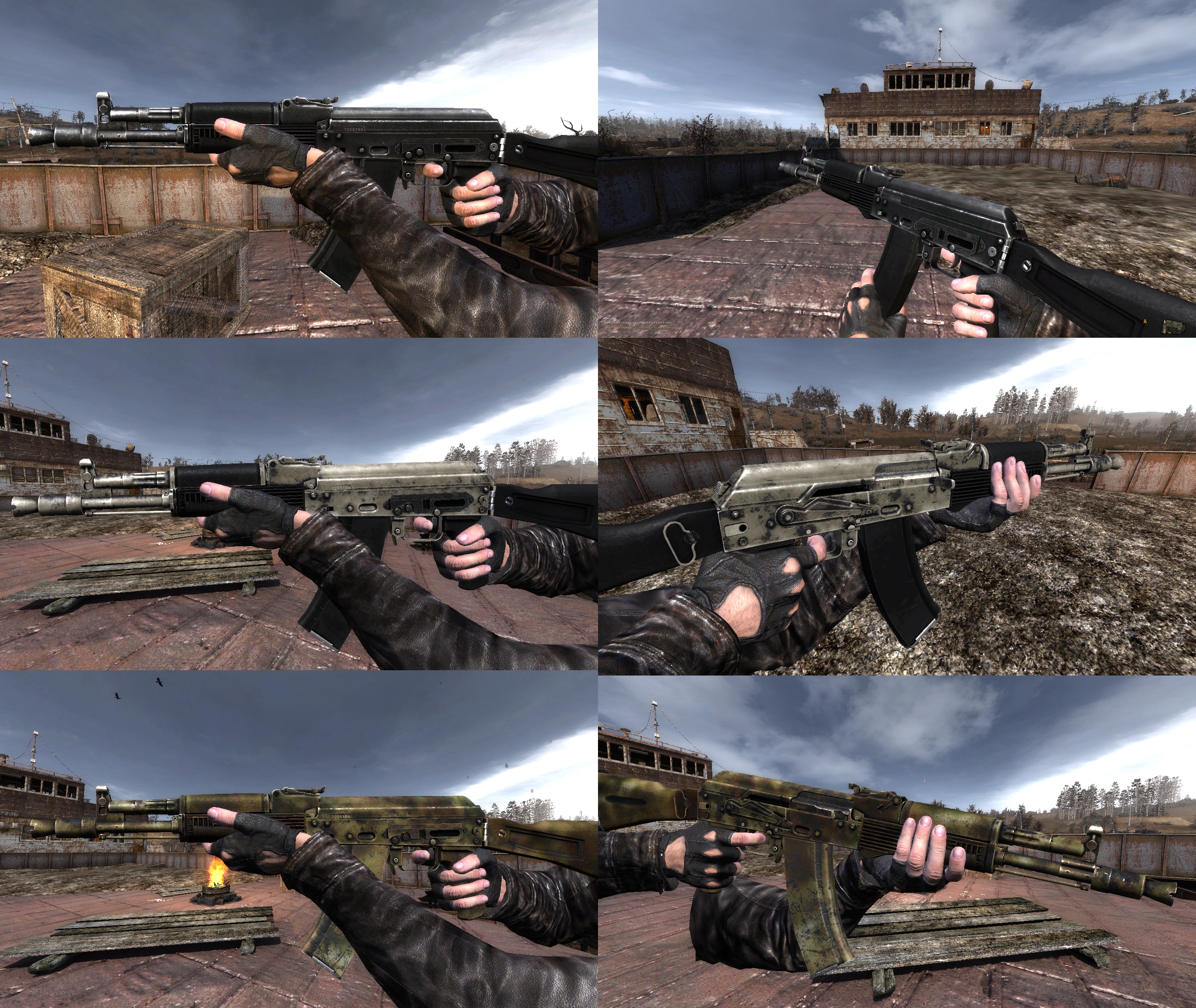 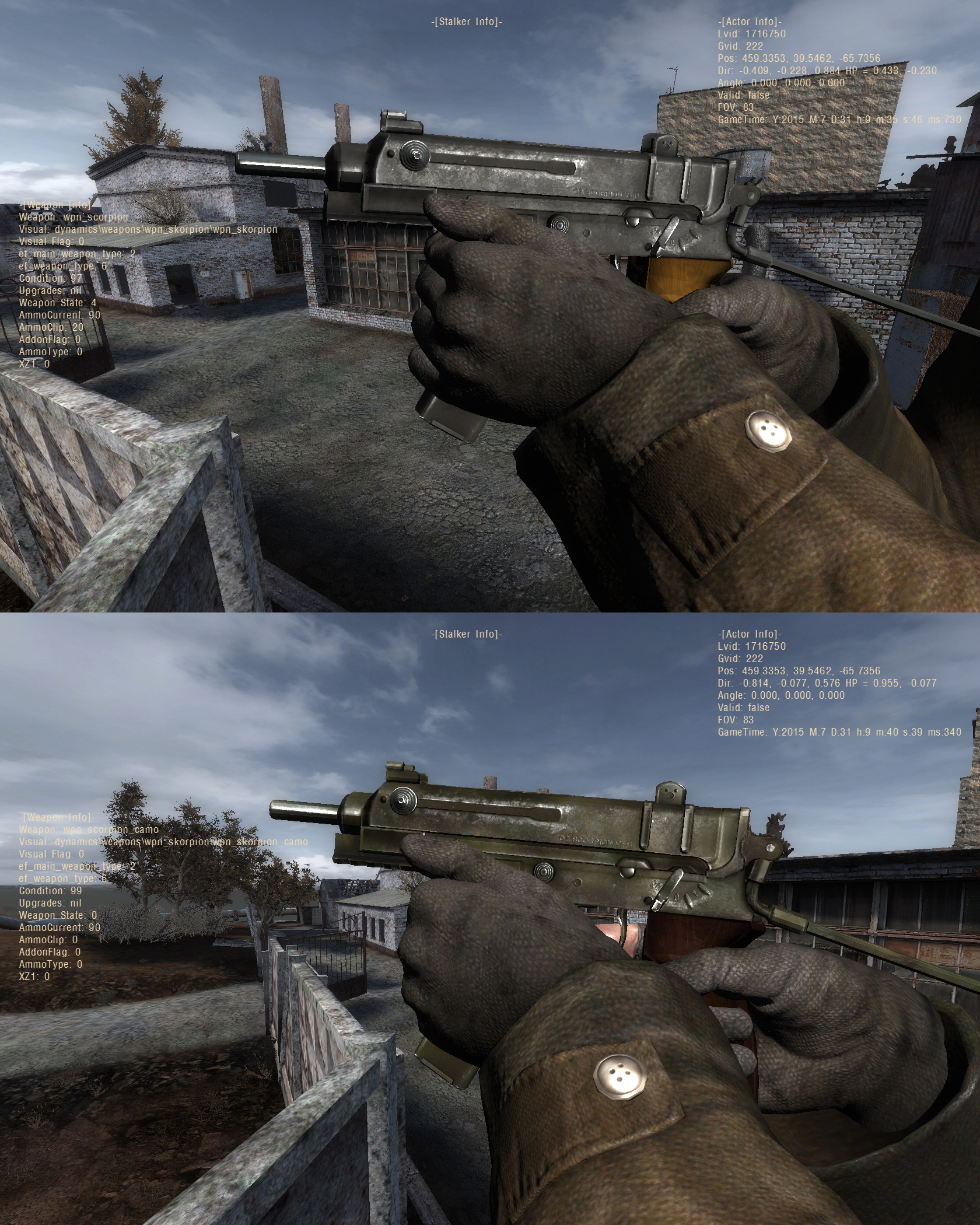 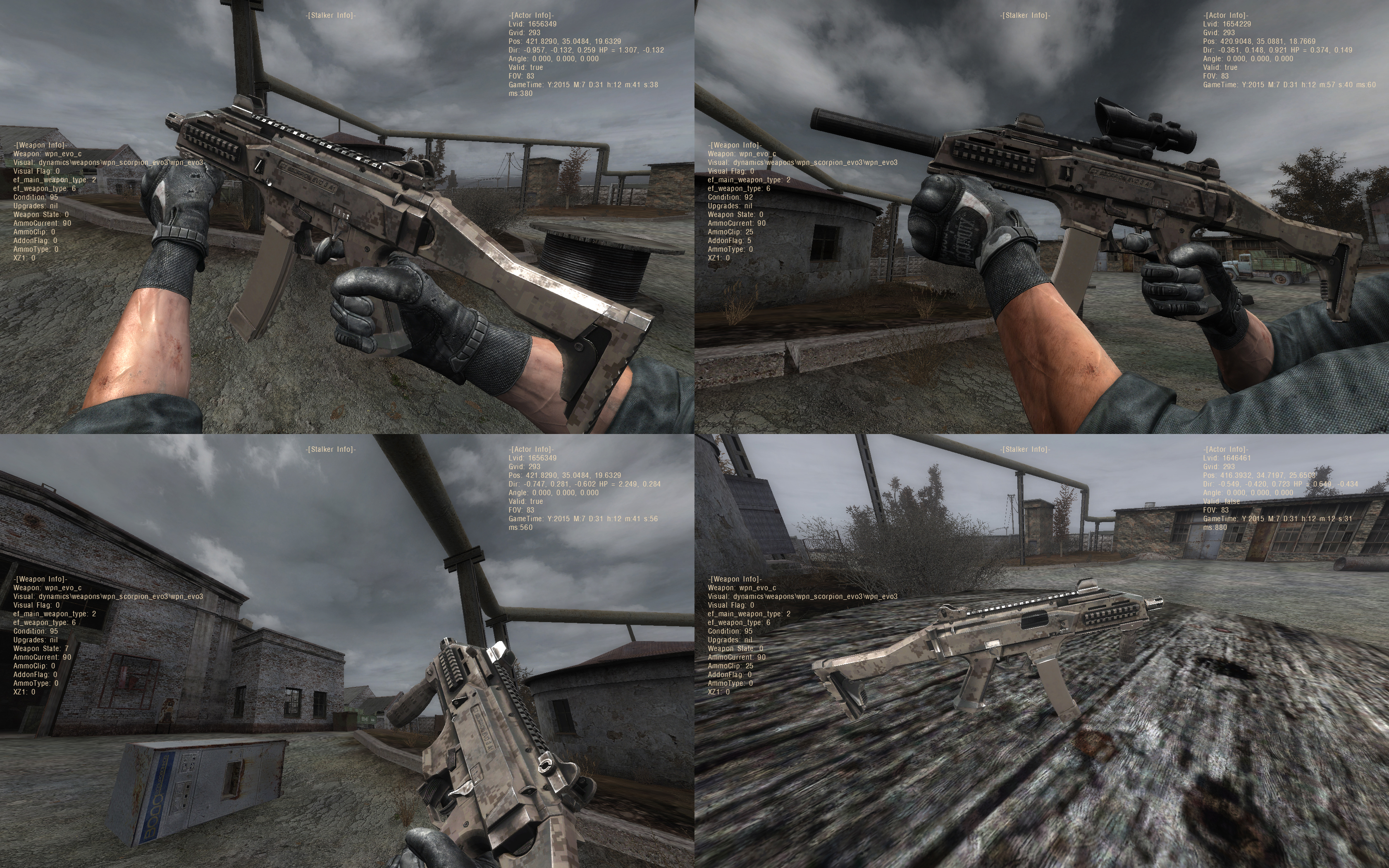 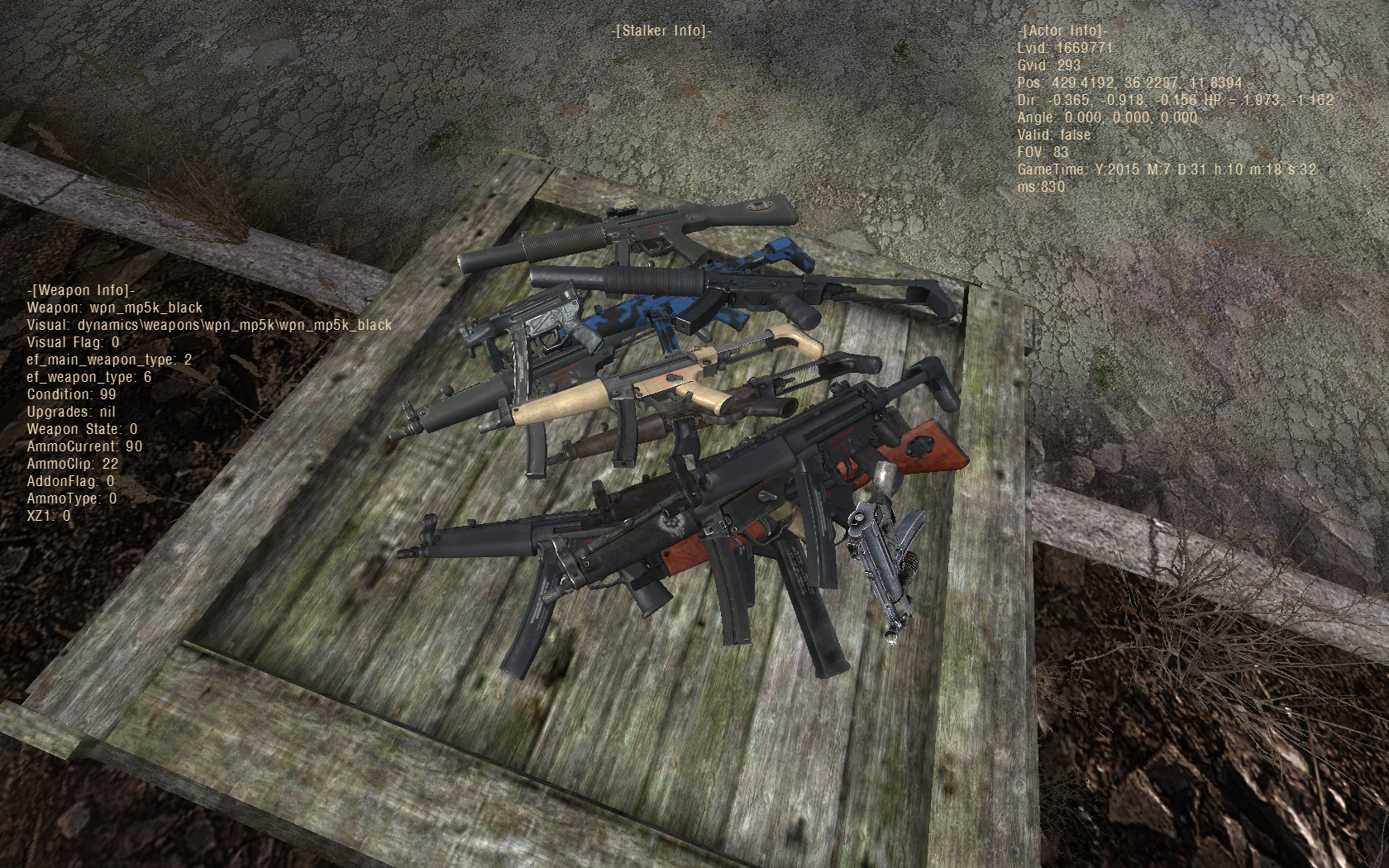 -Dynamic shooting effects: The smoke your gun creates when shooting is no more static, with the implementation of new smoke particles the effect is much more realistic now and easier on the eye.

-A set of addons is made for TAZ 2.0 and can be downloaded from here: Mega

-Check the Addons_readme.pdf file for what the addons feature.

You need to download THIS PATCH in order to get repair and dismantle scripts running, as well as several fixes, tweaks, and changes were done.

Some weapons tend to be too shiny under high settings, the current solution for this is using Object dynamic lightening settings. Delete "shader_cash" folder from appdata folder and see if this helps.

TAZ 2.0 requires more resources than vanilla MISERY, if you experience CTDs with “out of memory” reports you will have to lower your switch distance and graphics settings. 200 switch distance is ideal for Assault and Recon classes as they are meant for mid-range and close quarter combat. 250 is good for Sniper class. Anything higher will rise the chances of memory shortage and crash. Spawning hundreds of weapons and dropping them on the ground can also cause crashes.

TAZ 2.0 was created using 83 FOV, all guns were aligned and positioned for this FOV. Using anything higher or lower will produce glitched hand positions, as well as weapons clipping through the screen, and an even hard to use line of sight.

PORTING TO OTHER MODS

To report errors and bugs visit the following thread:

For questions about the mod visit the following thread:

For suggestions, visit the following thread:

Thanks to all supportive fans!

I highly recommend you guys read through this, there are some important information you need to know, especially the "IMPORTANT NOTES" section, I don't want you having crashes and reporting just 'cause you didn't read :v

Well, for those who were not reading, at least post crash report from log files in bug forum. It would be easier to iron out remaining bugs if we know exact weapons that cause CTD on repairs.

I've got one to report, heading there now.

it's absolutely normal if you think about that, in my case, as soon as i saw the release i installed and play it inmediatelly.

I had a feeling that the mod was out.
My guts were right!
Thanks! Now i can't wait for the 300 more guns in the up-coming updates!
...
...
...
...
Just joking of course, honestly, i'd prefer a port over the recent total conversions and fixes to make it a complete mod instead of being a beta.

Nice job dude, been waiting for quite a while. Worth the wait, been there since the beginning. Time for a new playthrough.

Downloading now while having tears in my eyes..... can't believe it's happening! Good huntung stalkers! :)

Splendid job, was waiting for your mod with anticipation so I can play Misery one more time. :D Thanks, this is greatly appreciated!

Have you lost four years for that?Really?

Quite a nice mod, especially with that classic Red9 handgun. Always love the VERY reliable heavy firepower that thing has in RE4 when fully upgraded with the exclusive upgrade added into it... <3

so can this only be downloaded from Mega at the moment?

You don't even realize how much I love Your choice to get rid of class-based weapon handling. IMO it was one of major flaws in MISERY, always bugging me that I'm kinda "tied" to certain weapon types for the entire game.
This change will let me enjoy the mod way more than before. Thanks!

Ikr! I always disliked that approach, no offence to MDT fellas but it was so limiting. Now with the open choices we can finally try out any gun we want and love :D

I just disliked the way it was done just reduce mouse sensitivity for further frustrations. Anyways gratz on the Beta release

You may have mentioned this somewhere before but I can't remember; how does this work with (super) ultrawide monitors?

Thank you a lot for not ignoring us potato players, I never played Misery but this mod will make me give it a first try.

Just a small thing I noticed but the inventory model for the Smith and Wesson Model 27 is a Python. Didn't actually buy it in the game though so I don't know if the actual gun is also a Python but just an observation.

Looks good...lot of nice weapons. Now it just needs a magazine loading mod to go with it and perfection.

Totally unrelated (well, kind of unrelated) question: will TAZ ever be released independently of MISERY?

Nope, TAZ is a part of Misery, can't make it for vanilla game. I heard some people are planning to port TAZ for CoC based mods tho'.

I encountered a problem with the weapon, m4A1carbine, there was a mapping error of the sighting device, and there was only a red light, I don't know whether it was the setting problem or what reason

very damn awesome looks like way better than the arsenal overhaul mod i have installed this mod have more cool weapons like XM8 and AA-12 looks like still unstable so i gonna wait for a more stable version of the mod i hope doenst get too long keep the great work.

Congratz for the release my man!