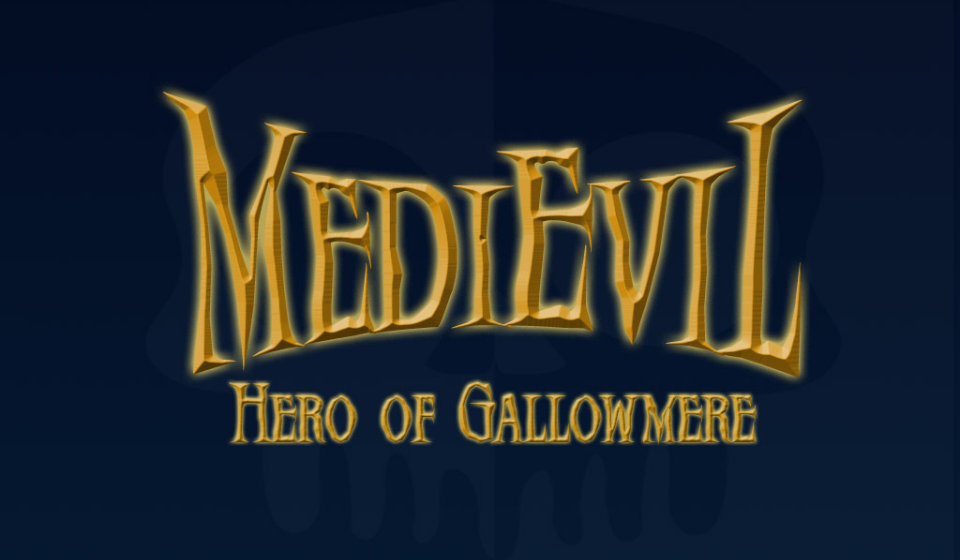 MediEvil: Hero of Gallowmere is a fan based project that aims to recreate the first four levels from MediEvil game (PSX).
Get in the shoes of Sir Daniel Fortesque, a long deceased knight that just got resurrected! Explore the land of Gallowmere on your quest to catch Zarok, an evil sorcerer that stole the souls of the living and used them to rise the dead (including you).

What is MediEvil? - (not so) short info about the inspiration for this mod:

MediEvil is an action-adventure video game and the first installment in the MediEvil series. It was developed by SCE Studio Cambridge and published by Sony. It was released on October 9 1998 in Europe, October 21 1998 in North America and on June 17 1999 in Japan for the PlayStation.

During the game, the player must go through several places, from a graveyard full of zombies, to a flying ghost ship full of undead pirates, to a levitating board in an enchanted forest surrounded by flying demonettes. There are also several collectible items found in the levels which have to be collected in order to proceed to further areas or levels. There are several books placed upon stands all over areas in the game which may offer advice to Sir Dan, while some others contain humorous jokes or generally the history of the area. Some of them are placed in hidden places, but they are mostly found along the path that Sir Dan takes.

The game starts with a flashback in the 13th century in the fictional Kingdom of Gallowmere. The game puts the player in control of Sir Daniel Fortesque: the reanimated skeletal remains of a deceased champion knight whom history holds in high esteem, due to his supposed heroics in battle against the evil sorcerer Zarok who, in 1286, had raised an army of demons and set out to take over the kingdom. The legend has it that Fortesque lead the King's army into battle against Zarok's demonic hordes and that Sir Daniel himself killed the sorcerer during the battle - despite having actually been mortally wounded at the outset - cementing his posthumous status as the "Hero of Gallowmere" 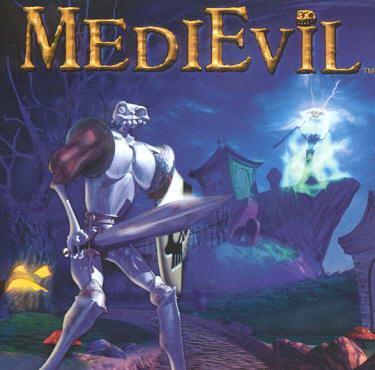 You should be able to play the mod now.

REMEMBER TO MAKE BACKUP OF YOUR FILES! ESPECIALLY SCRIPTS FOLDER!

Launch Skyrim and choose "New Game" option in main menu. Viola! You are playing my mod!
I recommend choosing the "Sir Daniel Fortesque" as your race. It's not a super big deal, but I balanced the game around it. And you know... Not choosing Sir Dan for this mod is like playing Tomb Rider with someone else than Lara Croft ^^

You can start normal Skyrim game both, before, or after beating this mod. You will have the option to start the game form the very beginning (with intro and execution scene) or from the Helgen Keep. You can go back to The End of Time and start the Medievil part of the mod anytime you want. The teleport from Skyrim to The End of Time is located in the small graveyard near Riverwood (across the river). You can also exchange the gear you collected during the MediEvil part of the mod for some higher level version of it over there.

This mod does not use quest markers. If you are stuck and you don't know what to do, look around yourself. There should be an NPC or a note nearby that will give you a hint on what to do next.

This mod is NOT compatible with most other mods that changes the starting location ("not compatible" as in- "your game shouldn't crash, but one of the mods won't work."). It is, however, compatible with Alternate Start- Live Another Life by Arthmoor, thanks to the compatibility patch (you will find it in download section).

This mod is balanced to be of medium challenge with vanilla Skyrim (on Adept level). Using any combat mods might destroy that balance, and game will become too easy or too hard (especially on Legendary or Master difficulty).

The same goes for visual mods. Any ENB, Mesh replacer or re-texture can improve or decrease the aesthetics of this hand crafted mod. Use them with caution! This mod is also quite dark on it's own, so if you are using any mods or ENB that makes things darker, you might wanna disable it.

THIS MOD IS VERY PERFORMANCE HEAVY! PLEASE TAKE THAT INTO ACCOUNT WHEN DECIDING WHAT OTHER MODS TO USE WHILE PLAYING IT!


I would like to thank everyone whose work contributed to this project. It wouldn't be what it is today without modders resources like:
-TESA Resource Kit Project
-Resources for modders by Runespect
-Modders Resource Pack by Oaristys and Tony67
-Open Books Library by stoverjm

Big thanks to everyone who allowed me to use parts of their own mods:
-Ryu Doppler (Felt Hat)
-J3X (Automatic Crossbow Script)
-quazaque (wooden furniture texture)

And thanks to everyone that supported me and all the MediEvil fans out there!

MediEvil: Hero of Gallowmere is live!

Hello everyone!
MediEvil: Hero of Gallowmere is finally released!

It was a long road. Many times not as pleasant as I would like to, but we are finally here at our destination! Let's celebrate! Who want's some screen shots? I'm gonna give you some screenshots! xD 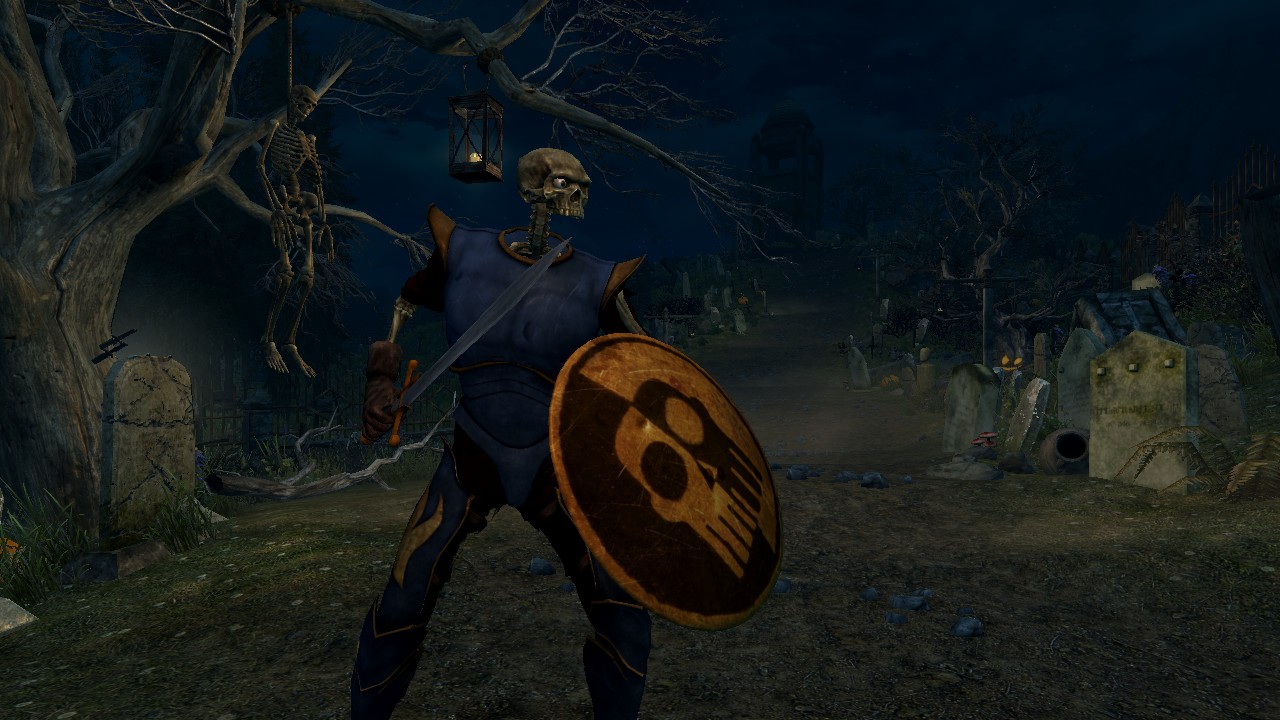 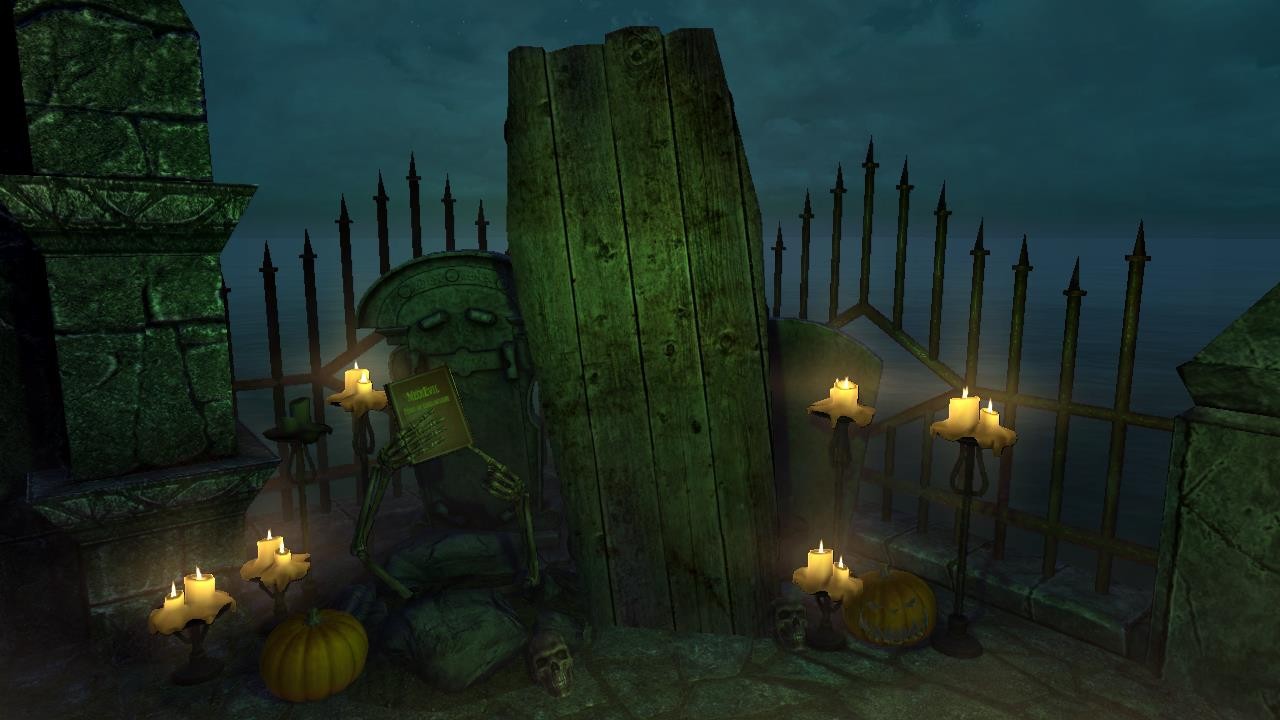 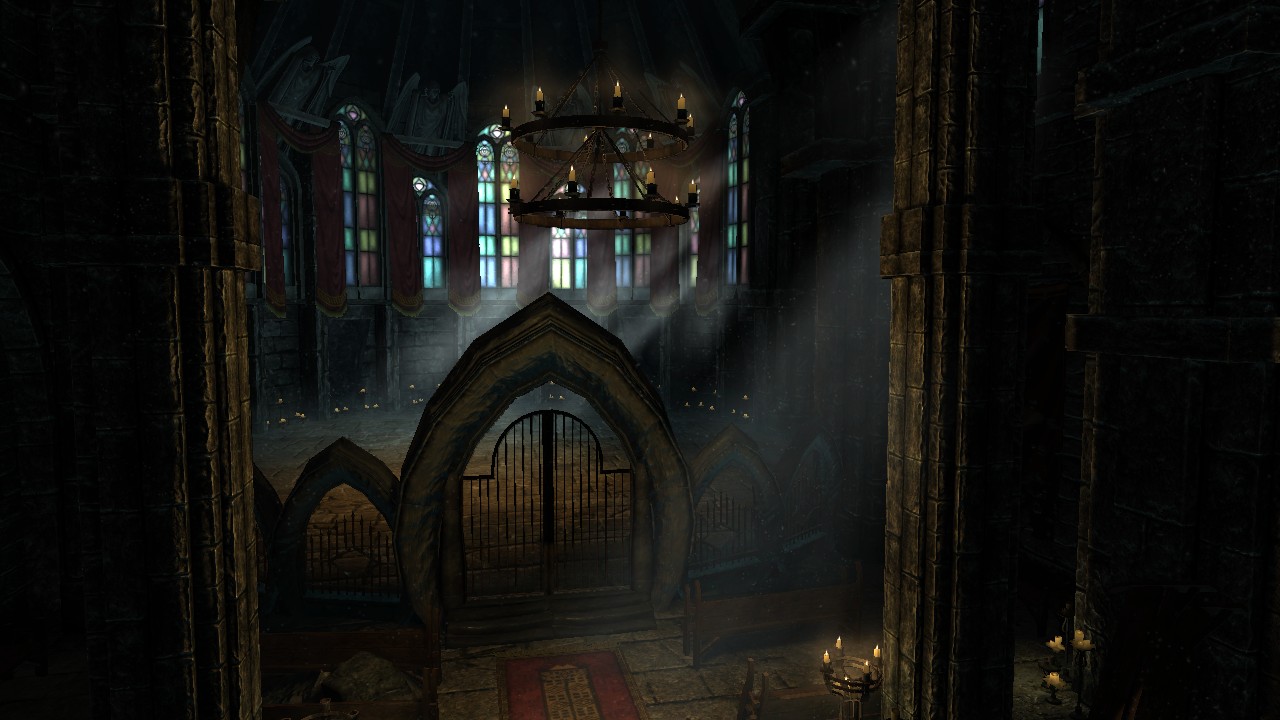 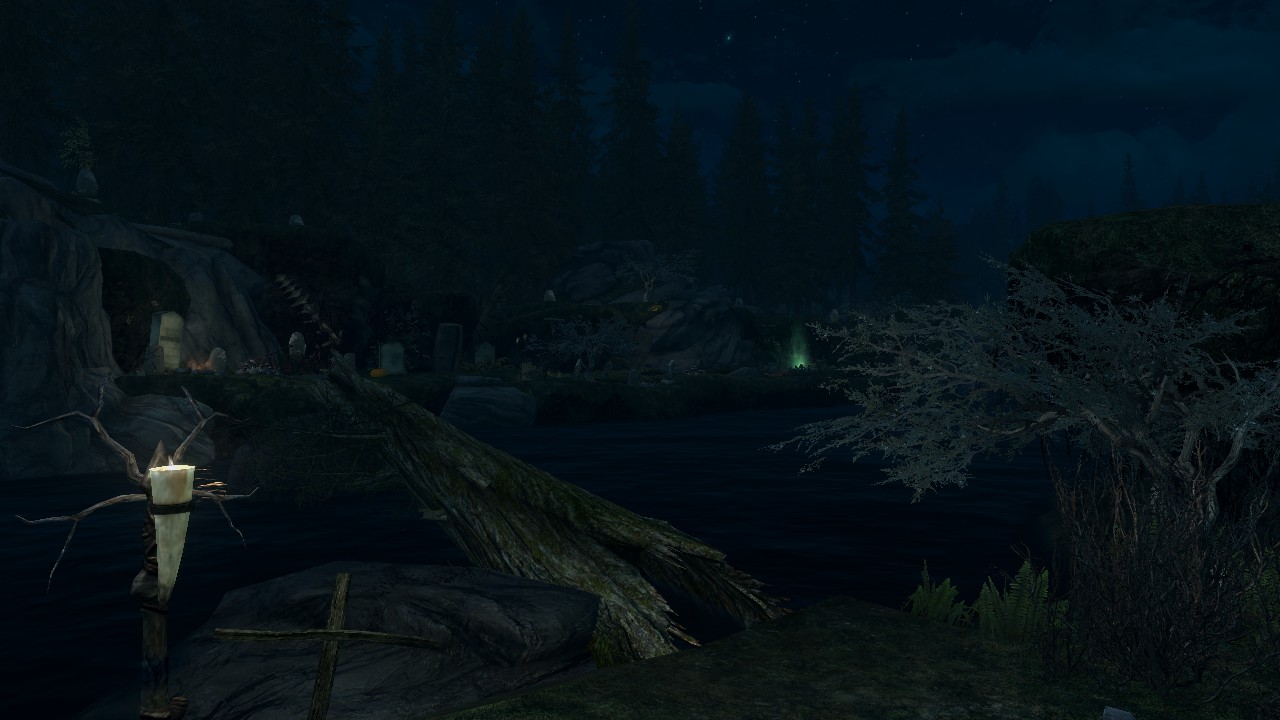 And for those who missed it, here is the trailer:

Hi! It's been a while since the last time I written something here, so I guess you guys deserve a little update.

Hi there! I need your feedback on the Stained Glass Demon fight! I'm working on Hilltop Mausoleum level and I'm slowly thinking about how should I model...

I have registered this mod on moddb just yesterday, but this project is alive for quite some time already. That being said, I decided to post the informations...

Version 1.0f of the mod in form of BSA archive. Contains all files required to play the mod (you don't need patch or loose files). If you are updating...

Just a quick patch for "loose files" version of the mod. Contains mostly bug fixes. If you are updating: You might have to start the new game for some...

Full soundtrack from this mod. All files in .wav format

This mod should ABSOLUTELY get more attention !

If you are around your 30s or older , then you probably know how much nostalgia MediEvil brings onto the table ...

And also , to author/s - you have made some amazing work here , hats off .

KorinOo you're still working on this correct?

No, I'm not. Well, except bug-fixing and improving performance, which I do from time to time...

This seems like a really cool mod. I remember watching my brother play this game when I was a little kid, so it'll be great to experience this first hand.

I've got a question though. I use this mod called Familiar Faces, which basically turns my characters into NPCs in other play throughs. Do you think a mod like that will work with Sir Daniel?

I have no idea if that would work. I think... yes? I honestly don't know. You will have to try it and see for yourself :)

ps. just remember to back up your saves, etc.

Just out of curiousity can you bring the items from gallowmere to skyrim. Amazing mod just got to the end and was curious about the items.

yes, you will find them in a small graveyard near Riverwood (there will be a chest half-buried in the ground)

I don't suppose there is or could be a way to play this without starting a new game? I mean, I could always just "coc" to the cells, but I doubt the quests would trigger correctly.

You can try. First, back up your save game. Then go to the cemetery near Riverwood and enter the portal. Few dialogues will be messed up, but it should be playable. One thing though, all your items will be removed and stored in the chest in that cemetery for as long as your are in the Gallowmere. Also, combat is not balanced (or tested) for high level character...