Behold our cleanup patch with some neat other stuff tacked on! Includes bunch of HUD changes, bugfixes, adjustments, and QoL updates! Several days later, also behold our two hotfix patches, which not only fix stuff but introduce a few more changes. Thanks to everyone involved in the tireless testing over the past several weeks!

Update 0.13.1 is now live! With that, a huge thank you to everyone that took part in both developing and testing (and that was a lot of testing) everything that's gone into this update! In short order, we've managed to squeeze in a bunch of fixes, adjustments, and improvements into what was originally going to be a cleanup patch - so now it's more like a substantial quality of life update. While we started out with just a couple bugfixes and a few adjustments here and there, we happened to simultaneously figure out some ways to improve the UI (despite the lostech that is flash) and finish implementing a good handful of other changes. Let's do a quick overview of this update, shall we?

Upon introducing that big change to how the weapon manager works in 0.13.0, we failed to notice that weapon groups wouldn't save unless you removed a weapon from a group first. It had actually always worked like that, and we only figured that out because we knew we'd never touched that part of the code before. This has now been fixed to save your group configs six seconds after you use the weapon manager in any way.Another big fix warranted by some of last update's changes is one for tank pilots getting insta-killed by high-speed collisions. To make it a little easier to understand, suppose someone (for whatever reason) crashes their ASF at max speed into a tank. That tank's pilot would get killed immediately, but the tank would be just fine. Like most hacky fixes in CryEngine, this fix should work, but there's a chance something weird might happen like the tank itself getting despawned or otherwise disappearing into the void.

Here's where we got a little carried away! Apart from the usual round of balance passes weapons and assets get with most bigger updates (and the fact that the Couger is now a bit less wide!), we've crammed in a few pretty significant changes.

Ancient Narc'd bug fixed: Some of you readers might recall that if you've been lit up with an enemy Narc beacon, you couldn't always know if you were actually Narc'd or not - sometimes there was an indicator in your HUD's bottom-center radar, and sometimes there wasn't. We've discovered that apparently this inconsistent behavior was tied to whether you were covered by allied C3 at the time of being Narc'd. Regardless of whether this was intended or not by the previous devs, in this update we've removed that check requirement, so now you'll always know when you've been Narc'd!

Max armor protection limit for all Mech variants: We've brought over the idea from Classic BattleTech's rules, but are only loosely following it. For those that like the little details, here's a table for maximum armor weights for each five-ton Mech weight increment:

Turret upgrades: The Calliope turrets got meaner and scarier; they track targets faster, have beefed up weapons, and their missiles now actually track and damage targets. Spawncamping factories should be a bit more difficult now. The Eagle Eye and Hawk Eye turrets have also gotten a little buff, now mounting the latest versions of their respective weapons and thus being a little more deadly. Reminder that these are AA turrets, so airjocks beware!

Crosshair changes: The crosshair received arguably the most changes of anything in this update, and because it involved Flash it was not easy at all. All its components have been moved closer to the center, and there's some new stuff going on as well! A heat indicator is now located to the right of the crosshair, while new lock brackets show up in the canon gold color. The crosshair itself also turns gold when over an enemy while in active radar mode.

Asset HUD updates: All asset HUDs feature a new Narc'd warning and have had the old friendly Narc/TAG indicators in the main console removed. The tank HUD now also features a breached engine warning, and the ASF/VTOL HUD has received a bunch of additional modifications: HUD elements have been moved closer to the center, the stall and "pull up" warnings have been resized for better readability, and the sea-level altitude indicator has been moved to just above the right radar display. The ASF HUD's speedometer now also shows the optimal control speed zone in blue. 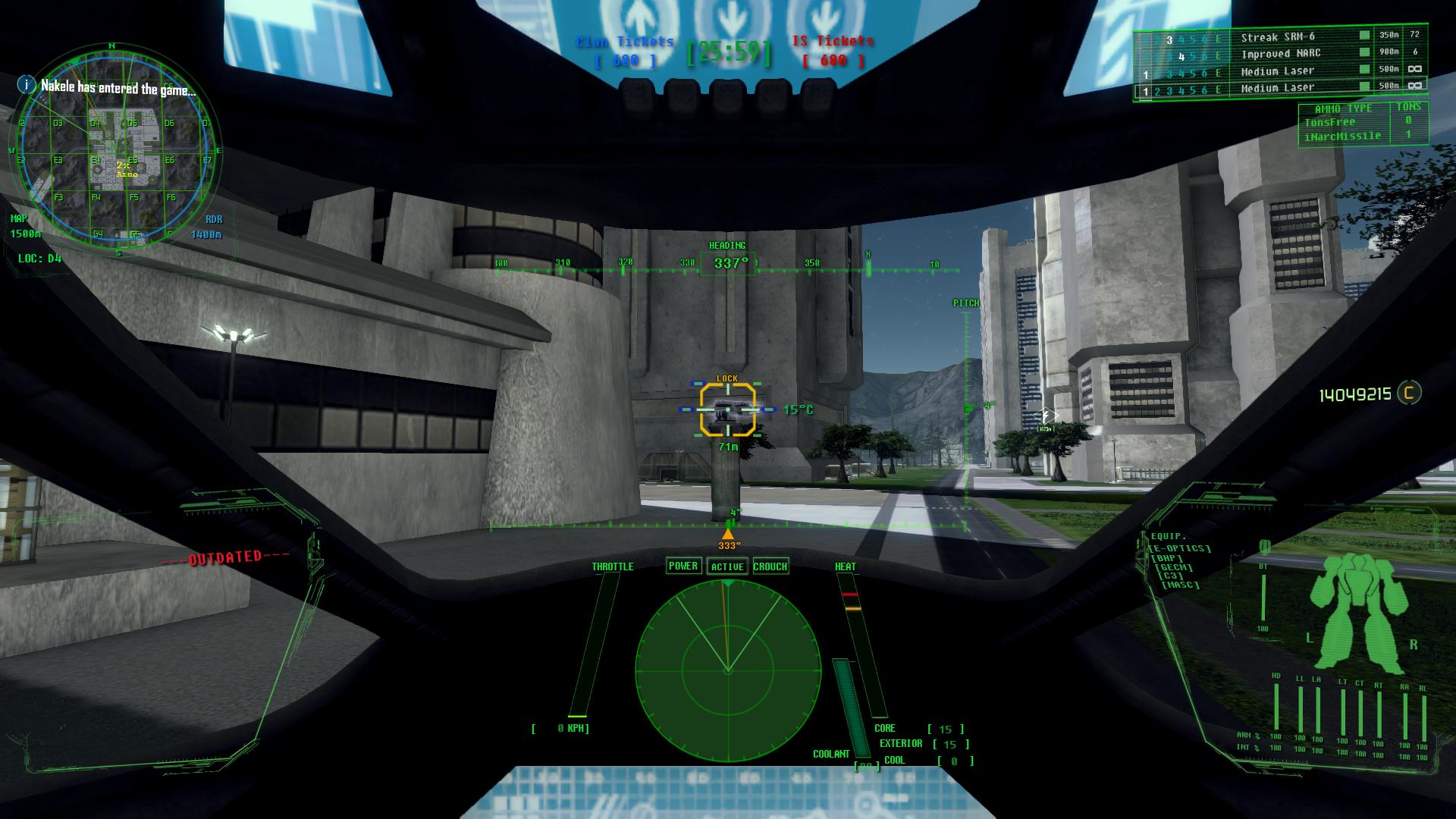 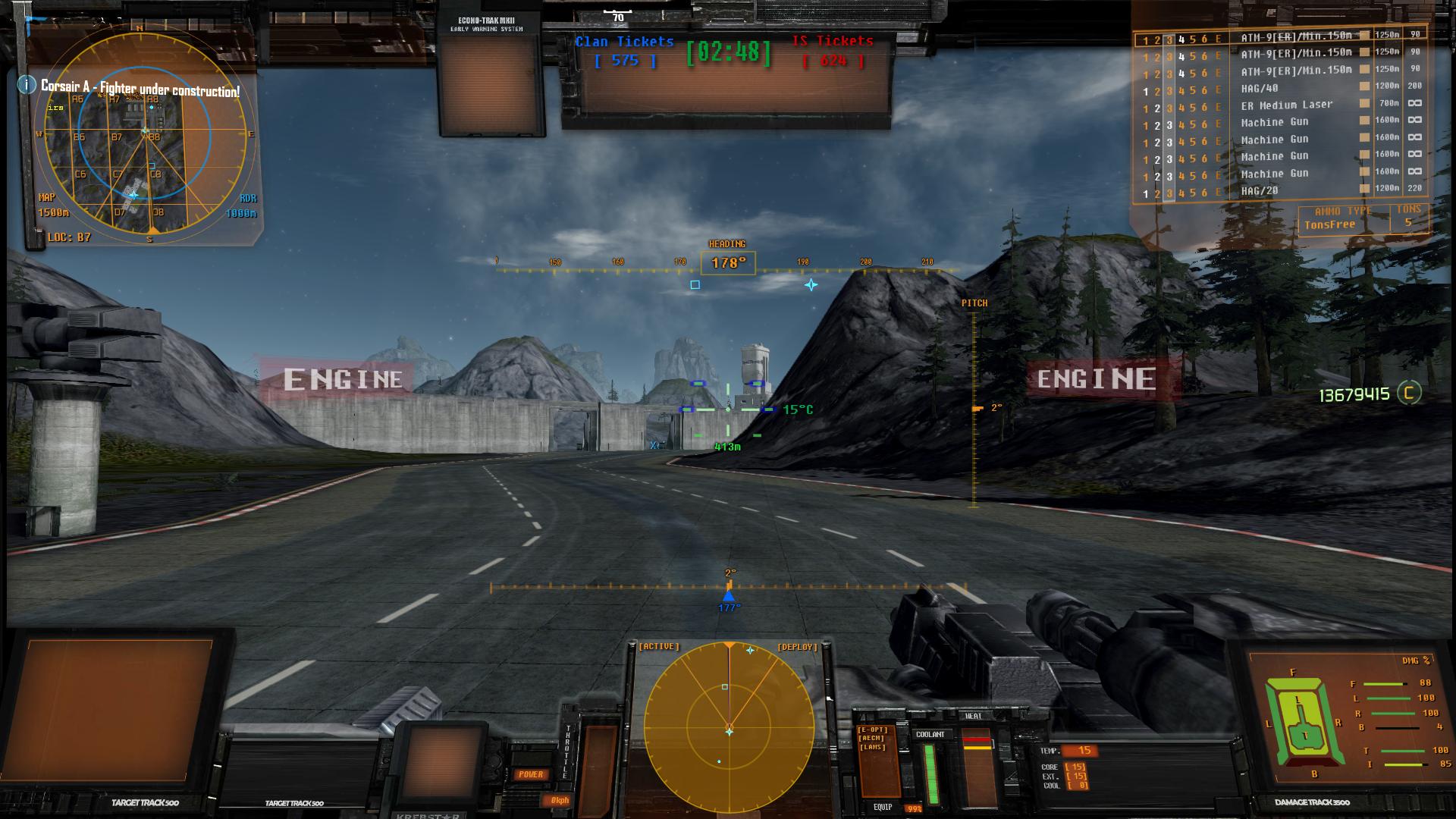 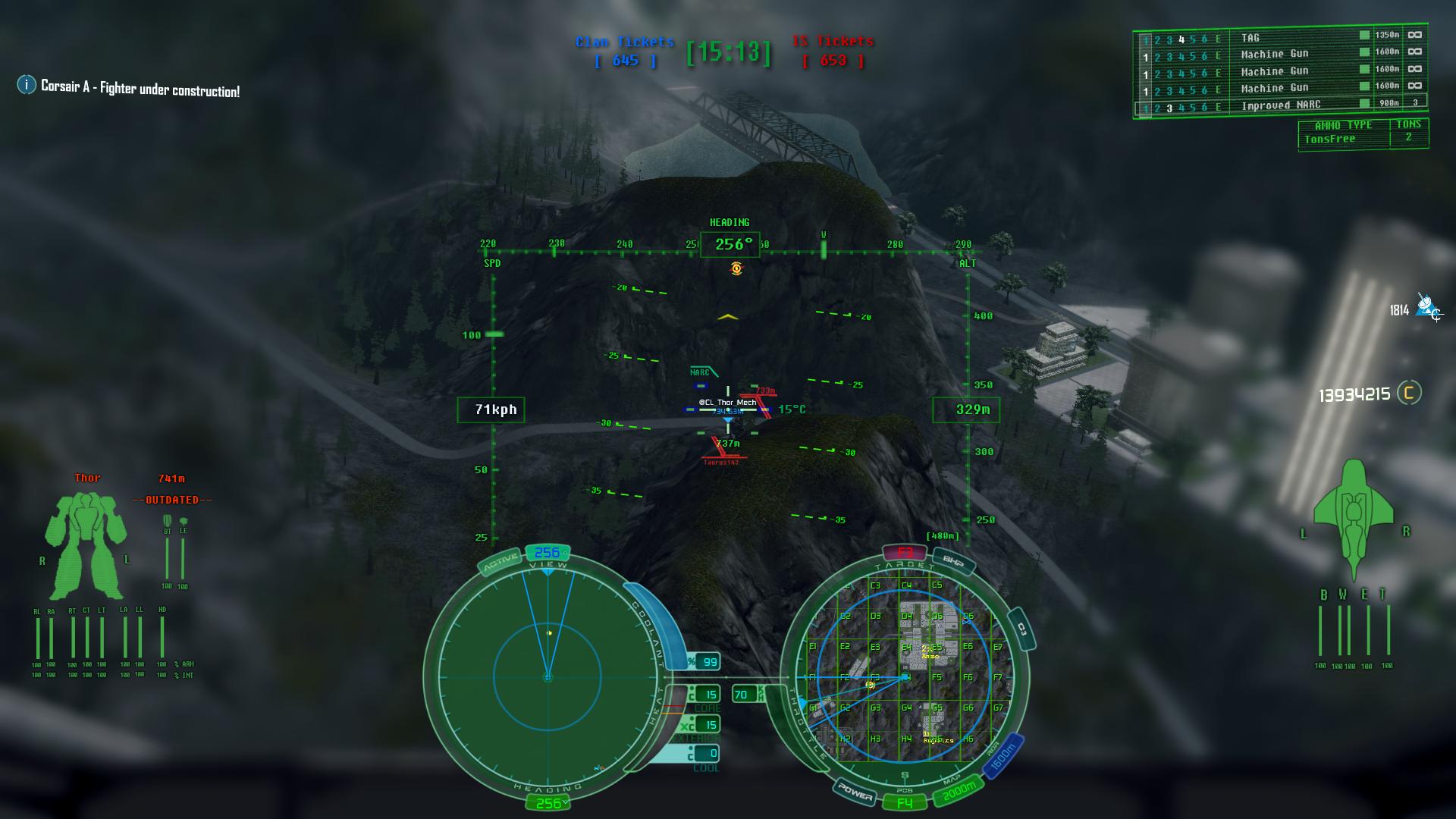 AC5 and AC10 sounds switched: Since the AC5 now fires larger caliber shells than the AC10, we've swapped around their firing sounds.

Missile launcher explosion missiles now have hit sfx: When a missile launcher explodes, you see a few missiles fly out drunkenly. Oddly enough, when those missiles hit something and explode themselves, there was never any sound for that. It's a little detail that probably got overlooked eons ago, but has now been addressed.

Several more maps got updated to support last version's new changeable time of day setting! This includes TC_Outskirts, TC_Dune, TC_Oasis, TC_Wildlands, and TC_ValleyForge. The latter two also got a new factory and beefed up main base defenses, respectively. Cool thing about maps like TC_Dune is that apparently the support for changeable ToD creates a dust storm effect throughout the map at certain times! 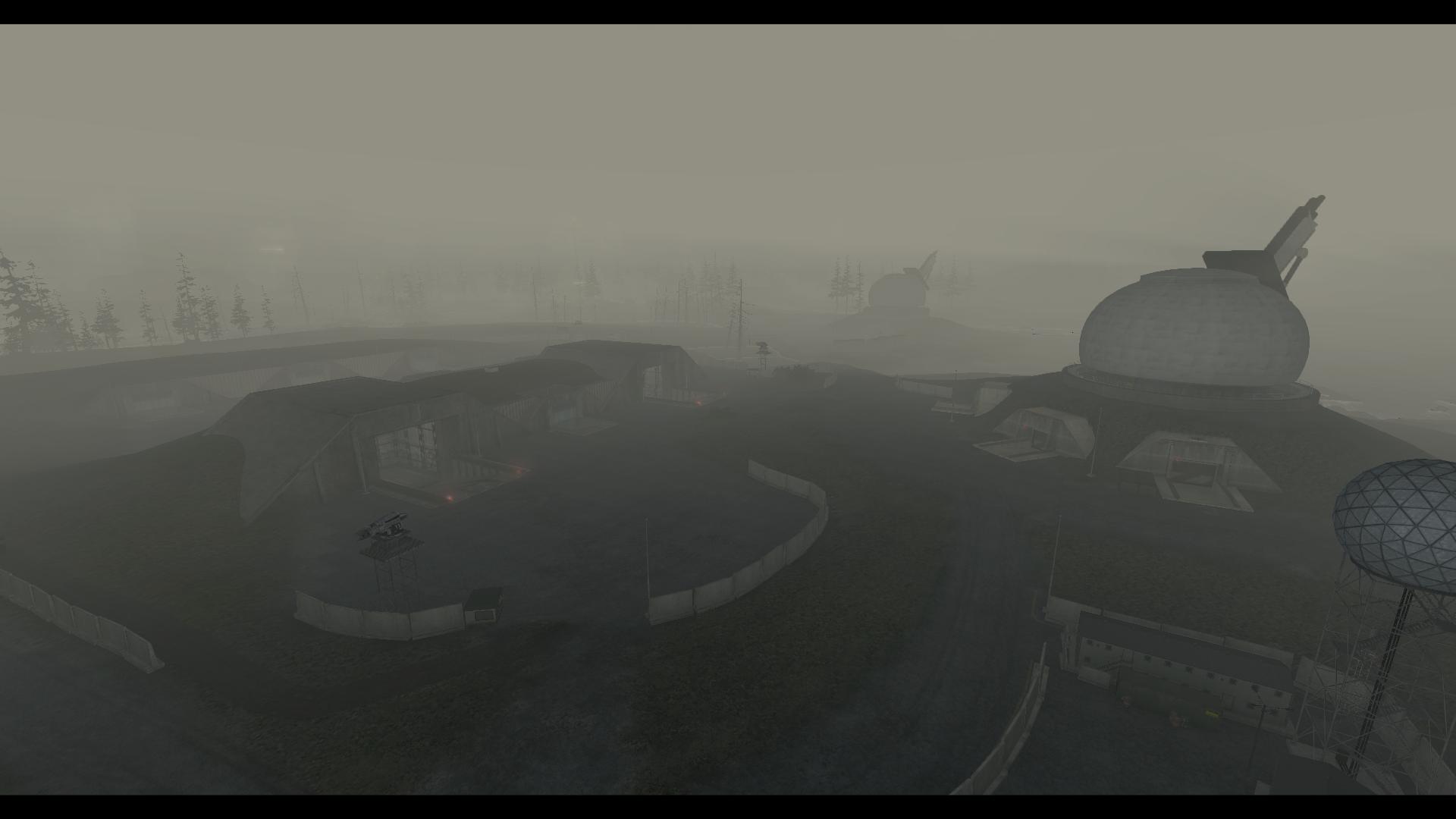 Having gotten reports of a few problems here and there, we've also released 0.13.2 and later 0.13.3 in response, hopefully making your games more enjoyable and stable than not!

Though it's only a small handful of updates, there's still a few things in 0.13.2 worth mentioning! In the way of bugfixes, the Donar's Prime and A variants have had their radar and undetectability issues fixed, and the Owens and Cougar had some floaty bits reattached. For content adjustments, apart from several variant changes, the loading screen tips have received a relevancy pass to be more in-line with the game's current state, and the Autojoin button in the team selection menu has been ripped out for the time being. We're not putting it back in until we figure out a better way to auto-assign players to teams - one that takes into account both a match's economic state (i.e. tickets) and team sizes, and perhaps other variables. Until then, we recommend you try to check the scoreboard first before deciding which team to join. Another notable change is the removal of all artillery-class assets from all factories on TC_Bogs, which means no more Long Tom shenanigans ruining your games on that map!

Lastly, the crosshair underwent another QoL-oriented update pass, given feedback since 0.13.1: the sights/reticle now shows a red outline when over an enemy, the lock brackets have been slimmed down substantially and redrawn, and the "LOCK" label now blinks rapidly. All this should make for better contrast and easier visibility.

As for 0.13.3, we received reports that all Gauss Rifles' (all classes) reload sounds were playing at absurdly high volume levels on maps or areas of maps that had reverb set up. This could actually have been loud enough to cause actual ear damage - and nobody wants that - so we released a hotfix addressing this issue.

A short glimpse ahead

After all this hard work, the dev team will be taking a break, and we probably won't see any more game updates or plans until early next year. As you might recall from last article, we aim to work out a new flight model for the VTOLs and introduce the heavy VTOLs (Anhur and Karnov) with the next big content update. Details are still quite fuzzy at this time, but if you periodically check into our community Discord server you might catch some ramblings about the progress of stuff!